Honda rider Marc Marquez reckons Yamaha, and especially MotoGP championship leader Maverick Vinales, is clearly ahead after struggling with stability in Friday practice for the Dutch TT at Assen

"It is difficult to understand everybody's pace on used tyres, but even like this it looks like all Yamaha riders, especially Vinales, are one step in front of us," Marquez said.

"We are working to try to be better."

Marquez said instability was the main problem with his Honda.

"Stability is one of the things that we have been quite happy about since [the beginning of the] season," he said.

"But here there are fast corners, also it's really windy, and the bike is shaking a lot, especially the front.

"[I'm riding a] little bit careful at the moment because I can't have a similar crash like in Le Mans.

"We are trying to understand this point, but it is difficult because Ducati is also shaking a little bit but the problem is that Yamaha is very stable.

"But I think we have another strong point and we need to work there."

VINALES FEELS AS STRONG AS IN EARLY 2017 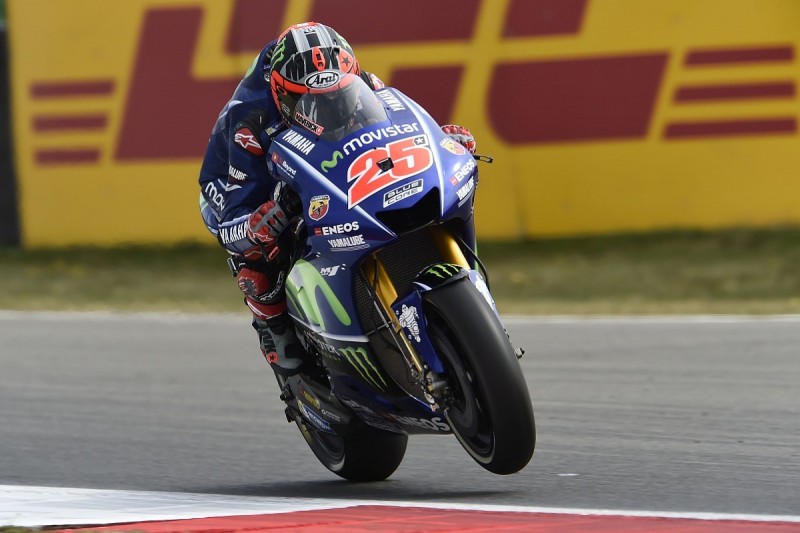 Having struggled badly at the previous round at the low-grip Barcelona, Vinales said he was relieved to rediscover the feeling that took him to race victories at Losail and Termas de Rio Hondo during practice at Assen.

"This morning I already felt good on the bike, I did many laps on the soft tyre and had a good potential," he said.

"Tomorrow still we have work to do on the tyres but this afternoon we tried all the rear tyres and also the two soft fronts just to compare and I was feeling good with nearly everything, so it's quite strange.

"The bike is working as always, I feel as strong as I felt in the first races. It's really nice to feel again like that."

Vinales had been trying a new frame, which he previously sampled post-race at Barcelona, in practice, although he said both variants of the M1 he has at his disposal were working well.

"We are trying many things here, things that we recovered from the Barcelona test," he added.

"But anyway with this grip both bikes are strong."