MotoGP points leader Maverick Vinales led the way in second practice for the Dutch TT at Assen, leading Jonas Folger by over three tenths in a Yamaha one-two

Anticipating rain, the entire grid headed out of the pits immediately when the session began in a bid to set a quick time and bank a place in the top 10, Danilo Petrucci's morning benchmark of 1m34.680s being beaten almost immediately.

Vinales was first to go under Petrucci's time with a 1m34.581s in the opening stages, although this was soon bettered by Folger, who posted a 1m33.898s on the Tech3 Yamaha.

A brief rain shower kept Folger on top of the times for much of the mid-part of the session, but with 15 minutes remaining the track was in good enough shape for riders to go out in search of further improvements.

Vinales retook the top spot on a 1m33.821s, which held until the closing moments as Marc Marquez improved to a 1m33.782s on his Honda.

But the championship leader quickly responded, setting a 1m33.696s to move back to the top and then bettering that with a 1m33.130, a full six tenths of a second quicker than Marquez. 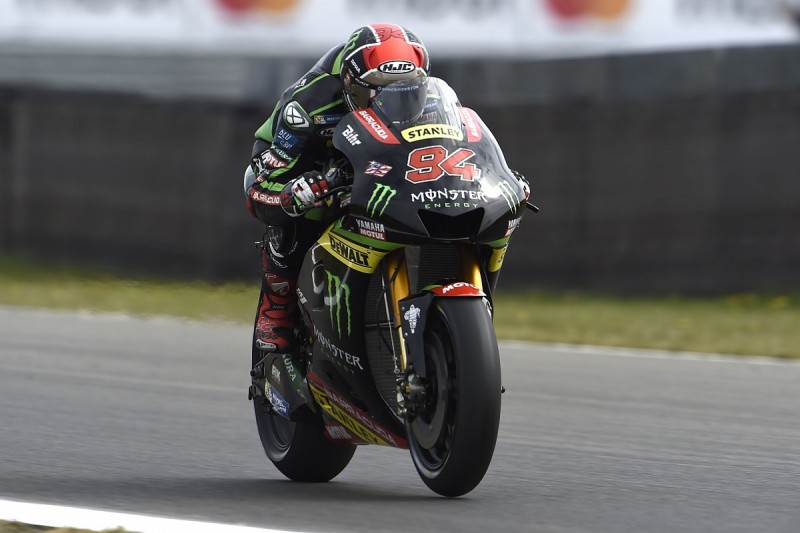 Folger was able to get back to second with a 1m33.497s to end the session 0.367s behind factory rider Vinales.

Marquez stayed third, 0.008s up on the best of the Ducatis - Andrea Dovizioso in fourth.

Cal Crutchlow was fifth for LCR Honda, 0.698s off the pace, putting further miles a new type of aerodynamic fairing that he had trialled during the morning session. He survived a major off-track moment as the rain arrived.

Missing the top 10 were cut were Jorge Lorenzo, who was 1.393s off the pace and only 14th on the second of the factory Ducatis, and Suzuki rider Andrea Iannone, who had his session interrupted by a bike problem.

Sam Lowes was the session's only crasher, the Aprilia rider going down at the fast Turn 10 right-hander on his way to the 20th best time for Aprilia.