Ducati’s Jack Miller topped a tight second practice for the MotoGP Aragon Grand Prix, while FP1 pacesetter Marc Marquez was only 20th after an early crash chasing his brother.

A late flurry of time attack laps on fresh soft rubber at the end of the 45-minute session led to a total shake-up of the order, with Miller prevailing by 0.273 seconds as just 1.273s covered the top 21 of 22 riders.

KTM’s Miguel Oliveira set the early benchmark pace with a 1m50.039s, which he soon improved to a 1m48.623s just over five minutes into the session.

Marc Marquez did briefly hold top spot with a 1m48.951s, but had this lap scrubbed for exceeding track limits.

Just moments later, the Honda rider’s session came to an abrupt pause when he crashed at the penultimate corner when he was forced to run slightly wide to avoid colliding with his brother Alex Marquez.

The elder Marquez brother wrecked his RC213V and was visibly furious with the crash, but would soon be back out on circuit on his second Honda.

While this was happening Francesco Bagnaia had guided his factory team Ducati to a 1m48.616s, but he too would crash soon after over at the tight Turn 5 left-hander.

While Bagnaia was picking his bike up off the deck, LCR’s Takaaki Nakagami and poleman from last year’s Teruel GP at Aragon shot to the top of the order with a 1m48.574s.

With just under four minutes remaining, the top of the timesheets came under attack as fastest splits started appearing for a number of riders.

The Ducati rider would go unchallenged at the top of the order, with Aprilia’s Aleix Espargaro his nearest challenger in second with a 1m47.886s. 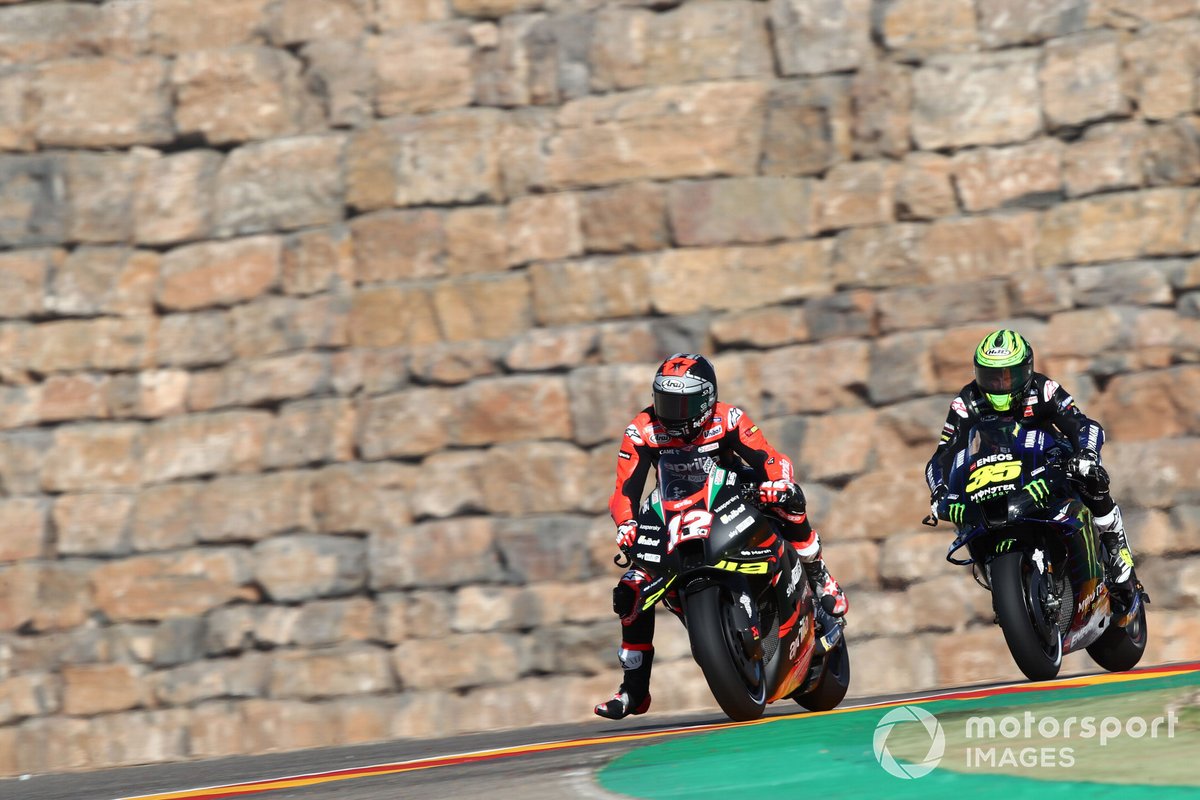 Yamaha stand-in Cal Crutchlow was an impressive third and top M1 runner with a 1m47.897s – a lap the Briton celebrated emphatically.

Johann Zarco leaped up to fourth late on ahead of Pramac Ducati team-mate Jorge Martin, while Bagnaia was sixth after his earlier tumble.

Fabio Quartararo was seventh on the sister factory Yamaha having appeared to have received an insect sting underneath his crash helmet.

The top 10 was completed by Nakagami, Enea Bastianini on the Avintia Ducati and Silverstone poleman Pol Espargaro on the factory Honda.

Alex Rins was the top Suzuki rider in 11th, though currently neither of the GSX-RRs feature in the provisional Q2 places at the end of Friday after team-mate Mir was stranded down in 21st.

He trailed Marc Marquez, whose FP1 pacesetting lap keeps him eighth overall, with Maverick Vinales just 1.1s off the pace in 19th as he continues to adapt to the Aprilia.

He shadowed Petronas SRT’s Valentino Rossi, with team-mate Jake Dixon 2.3s off the pace in last on the two-year-old Yamaha.

Lecuona found himself shuffled back to 16th in the end ahead of Oliveira, with Luca Marini on the Avintia Ducati slotting in ahead in 15th behind Danilo Petrucci (Tech3), Alex Marquez and Brad Binder (KTM).