The biggest news coming into the Aragon weekend is Vinales’ debut with Aprilia following his exit from the factory Yamaha team last month.

The nine-time MotoGP race winner – who completed a two-day test at Misano on the RS-GP prior to this weekend – was one of the first out on track and steadily chipped away at the lap times as he continues his adaptation process.

Completing 21 laps, Vinales ended FP1 in 19th and 2.1 seconds off the pace – though that gap is greatly exaggerated by Marquez’s late time attack.

Takaaki Nakagami, who took pole for last year's Teruel GP at the Aragon track, set the early pace on his LCR Honda in the 45-minute FP1 with a 1m50.283s lap, although championship leader Fabio Quartararo soon guided his Yamaha to top spot with a 1m50.185s.

Ten minutes into the session Aragon specialist Marquez shot to the top of the order with a 1m49.360s, with the factory Honda rider bettering that two lap later to a 1m49.171s.

A late flurry of quick laps at the end of FP1 led to several riders putting Marquez’s lap under pressure, but all came up just shy of toppling the Spaniard.

In the final moments of the session, Marquez elected to go out on a fresh soft slick and duly blitzed the timesheets, streaking clear at the top of the order with a 1m48.048s lap.

With almost everyone electing not to go out for a soft tyre time attack, Marquez was left to end FP1 comfortably clear of the field.

Marquez ended up 0.971s clear of Suzuki’s Joan Mir after the reigning world champion also fitted a fresh soft rear for a late blast – but had a better lap cancelled for exceeding track limits. 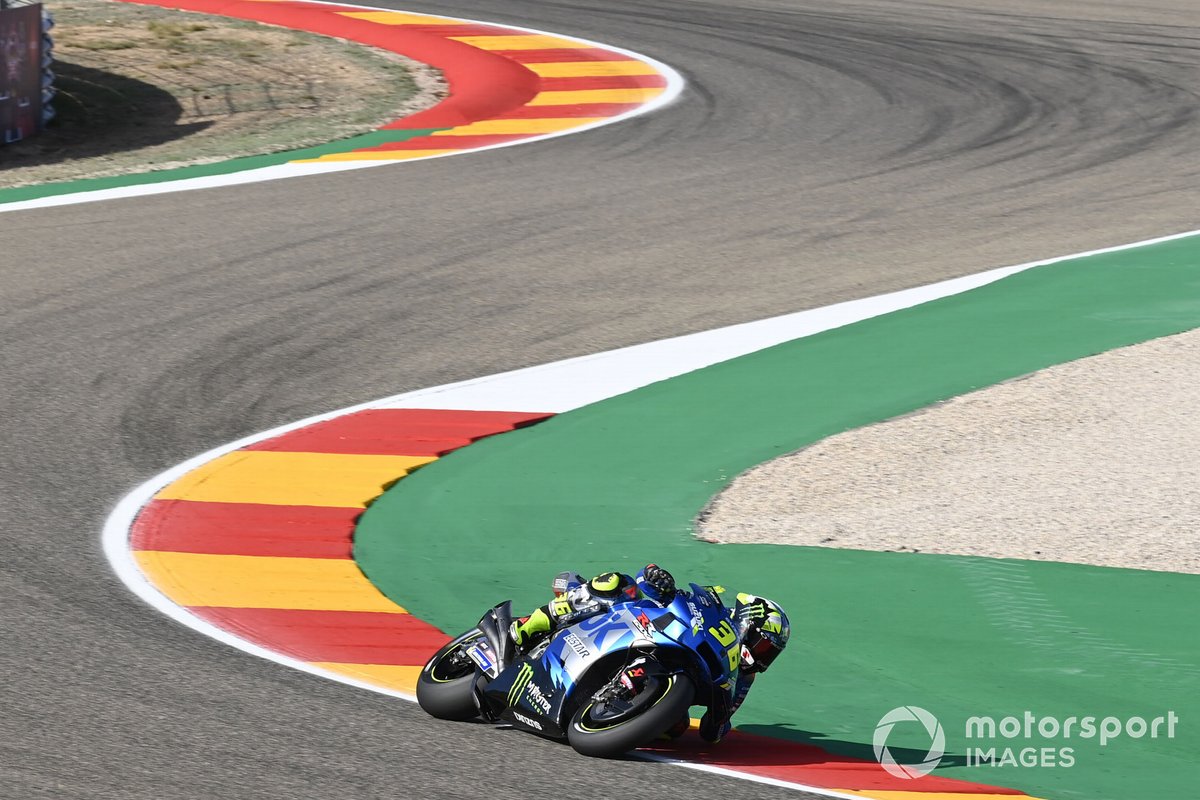 Ducati’s Francesco Bagnaia completed the top three with a 1m49.193s, while Alex Marquez lifted himself up to fourth on his LCR Honda after a late effort on a fresh medium rear.

Johann Zarco was seventh on the Pramac Ducati from Quartararo, Nakagami and the sister works team Honda of Silverstone poleman Pol Espargaro.

Yamaha test rider Cal Crutchlow continues to deputise for the ousted Vinales and was 12th at the end of FP1, while 2020 Aragon GP winner Alex Rins was a low-key 14th on the Suzuki.

Tech3 KTM’s Iker Lecuona was an early faller at the penultimate corner, while Petronas SRT’s Valentino Rossi crashed at Turn 5 later on.

They ended FP1 16th and 20th respectively, while factory KTM duo Miguel Oliveira and Brad Binder were 18th and 21st as both appeared to trial a new chassis this morning.

Jake Dixon has been handed a second MotoGP outing with SRT, standing in for the injured Franco Morbidelli, and completed the 22-rider field.