Aprilia has named three riders for its 2021 MotoGP line-up, but will only decide which of Lorenzo Savadori and Bradley Smith will partner Aleix Espargaro once winter testing is concluded

Aprilia has named three riders for its 2021 MotoGP line-up, but only Aleix Espargaro remains confirmed while one of Lorenzo Savadori and Bradley Smith will be his team-mate.

Aprilia has been forced into finding a replacement for Andrea Iannone for 2021 when the one-time MotoGP race winner had his doping ban upped to four years earlier this month.

Favourite options in Andrea Dovizioso and Cal Crutchlow never came to fruition, with the former opting for a sabbatical in 2021 while Crutchlow will join Yamaha as its official test rider.

Aprilia courted Moto2 frontrunner Marco Bezzecchi for next year, but the VR46 team he races for in Moto2 blocked this move.

The marque has confirmed three young riders were offered the opportunity to step up to MotoGP - the other two thought to be Joe Roberts and Fabio Di Giannantonio - but claims they didn't feel ready to make the jump.

Earlier on Monday the official provisional entry list for the 2021 season revealed Savadori as a race rider alongside the already confirmed Espargaro.

Savadori replaced fellow test rider Smith on the RS-GP for the final three rounds of the season, although insisted the latter was still part of the team.

Aprilia has now confirmed both Savadori and Smith will stay on next year, but is holding off making a decision on which of them will race and which will continue as the test rider for the time being. 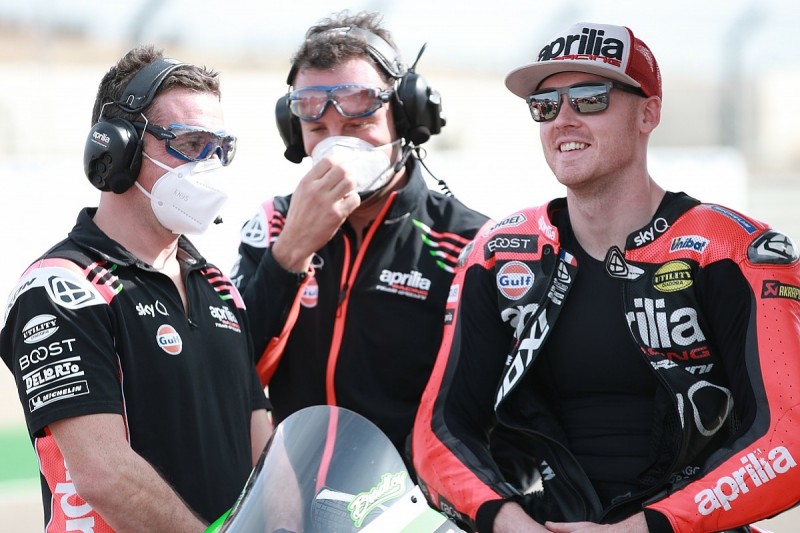 "It's no secret that we offered three young riders an opportunity because we felt that our project could be very interesting for talented young riders," CEO Massimo Rivola said.

"But they did not yet feel ready for the leap and, at the same time, the teams that have already signed them for the 2021 season preferred to keep them.

"We respectfully acknowledge their decision. We prefer to continue with our riders, rather than choosing solutions that are still open but about which we are not entirely convinced.

"Even in the difficult conditions of this season, particularly penalising for a fledgling project, the bike improved greatly and significantly reduced the gaps both in the races and in practice on basically all the circuits.

"Aleix finished on a high note and, even in the [Portuguese GP] race yesterday, was lapping with the same times as the leaders.

"Lorenzo has also shown significant progress in just three races and we know that we can count on Bradley's professionalism and experience.

"Aleix will obviously be our top rider. The roles of second rider and test rider will be decided at the end of the winter test schedule."

Last month three-time MotoGP champion Jorge Lorenzo confirmed he had an option with Aprilia to be its test rider in 2021, but this link has gone quiet recently.

How Yamaha's MotoGP engine woes haunted it in Portugal