MotoGP returns to Portugal for its penultimate round of the 2021 season, having had to add a second race at the Algarve due to COVID-19 forcing the cancellation of the Pacific flyaway rounds.

The pace at the Algarve track was immediately hot, with the best FP1 time from April’s Portuguese Grand Prix already surmounted after eight minutes of running.

Suzuki’s Alex Rins – who fought for the victory that ultimately went to Quartararo when MotoGP last visited Portugal  – was the first to better that previous FP1 best with a 1m41.997s, before Ducati’s Francesco Bagnaia shot to the top of the order with a 1m41.980s.

Bagnaia comes into the penultimate round chasing runner-up spot in the standings, while also hoping to strengthen Ducati’s hopes of retaining the constructors’ crown.

Seconds later Quartararo spread the field with a 1m41.481s, though Bagnaia would get back on terms soon after with a 1m41.426s – bettering this to a 1m40.796s with just under half an hour of the session still remaining.

Around four minutes later, Quartararo guided his Yamaha back to the top of the order with a 1m40.768s, which would stand as the reference until the final 13 minutes.

Mirroring how much of the second half of 2021 has gone, it was Bagnaia who again challenged Quartararo’s lap with a 1m40.421s.

Bagnaia looked set to end the session fastest, but Quartararo snatched top spot on his final lap with a 1m40.192s to edge out the Ducati rider by 0.045s. 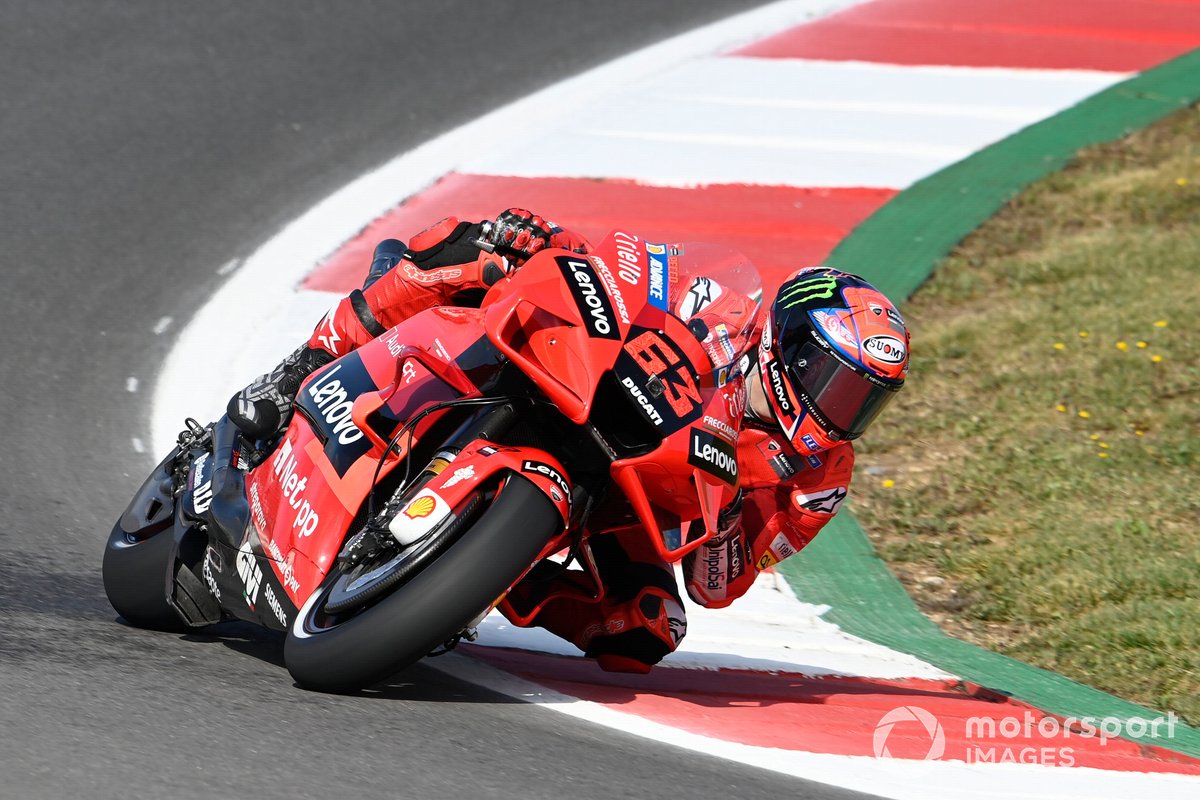 Jack Miller hopped up to third late on to round out the top three on his Ducati, with Rins – who debuted a new shoulder camera from Dorna Sports in FP1 – heading Suzuki team-mate Joan Mir.

Outgoing world champion Mir was lucky to stay on his Suzuki around halfway through FP1 when he had a huge moment exiting Turn 13.

Luca Marini made an impressive start to proceedings in sixth on his two-year-old Avintia Ducati, with Pol Espargaro fastest of the factory Hondas in seventh as team-mate Marc Marquez watches this weekend from the sidelines after suffering a concussion in a training incident.

Maverick Vinales – who said on Thursday he was intrigued to return to Portugal to be able to compare the Aprilia he currently rides with the Yamaha he started the season on – was eighth in FP1, 0.661s off the pace, with his replacement in the Yamaha factory team Franco Morbidelli and the sister Aprilia of Aleix Espargaro rounding out the top 10.

The next-best Hondas were Alex Marquez and Takaaki Nakagami of LCR in 11th and 12th, with the top KTM Iker Lecuona in 14th on his Tech3-run RC16.

Pramac’s Jorge Martin, who admitted on Thursday that MotoGP’s return to Portimao initially “scared” him having suffered a violent crash here back in April, was 17th.

Home hero Miguel Oliveira made a low-key start on his factory KTM down in 18th ahead of Petronas SRT’s Andrea Dovizioso.

Bagnaia would “really like to fight” Quartararo in final MotoGP rounds