Marc Marquez says an alarm made his Honda MotoGP bike “crazy” on the grid and led to his disastrous start at the Americas Grand Prix, which plunged him to last.

The six-time MotoGP world champion was making his return to action following his double vision-induced Argentina absence at the Circuit of the Americas and was pegged by many of his rivals as a favourite to take victory in Sunday’s race even from ninth on the grid.

But a technical issue meant he barely pulled away at the start and was dropped to last by the first corner, by which point his Honda sprung into life.

Marquez admits he thought he’d engaged his pit limiter and says the bike still had a problem during the race, but it was good enough for him to charge through to sixth.

“We had a technical problem, but Honda is investigating what’s going on,” Marquez said on Sunday at COTA.

“They know already more or less, but they are investigating.

“Since I arrived on the start, I saw some alarms [on the dashboard] and then I tried to start, to not lose a lot, but the bike was crazy.

“Even I checked if I put on the pit limiter. But no.

“This alarm kept on all the race, but lucky for us at the first corner when the holeshot was disengaged, the bike works more or less in a good way – not perfect, because there was something there that was still wrong.” 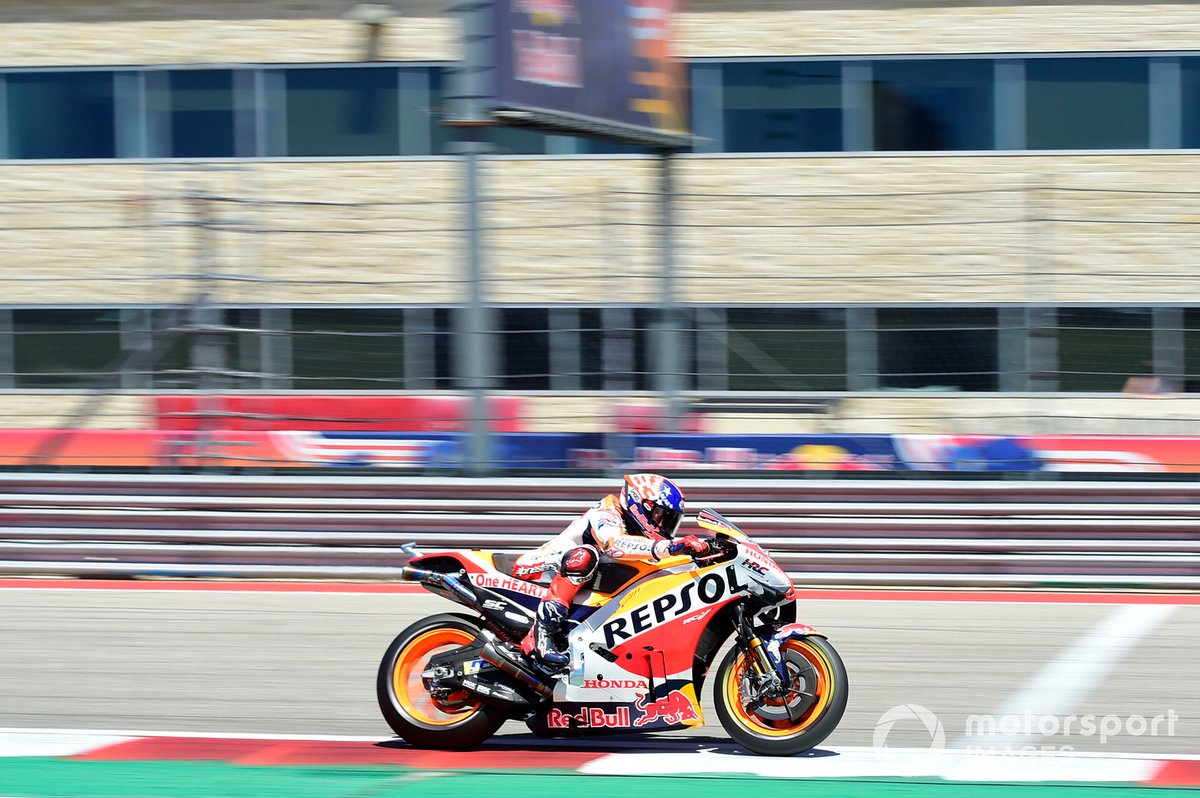 The Spaniard added that his grand prix became “a sprint race” from that moment, but his body stopped him from going any higher than sixth.

“I gave everything, and when five, six laps remained my body said ‘Ok, that’s it’ and then I just tried to finish the race and even like this I managed to finish in a good pace,” he said.

“The result is not what we expected, but if we check how we started, how the first corner was and how we finished, we can say we built and we got a lot of confidence from this weekend.

“My target was to build confidence, try to don’t have any crash all weekend because the doctor said to me everything was fixed but I am scared about my health, was a recent impact three weeks ago.

“So, just I ride in a good way and this was the most important thing.”

Despite being denied a chance to fight for an eighth COTA victory, Marquez says he is still “satisfied” with the race – but more so the fact that he was able to come back in Texas following his vision problems after his violent Indonesia crash.

“Being here already this weekend was satisfaction and finishing the race in sixth position is also satisfaction,” he stated.

“If we check how we started the race, it’s true that looks like when you are in the worst moment everything arrives.

“But this is something that happens and I keep going, keep pushing.

“I want to say thanks to the team because they helped me a lot, they believed in me, they give me the confidence I need and this is the most important thing.”

Quartararo: Yamaha “not ready to fight for podium” on MotoGP tracks like COTA