Suzuki's Joan Mir says he was "surprised" at how Yamaha's Maverick Vinales rejoined the track after an off during MotoGP French Grand Prix FP2.

Vinales outbraked himself into the Garage Vert double right-hander during Friday's drying second MotoGP outing at Le Mans and was forced to run through the gravel owing to the wet painted runoff area.

The Yamaha rider rejoined the circuit on the exit of the corner, which forced the following Mir to lift off on the straight between Garage Vert and the Chemin aux Boeuf section at Turn 9.

Mir was visibly angry at this, with both exchanging gestures again about the incident after the chequered flag.

The Suzuki rider says he was "not super angry" at Vinales, but feels they could have been involved in a "dangerous moment" had Mir been further up the straight when the Yamaha pulled back onto the circuit.

"I was not super angry, I was really surprised to see one bike coming across the straight like this and I didn't see any movement from Maverick's head, just [him] looking to the track," Mir, who was ninth overall, said of the incident.

"The good thing is I closed the throttle, but [if I was] 50 metres in front, probably we would have had a dangerous moment - but [it would have been] a lot worse for him because I was the one with the speed, but he was the one in the worst path, so was probably even more dangerous for him.

"But it's important everyone understands this can't happen, but I don't want to blame Vinales, but it's something to consider that we can't do this because this layout is really dangerous because it's in the middle of the straight." 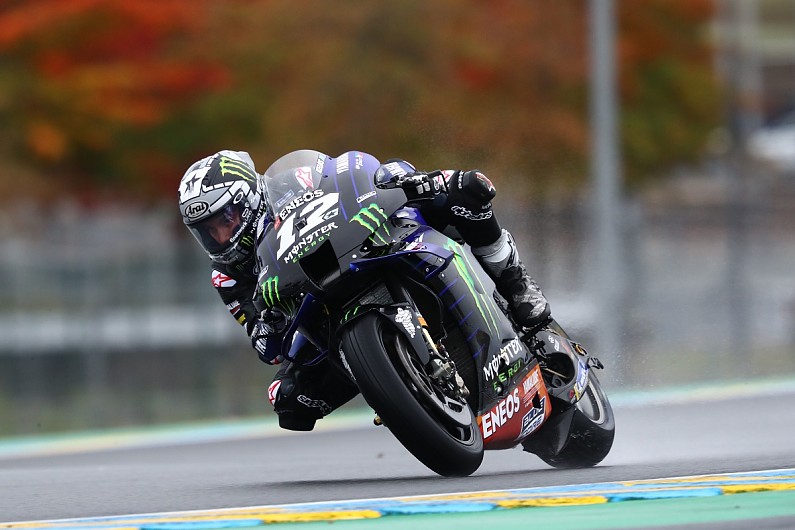 For his part, Vinales felt he wasn't "too aggressive" when he rejoined the circuit and notes had he tried to turn earlier on the wet grass he could have crashed into the path of Mir.

"I saw him before the [corner] entry," second-placed Vinales said.

"I don't know if it was enough room on the track [for him] to pass, but I didn't think it was too aggressive and for sure not intentional because I entered on the grass and I didn't want to put any banking because it's very dangerous.

"Imagine if I crash, the bike goes into the middle [of the track] when he passed.