LCR's Cal Crutchlow admits his right arm is still "not in a great situation" ahead of the MotoGP French Grand Prix, a month after arm pump surgery.

After sustaining the injury in a free practice crash at the season-opening Spanish GP, Crutchlow underwent an operation following August's Styrian Grand Prix and was forced to miss the two Misano rounds owing to complications.

Continuing to battle swelling, Crutchlow did race to 10th in the Catalan GP but said at Le Mans on Thursday that the problems haven't improved in the days since, which forced him out of the midweek test at the Algarve circuit.

"Just another week in the life of, if it was easy everyone would be doing it.

"My arm's not in a great situation at the moment, honestly speaking. It's one of the reasons why I didn't ride at Portimao [in Wednesday's test], I didn't want to use the arm.

"I will ride this weekend and then I will go and see Dr Mir again and consult with him as to what the best option is to do because the arm still has some fluid, the arm is very swollen, the flexor muscle is very, very hard for some reason.

"And the skin is completely stuck to the muscle and the tendons and we can't get it off.

"Whatever happens, you can't get it off. Physiotherapy, massage, you can do whatever you want but it's like super glue.

"It's not a great situation." 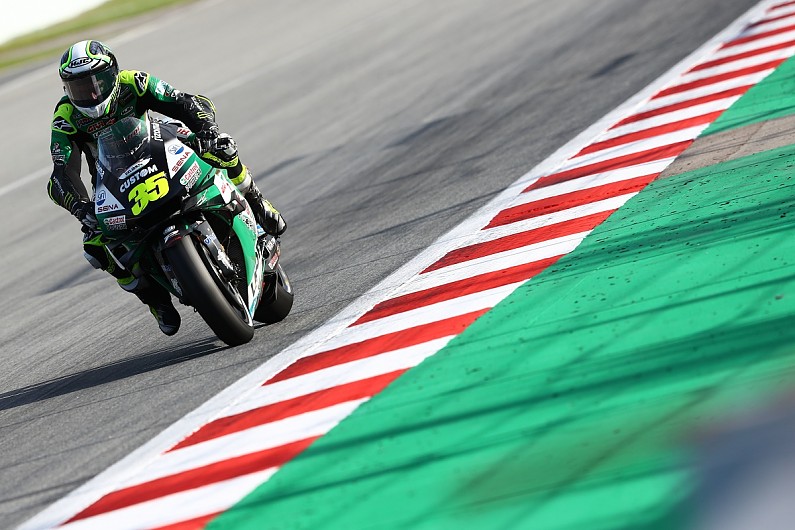 Crutchlow isn't concerned about his arm "long-term", but is wary of managing it over the intensive run of six races in the next seven weeks as the MotoGP season comes to a close.

He is unsure if he will have to miss any further rounds as a result.

"I don't know if I'll have to sit any out, but I believe that most people wouldn't ride or be able to ride," he added.

"But that's not something to be proud of, to be honest.

"I wish I wasn't in this situation, of course.

"But, I'll continue to do my job, I love my job, I still want to be out there. That's the reason I am.

"The good thing is there's no real safety concern for anybody else on track, it's more of a concern for me with my arm.

"It's not going to heal over these next weeks, there's no doubt about that.

"I'm not concerned for the arm long-term. I think the arm will settle down once I get to the bottom of the problem and once I can have that fixed.

"Problem is, we don't really know what it is at the moment, but I believe if I continue to race next year and if I have the winter off the arm will be fine next year.

"That's not a concern at all. The concern is these six races in a row, it's going to be difficult."