Fabio Quartararo says his victory in the MotoGP Catalan Grand Prix was not motivated by Marc Marquez's recent comments about the Petronas SRT rider's performances.

Honda released an interview with injured world champion Marquez last week, in which he claimed he expected "much more" from Quartararo following his double win at Jerez in July.

Following those races, Quartararo scored just 33 points out of a possible 100, with a best result of fourth in the Emilia Romagna GP - though this was a result of post-race penalty, as he had taken the chequered flag in third.

Quartararo bounced back on Sunday at Catalunya to score his third win of the season and take an eight-point lead in the championship.

The SRT rider insists Marquez's comments were not on his mind on Sunday, and actually agreed with them.

"I talked to Marc on Thursday when he was here," Quartararo responded when asked by Autosport if Marquez's comments motivated him.

"But, no, even if he don't say that comment I will give exactly the same [on the bike]. He's also true because I also expect from myself [to be] a bit better.

"So, I think he's right. So, nothing about this comment, but what is good is we are back on the podium and it feels good."

The two SRT riders ran close for a handful of laps, and Quartararo believes their pace was "too fast" at that point and worked the tyre too hard - leading to a dramatic drop-off in the latter stages.

Leading by 3.5s at one stage, Quartararo's tyre wear led to him to doing "lap times of Moto3 guys" and allowed second-placed Joan Mir on the Suzuki to close to within a second at the finish. 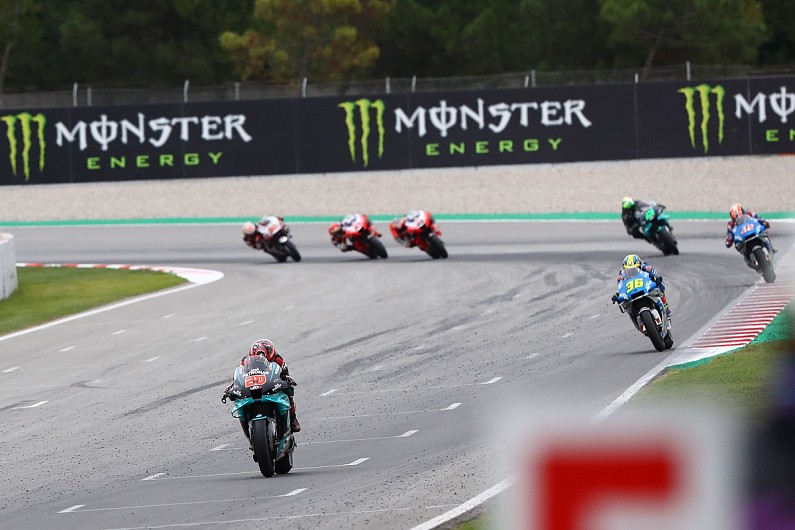 "Honestly, it was a difficult race," the Frenchman said.

"I made a great start, but I was fourth. Then Jack [Miller] made a mistake and I knew it was the perfect moment to overtake.

"And when I take the lead, Franco stayed five or six laps behind. Our pace was really fast and I think at this moment it was way too fast for keeping the tyres fresh for the end.

"At the end, I was three seconds slower, but not because I was in control.

"I was pushing my maximum and unfortunately it's difficult to understand because these two guys [Mir and Alex Rins] were much faster than me at the end.

"But I think it was so important to make the first part of the race in the best condition.

"We can be happy about our job today because after five races in a row where we had tough times, we learned many things."