The Petronas SRT rider dominated the opening two races of 2020 but failed to reach the podium in the subsequent five.

Franco Morbidelli held onto his pole position off the line ahead of the fast-starting Pramac Ducati of Jack Miller.

As the field bunched up through the first two turns, Danilo Petrucci had a moment accelerating from Turn 2 which forced Johann Zarco to check up to avoid the factory Ducati ahead.

But Zarco tucked the front end of his Avintia GP19 and slid into the side of Dovizioso on the sister works Ducati, taking both out of the race.

At the front, Valentino Rossi found his way through on Miller at Turn 5 and set about chasing down his protégé Morbidelli in the lead.

Miller got out of shape on the way into Turn 10 and almost wiped out Rossi, with Quartararo capitalising to move through into third.

Morbidelli's lead over Rossi stood at half a second in the early stages, with the Yamaha trio able to drop Miller pretty quickly.

Quartararo moved ahead of Rossi into the first corner at the start of the sixth lap, and three tours later would take the lead away from his Petronas SRT team-mate at the same place.

Morbidelli ran Quartararo close, but his hopes of victory faded when he almost crashed twice on the way into Turn 1 on lap 14 and dropped behind Rossi into third.

Rossi's gap to Quartararo stood at six tenths, but hopes of a 200th MotoGP podium on his 350th premier class start were dashed when he slide off at Turn 2.

Morbidelli was promoted to second again, but his rear faded dramatically in the latter stages, with both Suzukis finding their way through to push him off the podium.

Joan Mir recovered from a steady start to get into second ahead of Morbidelli after passing the SRT rider at Turn 1 on the penultimate lap.

The Suzuki rider was able to carve into Quartararo's lead - which stood at over three seconds at one stage - and was just under a second back at the chequered flag. 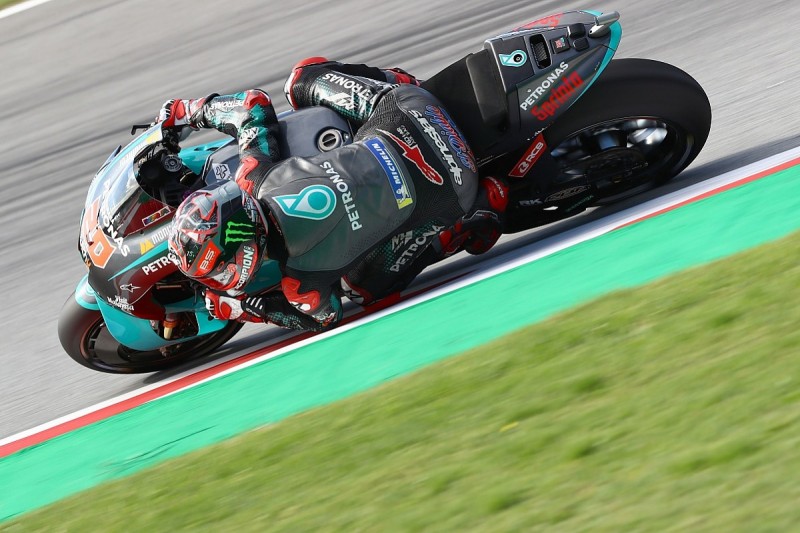 Rins came through from 13th on the grid to demote Morbidelli at Turn 10 on the same lap that Mir passed the Italian, and followed his Suzuki team-mate home for his first podium of the season and the first double rostrum for Suzuki since Misano 2007.

Morbidelli held onto fourth by only 0.545 seconds ahead of the Pramac duo of Miller and Francesco Bagnaia, with Takaaki Nakagami close behind in seventh on the LCR Honda.

Petrucci was eighth on his works team Ducati, while Maverick Vinales salvaged a lowly ninth on his Yamaha after a miserable afternoon.

Vinales got a poor launch from fifth on the grid and found himself outside of the points in 16th at the end of the first lap. Struggling to overtake on the M1, he benefitted greatly from those who crashed ahead.

The Yamaha rider bested LCR's Cal Crutchlow to push him back to 10th place in the closing stages, with the points rounded out by KTM's Brad Binder, Aprilia's Aleix Espargaro, the Honda of Alex Marquez, Iker Lecuona (Tech3) and Avintia's Tito Rabat.

Pol Espargaro on the KTM crashed out of the top six battle on lap 13 and was later joined on the sidelines by Tech3's Miguel Oliveira.

Quartararo's third win of 2020 moves him eight points clear in the championship now, with Mir moving up to second with his fourth podium of the year.