The Ducatis struggled in the low-grip and windy conditions on Friday and didn't do any running on soft rubber in FP2, which meant Danilo Petrucci went out on the compound at the start of FP3 and set the early pace with a 1m40.783s.

This was quickly beaten by Petronas SRT's Quartararo with a 1m40.476s, which he bettered to a 1m40.359s moments later.

Franco Morbidelli's 1m39.789s from FP2 still stood as the fastest lap on combined times for the first half of the third session, though team-mate Quartararo started to put this under threat with 15 minutes to go.

A brake issue for Quartararo at the end of FP2 stopped him from doing a time attack, but he made up for this with a 1m39.786s to go fastest overall.

Others joined Quartararo in switching to soft rubber as they placed their bids for an automatic Q2 place, with KTM's Pol Espargaro edging ahead of the SRT rider with a 1m39.756s.

Emilia Romagna GP race winner Vinales was the next rider to begin lighting up the timing screens, the Spaniard guiding his works Yamaha to a 1m39.687s with just over seven minutes to go.

Vinales found more time on his following tour to improve to a 1m39.462s to go just under two tenths clear of the field.

As the chequered flag came out, Vinales looked set to hold onto top spot - but Quartararo had other ideas, finding a sliver of time on his final effort to produce a 1m39.418s to head into qualifying this afternoon as the rider to beat. 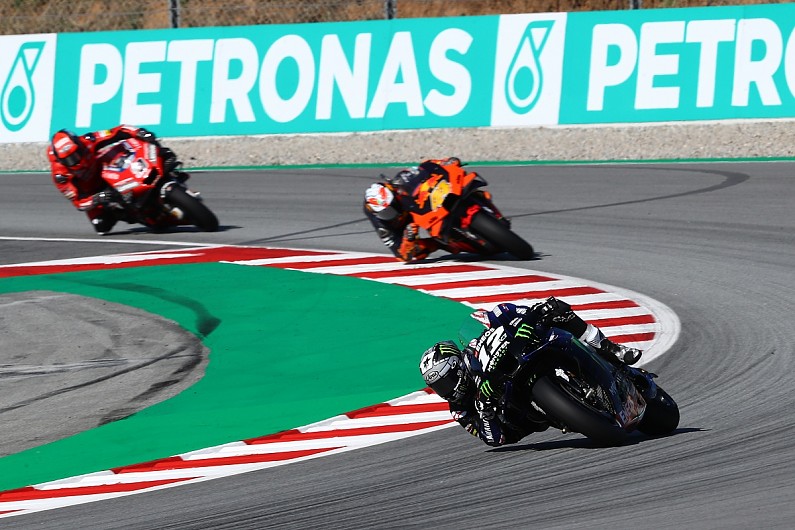 Tech3 KTM's Miguel Oliveira leaped up to third late on ahead of Petrucci, whose final lap of 1m39.702s ensured he would be the only GP20-mounted Ducati rider in the top 10.

He creeped ahead of Avintia's Johann Zarco on the year-old Ducati, with Pol Espargaro heading Morbidelli and Valentino Rossi on the Yamahas.

Brad Binder bagged a direct place into Q2 on his KTM late on in ninth, with Suzuki's Joan Mir securing the final spot in 10th at the expense of Pramac pair Francesco Bagnaia, Jack Miller and the factory Ducati of Dovizioso.

Alex Rins also failed to make the Q2 cut in 14th on his Suzuki, with the LCR pair of Takaaki Nakagami and Cal Crutchlow also missing out after late crashes for both.

The conditions also caught out Aprilia's Aleix Espargaro in 17th and Tech3's Iker Lecuona in 21st, who registered his third crash of the weekend.

Such are the fine margins in MotoGP in 2020, the top 20 from Quartararo down to Avintia's Tito Rabat were covered by just 0.923s.