Pol Espargaro believes his crash in the opening stages of MotoGP San Marino Grand Prix Q2 was a direct result of having to use up tyres getting out of Q1.

The KTM rider crashed towards the end of FP3 at Misano on Saturday morning, which left him outside of the automatic Q2 spots.

Though he eased through the first part of qualifying, he was forced to go into the pole shootout session with no new front tyres available to him and crashed at the Turn 15 left-hander early in Q2 as a result.

He was able to get back out on track on his second bike, but was only able to go 11th quickest with a 1m32.266s having qualified on the front row for the 2019 San Marino GP.

Commenting on his day, Espargaro said: "It happened the same thing that happens when you need to go to Q1, and then you have no more tyres for Q2.

"So, this is the problem. When you go through Q1, you don't have enough tyres, and then I entered into Q2 with a used front - with nine laps [on it] and a new rear in this place where rear grip is quite a lot, and then I was heading for the same lap time [as Q1] to be on the second row.

"But I lost the front because the front was too used and the rear completely new.

"So, our problems start in FP3 when I did a mistake and we didn't get into Q2."

Espargaro revealed personal problems away from the track have caused him to struggle "to be focused" on the bike this weekend, and feels he could have "easily" been on the second row had he not made that mistake in Q2.

"I've struggled to be focused this weekend," he admitted.

"But we will start 11th tomorrow." 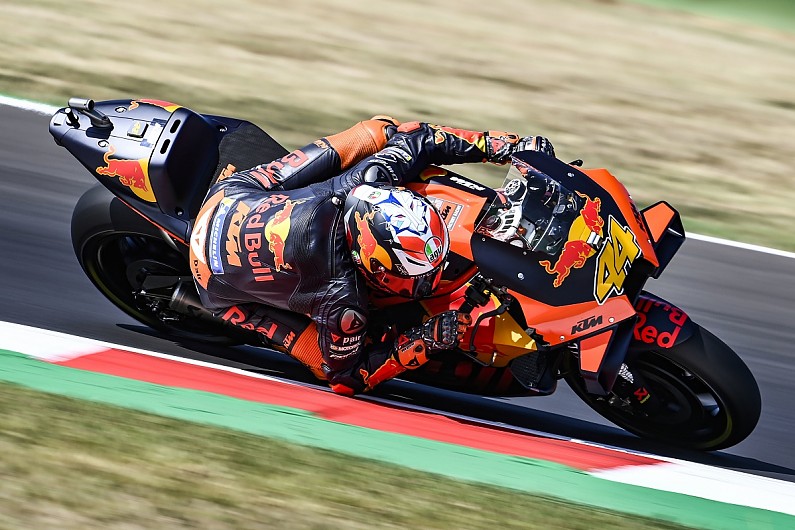