Vinales set the early pace at 1m32.130s, though this was quickly beaten by his factory Yamaha team-mate Valentino Rossi.

The FP3 pacesetter held provisional pole for all of 30 seconds, as Quartararo concluded the opening run of Q2 fastest of all with a 1m31.791s.

While the track was quiet, Vinales headed out for his second run and returned to top spot with a 1m31.787s with just under five minutes remaining.

As the rest headed back out, Vinales returned to pitlane for his second bike for a final run, while Morbidelli began setting the timing screens alight.

This was short-lived, however, as Vinales guided his works team M1 to a 1m31.411s to claim his second pole of the season and back-to-back Saturday successes at Misano - the Spaniard setting off the air bag in his leathers during his animated celebrations.

Morbidelli held onto second to claim his best qualifying result of the year, with SRT team-mate Quartararo completing the front row. 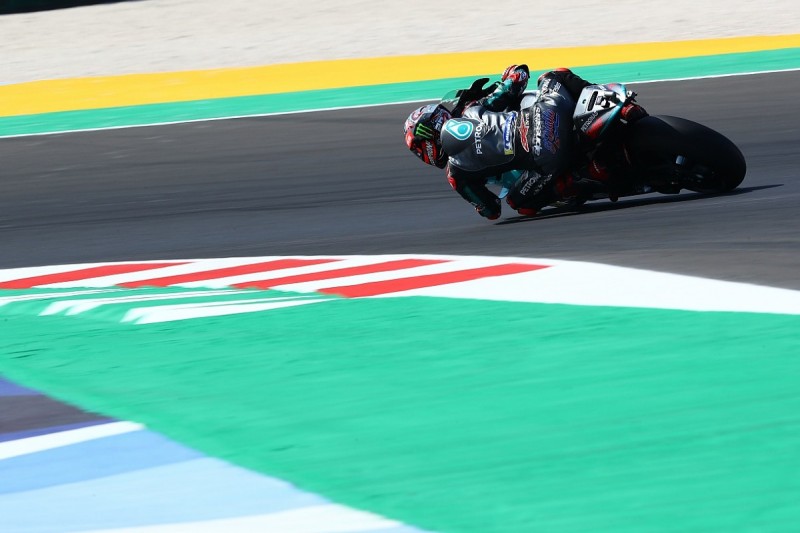 Rossi heads the second row, missing the top three by just 0.086s, with Pramac pair Jack Miller and Francesco Bagnaia split by just 0.002s to round out the top six.

Alex Rins was top Suzuki runner in seventh ahead of team-mate Joan Mir, who ran off track late on at the Rio corner of Turn 4, with Andrea Dovizioso ninth on the Ducati.

Johann Zarco completed the top 10 on the Avintia GP19, with Q1 graduate Pol Espargaro only 11th after an early crash at Turn 15. Miguel Oliveira (Tech3), who also came through Q1, was 12th.

After crashing late in FP3, Espargaro eased through Q1, while it was his Aprilia-mounted brother Aleix Espargaro trailing him for much of the session with a 1m32.295s.

The Aprilia rider, however, was unable to better that early effort and was unable to depose Oliveira when he leaped up the order in the closing stages.

He will start 13th having missed out on a place in Q2 by 0.083s, with Takaaki Nakagami top Honda runner in 14th on his year-old LCR bike amidst a miserable weekend for HRC following the withdrawal of his team-mate Cal Crutchlow through injury.

Danilo Petrucci was unable to get his factory Ducati through and will start 15th ahead of KTM's Brad Binder and Avintia's Tito Rabat.

The grid will be completed by a disappointed Iker Lecuona (Tech3), Honda's Stefan Bradl, Bradley Smith (Aprilia) and the sister factory team Honda of Alex Marquez.