A number of MotoGP riders have been critical of the "really bad" bumps found on Misano's new asphalt after Friday's practice for the San Marino Grand Prix.

After the field experienced grip issues at Misano last year, the circuit had new asphalt laid ahead of the 2020 event, which was first trialled by a handful of race and test riders at the end of June.

Several riders complained then of some vicious bumps through the fast Curvone Turn 11 right-hander and following two corners, with more highlighting issues on Friday.

Pramac's Jack Miller said that section of track was "really bad" and says whoever laid the new surface has "made it worse in terms of bumps".

"It's bumpy, it's bad, especially in the fastest sector it's really quite bad," Miller said.

"But the biggest bonus is at least there is some grip out there. We didn't have grip last year.

"But the fact that it's this bumpy, and I don't think it's even a year old, I don't know what the fuck they did, but they made it worse in terms of bumps. Zt least it's got some grip.

"It is bad, that back section the bike is just shaking and bouncing." 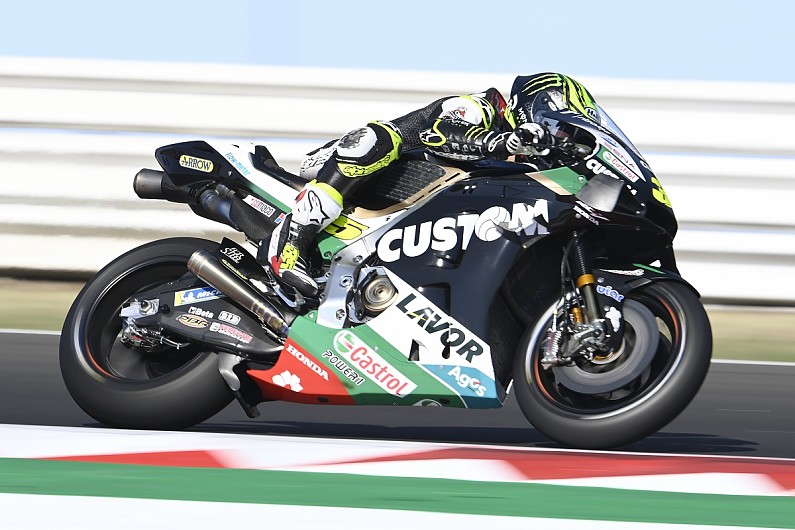 "The grip is a lot better, but the bumps are really harsh and especially out of Turn 3 and down the back straight.

"But down the back straight, you're doing 200mph, the thing's shaking like mad. It's not great in some areas."

His LCR team-mate Takaaki Nakagami admitted with the Honda the bumps are so bad he can't even do 10 laps in a row and is finding it hard to hold onto the bike.

"The bumps are incredible, and we struggle a lot because when you hit the bumps our bike is always shaking a lot and it's really difficult to hold onto the bike," Nakagami said.

"I'm not concentrating on the braking on the next corner [as a result].

"We took a lot of time to find the solution because now we don't really have a good balance of the bike. The problem is too big for us, so we need to find a solution as soon as possible, because like this I cannot finish the race.

"Even [after] 10 laps, I get arm pump and I cannot hold onto the bike. So, we need a solution as soon as possible."