Aleix Espargaro says his 12th place in the MotoGP Styrian Grand Prix was "100% the limit" of the Aprilia at the Red Bull Ring.

After a technical issue with his number one bike in qualifying left him in 20th on the grid, Espargaro worked his way up to 12th by the end of the restarted 12-lap Red Bull Ring race last Sunday.

Just 6.4 seconds off of race winner Miguel Oliveira, Espargaro says he was "satisfied" with his performance, but conceded it was "difficult to go faster".

"Regarding the performance, I'm satisfied," he said. "I think what we did in race two is 100% the limit that was available during this weekend.

"We finished six seconds from the leaders, so difficult to go faster.

"So, unfortunately, we start very bad on the grid, but then we have finished not far from Valentino [Rossi in ninth], in front of the two [Petronas SRT] Yamahas, in front of [Johann] Zarco as well.

"So it wasn't a disaster the second race." 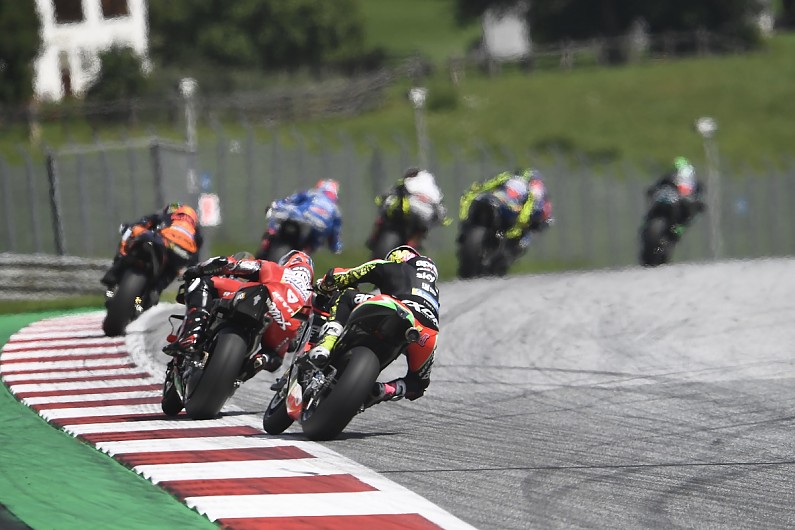 Espargaro insists Aprilia has "better speed than we have shown" with the 2020 RS-GP, but feels numerous problems are not allowing him to "show our potential" and thinks the Italian marque needs to "work with more quality" going forward.

"The feeling that I have, why I am not happy is that we have better speed than we have shown," he added.

"We have many small problems every weekend that don't allow us to show our potential.

"If you analyse the race carefully, the 12th position on paper is shit obviously, but if you analyse my pace I think I was faster than a couple of guys in front of me.

"Our pace was good enough to fight for top eight or top six, every lap in 1m24.5s.

"But starting from P20 due to the problem we had in qualifying... always we have a small problem.

"So, what we need is to try to use the maximum of what we have available and we are not using our bike at the maximum level.

"So, the first thing we need is to watch inside our garage and try to work with more quality.

"Obviously we need to improve the bike, but my feeling honestly is this bike is 10 times better than 2019 version. But we're not showing to the world with the results."