Avintia Ducati's Johann Zarco will miss Friday's opening two practice sessions for MotoGP's Styrian Grand Prix having not met the requirements to undergo the mandatory medical test before the weekend.

Zarco was involved in a 200mph crash with the Petronas Yamaha of Franco Morbidelli at Turn 3 of the Red Bull Ring last week, with his Ducati hitting the barrier and vaulting over the track.

Morbidelli's bike meanwhile slid back onto the track and nearly avoided the factory Yamahas of Valentino Rossi and Maverick Vinales.

Although it was initially understood that all riders escaped serious injury during a nasty crash at Turn 3 at the Red Bull Ring last weekend, it subsequently emerged that Zarco fractured the scaphoid in his right wrist.

The French rider had his wrist operated on Wednesday in Italy and travelled back to Spielberg on Thursday for the second of the two MotoGP races in Austria.

"It's a classic procedure, with the placement of a screw to fix the broken bone," Zarco told L'Equipe prior to the operation. 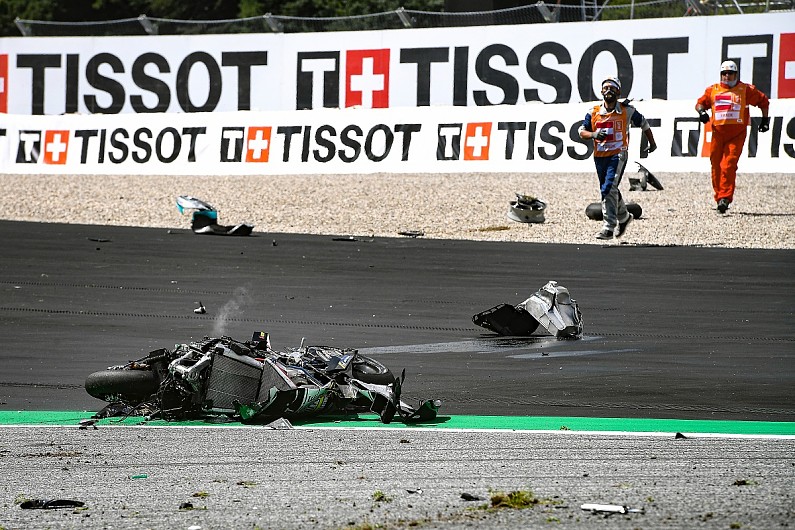 However, according to the MotoGP regulations, a rider cannot request a health check-up until at least 48 hours after an operation, meaning he is yet to be declared fit to ride in the Styrian Grand Prix.

Zarco can request another review on Friday after completing the mandatory 48-hour time period since his operation, and if deemed fit he would be allowed to take part in Styrian GP, starting with the third practice on Saturday.

However, as of now, the Avintia rider will miss both FP1 and FP2 scheduled for Friday.

Zarco is also due to attend a meeting with the stewards to explain his side of the crash, following criticism from certain corners that he took an unusual line under braking.

Morbidelli branded Zarco "half a killer" on Sunday and said what the Avintia rider did showed "little love" for both riders.

MotoGP announced on Thursday that it has made changes to the Red Bull Ring in the wake of the horror crash, with the air fence on the outside of Turn 3 extended to avoid a repeat of last weekend's crash.