After almost four months of delays, MotoGP race action returns with the Spanish Grand Prix. Here's how and when you can watch the race.

Following a tricky start to his race weekend, Fabio Quartararo stormed to the first pole position of the season by setting a new lap record at Jerez to beat Maverick Vinales.

Rins endured a nightmare end to qualifying as he crashed at Turn 11, moments after Pramac Ducati's Jack Miller also went down at the same corner.

Suzuki rider Rins suffered a fracture and dislocation to his right shoulder, which has ruled him out of the belated 2020 MotoGP season opener. A final decision will be made on Rins' fitness on the morning of the race.

Francesco Bagnaia (below) enjoyed a strong qualifying showing with fourth place - his best-ever MotoGP qualifying result - and he will start one spot ahead of Pramac team-mate Miller, with Cal Crutchlow rounding out the second row on the LCR Honda.

Jerez hosts a behind closed doors double-header to kickstart the 2020 MotoGP campaign, with Moto2, Moto3 and MotoE also in action, with the first event this weekend followed by the Grand Prix of Andalucia on 24-26 July. 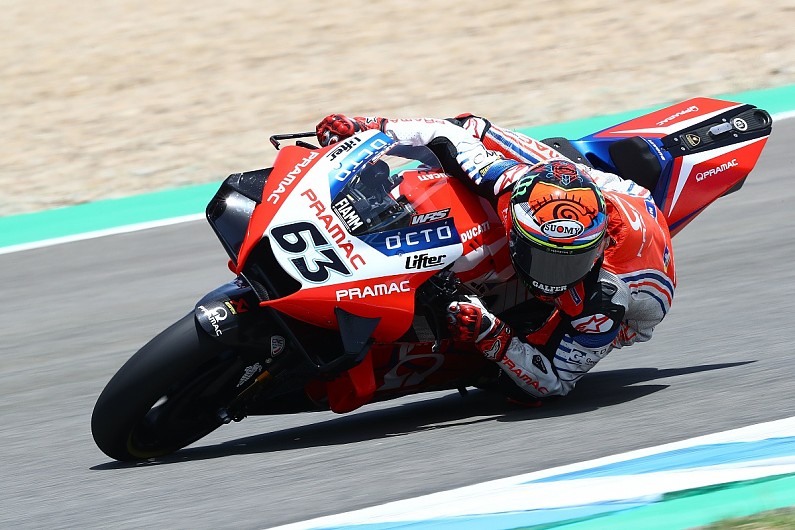 In the United Kingdom, BT Sport have exclusive live broadcasting rights, with Quest TV set to show highlights. The race will be shown live on BT Sport 2, with coverage starting at 12:30pm BST, directly after the Moto2 race. BT Sport will also be showing the MotoE, Moto3 and Moto2 races from Jerez before the Spanish MotoGP.

Current weather forecasts predict hot and sunny conditions at Jerez on race day, with a high of 34 degrees Celsius for the start of the MotoGP race.