FP1 pacesetter Marc Marquez set the initial benchmark on the factory Honda at 1m39.063s on a track surface some 16 degrees Celsius hotter than it was this morning.

Petronas SRT rider Quartararo was forced to miss the opening 20 minutes of first practice as punishment for running an illegal production bike in a training session at Paul Ricard last month.

Ending FP1 17th, Quartararo cut a frustrated figure at the end of the session, and in FP2 was immediately on the pace.

Quartararo immediately went half a second quicker with a 1m38.585s, which he improved to a 1m38.152s on the following tour.

Though Marquez cut his deficit to the Frenchman to 0.217s in the early part of the session, Quartararo's lap would go unchallenged until the closing moments.

Marquez's session was briefly interrupted by a slow-speed tumble at the tight Turn 2 right-hander just over 20 minutes into the session. 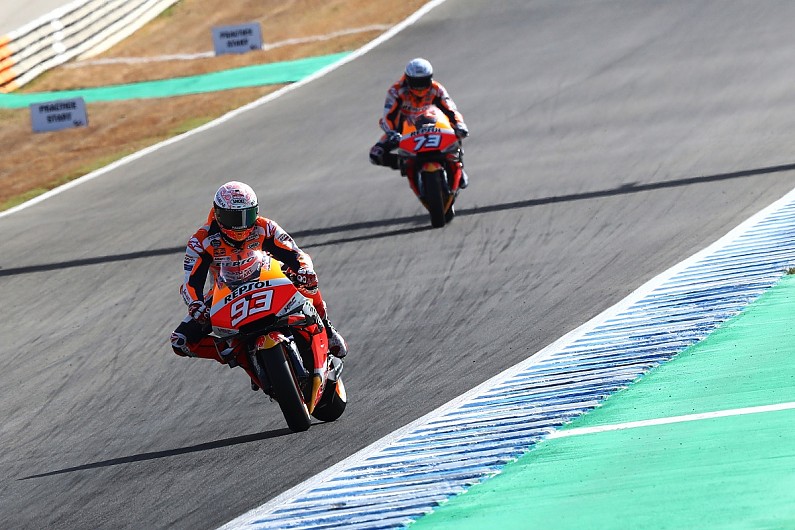 This came about 10 minutes after his rookie brother and factory Honda team-mate Alex Marquez lost the front of his RC213V through the fast Turn 8 left.

Several riders fitted fresh soft rubber for a late time attack, with Morbidelli using this to maximum effect to edge ahead of his team-mate with a 1m38.125s.

The SRT duo ended the session 0.027 seconds apart, with rookie Brad Binder an impressive third on the KTM after his late soft tyre charge.

Marc Marquez was shuffled back to fourth at the chequered flag, but remains fastest of all on combined times.

Pol Espargaro completed the top five on the second works team KTM ahead of LCR's Cal Crutchlow and the works Yamaha of Maverick Vinales.

The Ducati charge was led by Avintia's Johann Zarco on the year-old GP19 after a later run on fresh tyres, with Andrea Dovizioso and Pramac's Francesco Bagnaia rounding out the top 10.

The Suzuki duo of Alex Rins and Joan Mir were a low-key 14th and 16th, but spent the entire session focusing on race pace, with the Aprilia of Aleix Espargaro sandwiched between them.

Valentino Rossi was just over a second off the pace in 20th. Though the Italian was likely working towards Sunday on his Yamaha, Rossi did struggle on Wednesday in the hotter conditions during the test.

Alex Marquez remounted after his earlier fast tumble to end the afternoon 21st ahead of Aprilia stand-in Bradley Smith.