On this day in 2013, Valentino Rossi clambered onto the top step of the Assen podium to celebrate his first win in over two years. Truly banishing the demons of his Ducati nadir, it would be the catalyst for much more in the ensuing years

Following four fallow years with a new frontman in Blaze Bailey and two tepidly received records which contributed to a downturn in fortunes, Iron Maiden were at a crossroads. At a time when major bands were reforming classic line-ups to embark on globetrotting legacy tours (KISS and Black Sabbath being the main offenders), Iron Maiden were in real danger of simply going through the motions when it brought talismanic frontman Bruce Dickinson and guitarist Adrian Smith back.

After a brief reunion tour in 1999, the band launched a follow-up to '98's 'Virtual XI' in 2000 - the aptly titled 'Brave New Worlds'. Rebooting their stalled career, the reformation of its classic line-up proved to have been done with the bit between its teeth, rather than tail between its legs.

In many ways, it mirrors Valentino Rossi's return to Yamaha in 2013 following two miserable campaigns as a factory Ducati rider.

The seven-time premier class champion departed for Ducati and a considerably larger pay cheque as tensions at Yamaha between himself and Jorge Lorenzo had reached its boiling point across the 2009 and '10 seasons.

In 2011 Rossi was stepping away from the grid's friendliest bike - and the machine which had won the previous three world titles in his and Lorenzo's hands - for the unconventional and difficult Desmosedici. Managing just one podium finish all year, it marked Rossi's first winless campaign in grand prix racing.

Ducati changed its chassis from the carbon fibre design to the more conventional twin-spar aluminium design widely used by other manufacturers, and expected to make a step forward in 2012. But the GP12 proved just as difficult, and two podiums was all he could manage on his way to sixth in the standings. 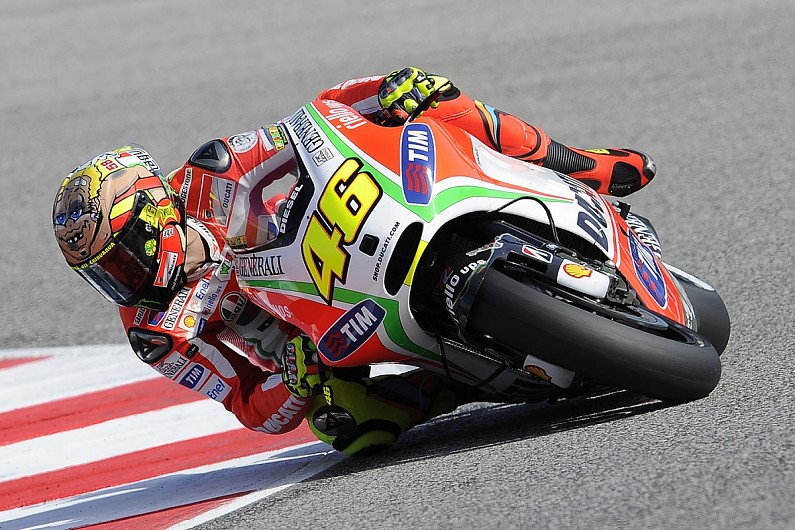 Keen to extract himself from Bologna for 2013, Rossi's options were limited, and initially Yamaha had no place for him. Retirement, at that point, crossed his mind.

"Unfortunately, with Ducati it was very difficult, especially at the beginning of 2012 we had a lot of expectation because 2011 was quite bad," Rossi said in a BT Sport interview last month.

"But in 2012 we had the new bike, so we hoped to be competitive. But unfortunately, also 2012 was very, very difficult. Sincerely, in that moment I think a lot of times about stopping, because especially at the beginning Yamaha said they didn't have a bike for me. So that moment was very tough for my career, because I thought if I don't have the chance to go back to Yamaha I also can stop, can finish my career."

However, a miserable season for Rossi's replacement Ben Spies opened the door for his sought-after Yamaha return.

Stepping back into a team now firmly moulded around old foe Lorenzo, Rossi faced the most crucial season of his career as the 2013 campaign dawned. Offering a glimpse of his potential now back on a race-winning bike, Rossi fended off Honda rookie Marc Marquez in Qatar to claim second (though ironically ended up getting a lift to parc ferme on the back of Andrea Iannone's Pramac Ducati).

But problems with the front end of his M1 in the early phases of races with a full fuel load ruled him out of podium contention over the next five races. By the Dutch TT, Rossi wasn't exactly vindicating Yamaha's decision.

After FP1 at Assen, the strongest Yamaha runners looked like Lorenzo and Tech3's Cal Crutchlow. But a monster crash for Lorenzo in a wet FP2, which broke his collarbone, presented Rossi with an opportunity. 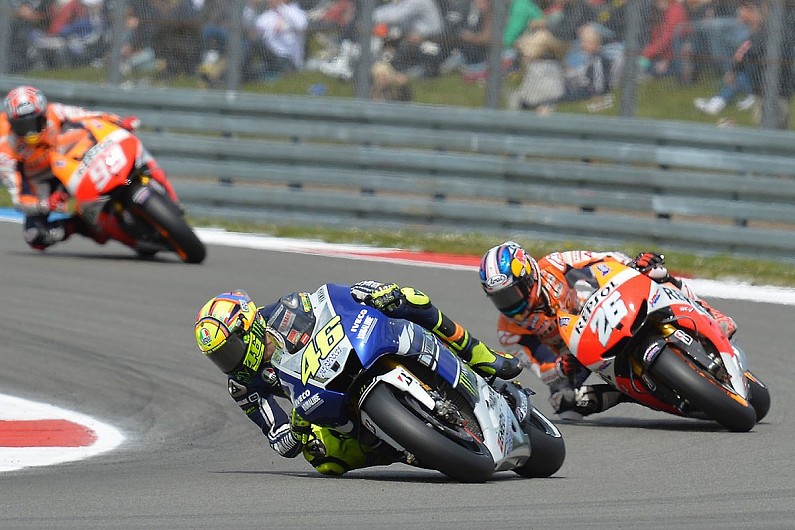 Putting his M1 fourth on the grid in a qualifying session topped by Crutchlow on the customer Yamaha for the first time, Rossi didn't make up any places off the line as Honda's Dani Pedrosa surged into the lead from fifth, trading places with polesitter Crutchlow who dropped back to fifth.

Rossi made his first move at the end of the opening lap to steal third from Stefan Bradl, as Pedrosa tried to break away. Rossi and Yamaha had made a breakthrough with bike set-up at the post-Catalunya test, the new-found confidence on the front end of his bike evident as he hauled in Marquez over the next few laps.

A mistake exiting the Geert Timmer chicane for the Honda rider gave Rossi a run into Turn 1, and he executed his pass for second cleanly. Lapping half a second quicker than Pedrosa on that same lap, it became a matter of when, not if, Rossi would take the lead.

Using the M1's supreme corner performance to deadly effect through the fast Ramshoek left-hander at Turn 15, Rossi dived down the inside of Pedrosa into the chicane on the sixth tour to move into the lead - much to the delight of the 90,000-strong Dutch crowd.

Pedrosa lapped more or less identically to Rossi over the next few laps in the 1m35s bracket, but the Spaniard would eventually drop into the clutches of his team-mate, with a brief scrap over second with eight laps to go giving Rossi room to breathe.

His advantage would eventually extend out to over two seconds as Marquez came under fire from the recovering Crutchlow, who struggled early on with a full tank and had it not been for that the British rider could have taken the fight to Rossi, potentially setting up a very different day.

But Rossi, riding as his old self once again, didn't put a foot wrong as he opened up his lead and would not be denied arguably the most important victory his career. 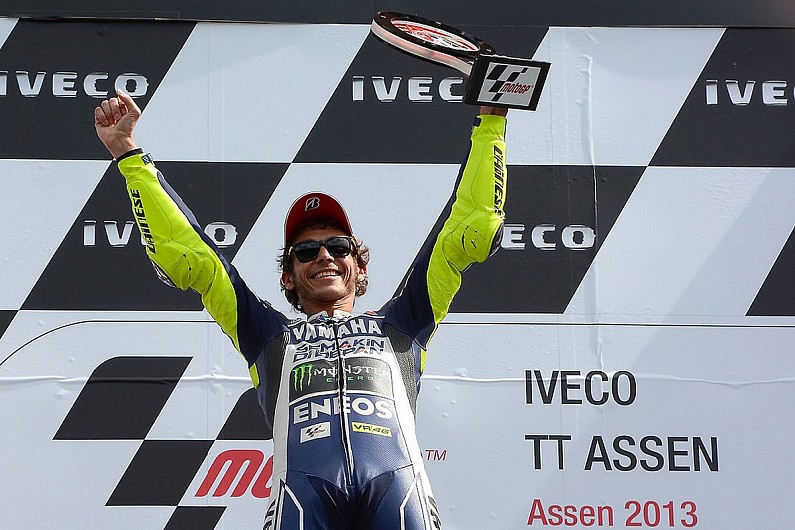 "It was very special, because it was a long, long time from the last victory, because the last victory was in Malaysia 2010, and after, at the end of that season, I moved to Ducati for the two years - 2011 and 2012," Rossi remembered in the same BT Sport interview.

"It was a very difficult [brace of] seasons, and [I didn't score] a victory. So, [to get the] victory in 2013 after more than two years was a great, great feeling to come back [to the top step of the podium] on the Yamaha, to come back on the P1 in Assen. It was one of the most important victories of my career."

Rossi's previous win at Malaysia in 2010 - symbolically, his 46th with Yamaha - came on the same day Lorenzo won his first title, somewhat stealing the Spaniard's spotlight. Had it not been for his win at Assen two and a half years later, all the headlines would have focused on Lorenzo's heroic return to finish in fifth place having had his broken collarbone operated on just 36 hours previously.

Rossi's Assen win in 2013 truly marked the moment he came in from the cold and proved that his time at Ducati hadn't broken him. And though it wouldn't be until Misano the following year that he would win again, Rossi proved a consistent podium visitor across the 2014 campaign to set up for his first proper championship battle since 2009 in '15. 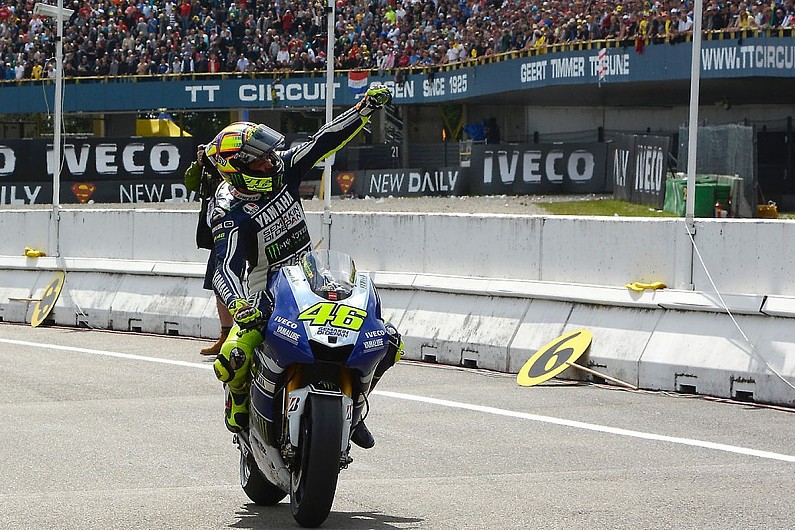