Maverick Vinales concluded MotoGP pre-season testing in Qatar fastest of all, while Honda appears to have hit a crisis point after Marc Marquez reverted to testing a 2019 bike.

Honda's troubles this pre-season have been well-documented, with both LCR's Cal Cructhlow and world champion Marquez - who is also riding below fitness - critical of the RC213V's poor turning.

With little progress seemingly being made in Qatar, Honda took one of LCR rider Takaaki Nakagami's year-old bikes for Marquez to try.

Though it's unclear what bike he used to set his best time, Marquez ended the test seventh with a 1m54.145s lap, just 0.090 seconds ahead of 2019-Honda-mounted Nakagami.

Sepang test pacesetter and Sunday's fastest man in Qatar Fabio Quartararo was first out on track, and the Petronas SRT rider set the early pace with a 1m56.255s before eventually improving to a 1m55.116s.

This stood for well over an hour, before he improved on his earlier benchmark with a 1m54.953s.

With around three and a half hours of running remaining, works Yamaha rider Vinales deposed Quartararo with a 1m54.953s as he continued to refine the 2020 YZR-M1's set-up. 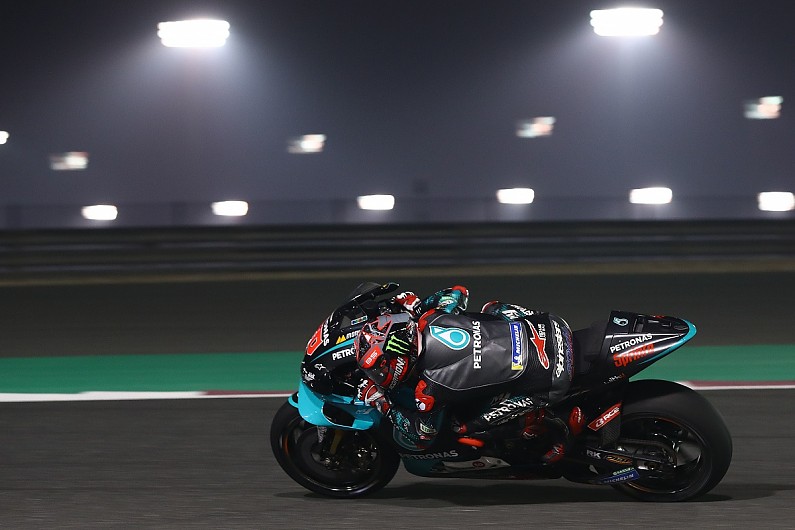 As the session tipped into its final two hours, the sister SRT M1 of Franco Morbidelli set the first 1m53s lap of the test with a 1m53.891s, while team-mate Quartararo suffered a technical issue and stopped at Turn 11 around about the same time.

Vinales had one last stab at the timesheets in the closing stages, and emerged fastest of all with a 1m53.858s to solidify his status as pre-season favourite for victory in the first race in Qatar next month.

Morbidelli made it a Yamaha 1-2, while Suzuki's Alex Rins edged ahead of Quartararo and Pramac Ducati's Jack Miller.

Joan Mir was sixth on the second works Suzuki, with Marquez, Nakagami, an impressive Brad Binder on the KTM, and Ducati's Andrea Dovizioso rounding out the top 10.

Ducati rolled out its new aerodynamic fairing on the final day at Losail, with both Dovizioso and Danilo Petrucci both trying it.

Valentino Rossi ended the day 0.474s off his pace-setting team-mate Vinales in 12th, but suffered a small crash in the latter stages which interrupted his run plan.

Aleix Espargaro was 13th on the Aprilia, beating KTM-mounted brother Pol and the Avintia Ducati of Tito Rabat.

Crutchlow, riding sore after his crash on Sunday, made a significant improvement in laptime to a 1m54.830s on Monday - but was still only quick enough for 18th, as Honda looks to be in serious trouble heading into the new campaign.