Petronas SRT Fabio Quartararo will have an 'A-spec factory' Yamaha at his disposal for the 2020 MotoGP season following a standout rookie campaign on the 'B-spec' bike this year.

The SRT rider will make the step up in hardware off the back of an impressive rookie campaign on the B-spec bike, which has featured six podiums, four pole positions and the 'rookie of the year' title.

The Frenchman currently sits sixth in the standings, one spot clear of factory team rider Valentino Rossi and four spots ahead of Petronas team-mate Franco Morbidelli.

The move will put both Quartararo and Morbidelli machine parity with works team riders Maverick Vinales and Valentino Rossi, granting them access to regular upgrades and a suite of seven engines to use across the season rather than just five for the B-spec package.

"We are very happy to confirm that we have reached agreement here in Sepang for the Petronas Yamaha Sepang Racing Team to field two A-spec YZR-M1 bikes for the 2020 season," said Yamaha motorsport chief Lin Jarvis.

"The performances of both Franco and Fabio have been excellent this year and this shows by the achievements of the riders and team in the various championship rankings they have achieved thus far both individually and as a team. 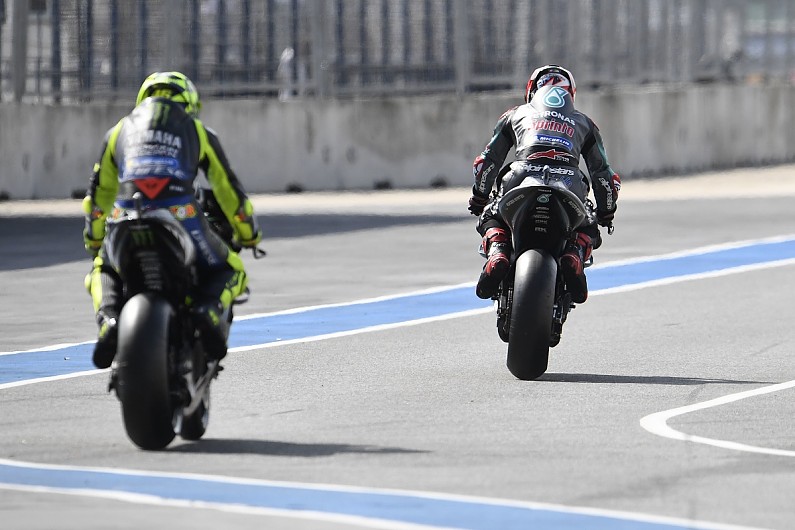 "The support of Petronas to this new team has been crucial in permitting the team to make a further step forward for 2020 with two A-spec bikes.

"Yamaha commits to providing the team and the riders our best possible support to enable them to make further progress in 2020 with race wins as well as hopefully achieving the best independent rider and team crowns."

Team boss Razlan Razali added: "Both Franco and Fabio have contributed enormously to our success this year and having both riders on equal machinery will enable us to achieve even better things.

"We are particularly proud to be able to make this announcement in Malaysia, the home of both Petronas and the team."

Quartararo was due to start his maiden campaign on last year's M1, but was upgraded to slightly de-tuned '19 engines during an impressive pre-season phase.

He has received small updates across the year, including the extra 500rpm his engines were docked at the start of the year in a bid to preserve the life of his units.