Suzuki has blamed a "hazy" regulation regarding wildcard riders for Sylvain Guintoli's exclusion from Friday's practice sessions and having to ditch its 2020 MotoGP engine for the Japanese Grand Prix.

Test rider Guintoli is making his fourth race appearance - and third as a wildcard - this year on the GSX-RR this weekend at Motegi, and was running a prototype version of Suzuki's 2020 engine.

He was encouraged by its performance after setting his "best time at Motegi ever" on Friday in 19th overall, but the stewards excluded him from the results of first and second practice for running an engine deemed illegal under homologation rules.

As a result, Suzuki also had to revert Guintoli to a current-spec motor for Saturday's action.

"We thought that, as a wildcard, it was fine for Guintoli to run the new spec engine.

"The regulation is a bit hazy, but of course we accepted [the ruling] and we swapped back to the current spec."

As Suzuki is one of the four manufacturer teams - after Honda, Yamaha and Ducati - to be running without concessions, its engines are frozen for the year once homologated before the first race.

This rule extends to wildcard riders for non-concession manufacturers.

Guintoli, who qualified 21st for Suzuki's home event, branded the Suzuki's running of an illegal engine as a simple misinterpretation. 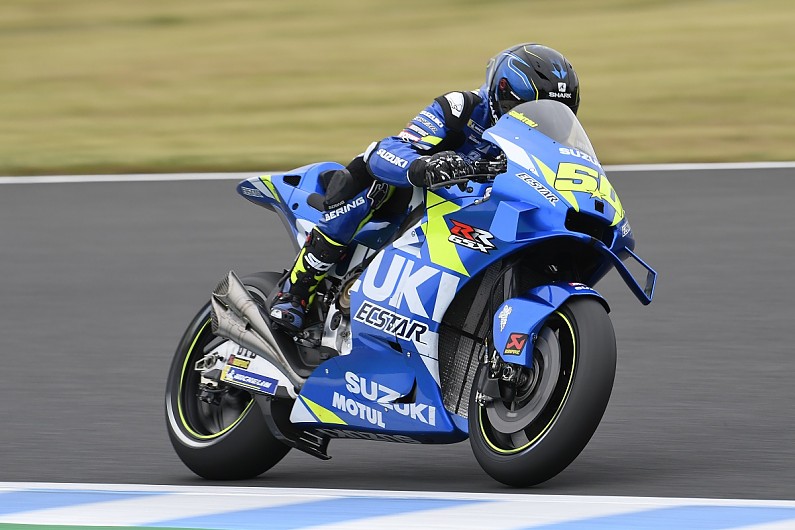 "Obviously what happened was a mistake of interpretation of the rule," he said.

"So we corrected it this morning before FP3, and rightly so the times were taken off from yesterday.

"But, in a sense of the rule I kind of agree [that this rule shouldn't apply to test riders], but it is what it is - we are not contesting anything."

Guintoli said Suzuki was only told about the ruling "not long" before FP3, and praised the efforts of his team to swap out the engines as quick as it did.

"We were told this morning not a long time before FP3," he added.

"The guys did great. It was not long before FP3, so they did a great job swapping.

"I only had one bike for FP3, they swapped the engine quickly back to this year's spec so I could do FP3, and I only started five minutes late."