Marquez was over a second clear of the field after Friday's practices, and duly delivered on his status as favourite for his ninth pole of the year ahead of his 200th grand prix start with a blistering final effort of 1m47.009s.

The opening stages of Q2 were a hot affair, with Q1 pacesetter Franco Morbidelli setting the initial pace at 1m48.495s aboard his Petronas SRT Yamaha, before being quickly demoted by Pramac's Jack Miller and Maverick Vinales' factory Yamaha.

Miller bettered Vinales's 1m48.159s on his follow-up tour with a 1m47.862s, with Quartararo on the sister SRT M1 soon edging ahead.

However, their laptimes paled into insignificance as Marquez put in his first flying lap of 1m47.050s to go almost eight tenths clear of the field.

The Honda rider managed to go slightly quicker on his last effort with a 1m47.009s, however pole looked all but certain as no one was troubling the timing screens.

But Quartararo, who battled hard with Marquez for the victory at Misano one week ago following which Marquez marked him out as a future champion, came through the first two sectors fastest of all and still held a slight advantage as he ended the third sector. 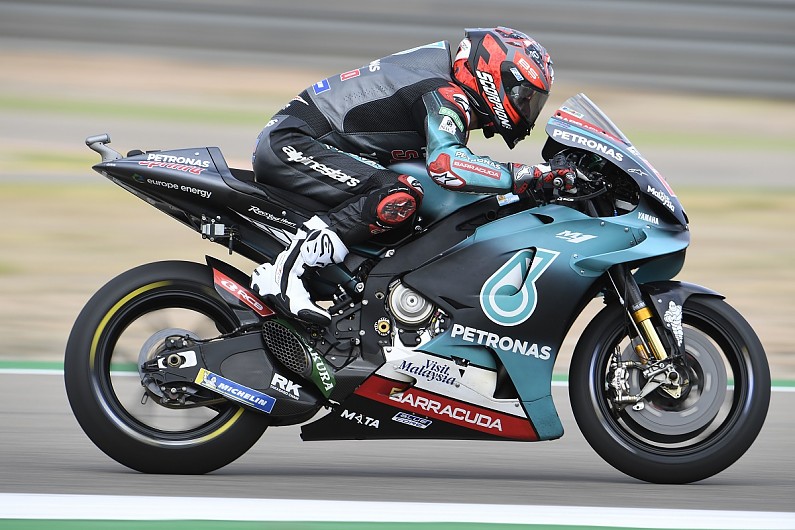 He couldn't hold that slender lead, however, and missed out on pole by 0.327 seconds in second spot.

This demoted Vinales to third and Miller off the front row, while Aprilia's Aleix Espargaro secured the marque's first top five qualifying result since the 2017 Japanese GP.

Andrea Iannone ensured two Aprilias would make it into Q2 for the first time ever.

He was last of the 11 runners present in Q2, after Pol Espargaro has been forced to sit out the rest of the weekend after fracturing his left wrist in a crash in FP4.

Alex Rins was the big-name scalp in Q1, the Suzuki rider missing out on a place inside the second 15-minute segment by over a tenth of a second.

He attempted to replicate the strategy team-mate Mir used on Friday to secure direct passage to Q2 in FP2 in using the hard rear tyre for his final run, but came up short with a 1m48.449s.

LCR's Takaaki Nakagami shadowed him in 14th ahead of the works Ducati of Danilo Petrucci and his Pramac counterpart Francesco Bagnaia.

Johann Zarco's KTM replacement Mika Kallio did hold fifth for much of the session, but was dropped back to ninth in the end.

He will start his first race since last year's Catalan GP in 18th - due to Espargaro's absence - having outpaced Honda's Jorge Lorenzo by two tenths.