Ducati's Danilo Petrucci says the recent two-day Misano MotoGP test "removed many doubts" over his performance, having suffered a difficult run of races since the summer break.

Petrucci secured his maiden win at Mugello in June, and scored a brace of third-place finishes either side of that race to put himself within range of Ducati team-mate Andrea Dovizioso for second in the standings heading into the summer break.

However, since the resumption of racing last month at Brno Petrucci has tallied up his worst results of the season with a run of eighth-, ninth- and seventh-place finishes, which have cost him third in the standings to Suzuki's Alex Rins.

Petrucci said he reverted to a set-up closer to the one he used earlier in the season during the Misano test and believes the bike has been "brought back to the standards" expected of Ducati.

"These have been useful tests because we have removed many doubts that we had," said Petrucci, who was second overall at the end of the two-day test.

"In the last two or three races we made some changes that moved us away from what was our standard level of positions.

"Here we returned to have a set-up similar to that of the races in which we went strong, and I immediately found myself [riding] better.

"We improved the bike under braking, which was an aspect we struggled with on the first day.

"But above all we have brought the bike back to the standards [expected] of our company and we have erased many doubts."

Dovizioso fine on return to action after Silverstone crash 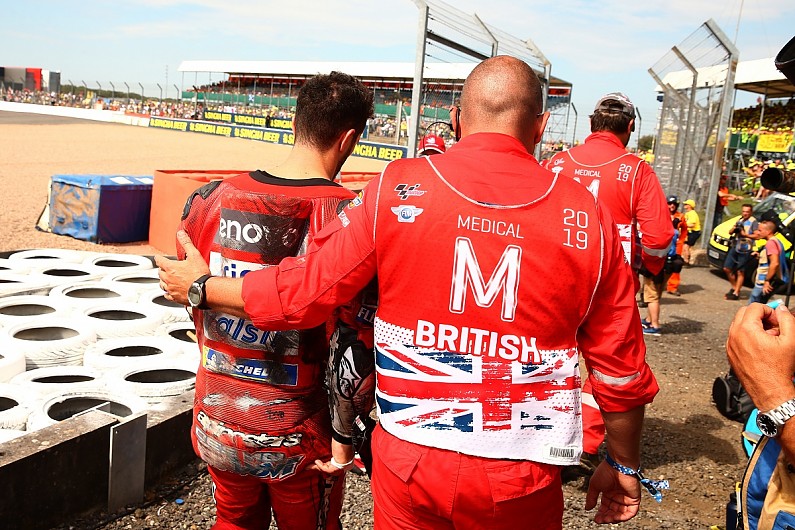 Petrucci's Ducati team-mate Andrea Dovizioso said he felt "physically good" during the two-day test, having been passed fit to ride last Thursday following his heavy crash on the opening lap of the British Grand Prix.

Dovizioso ended Friday's running 14th fastest after spending the day "fighting the bike", and felt taking part in the test was important to evaluate the "quite different" track conditions the riders will face in two weeks' time.

"It was very important to ride, also because we found quite a different track compared to last year with less grip, and also because there were also all the other riders," he said.

"And we were able to do some interesting tests in terms of [preparing for] the race, both [with] parts and set-up."

He added: "The grip is less than last year and it is very difficult to have a good feeling with the bike because when you are riding on a slow, small track like this without a lot of grip, it's really hard.

"I was fighting with the bike, I didn't ride enough in a really good way, I am not happy about that.

"We tried some set-ups, we improved something, we understood something, but it wasn't enough to be at the same level as the fastest riders.

"But it was important to make this test."