Marc Marquez broke the MotoGP lap record at Silverstone to end day one at the British Grand Prix fastest by almost three tenths of a second ahead of Maverick Vinales.

Honda rider Marquez posted a 1m59.476s in the closing moments of the 45-minute afternoon session, taking almost half a second better than his 2017 record of 1m59.941s.

That came despite a low-side crash at Vale for the reigning champion just over 10 minutes into the session, which was his first fall since May's Le Mans round.

Prior to that tumble, Marquez had installed himself at the head of the times with a 2m00.186s, briefly putting him 1.7s clear of the field, although that advantage was quickly reduced.

Morning pacesetter Fabio Quartararo was second-fastest with five minutes remaining, and after putting a fresh soft rear tyre on his Petronas SRT Yamaha he smashed the lap record with a 1m59.225s - only for that time to be disallowed for a track limits infringement.

Shortly afterwards, works Yamaha rider Vinales posted a 1m59.765s to go fastest, but he had to be content with second when he was shaded by Marquez by 0.289s.

Cal Crutchlow (LCR Honda) was the third and final rider to dip beneath the two-minute barrier, with Andrea Dovizioso just a tenth further back on the leading Ducati.

Franco Morbidelli ended up best of the Petronas Yamahas in fifth ahead of Tech3's Miguel Oliveira, the fastest of the KTM runners by more than two tenths.

Ducati pair Jack Miller and Danilo Petrucci were next up ahead of Aleix Espargaro - whose Aprilia stopped on-track at Brooklands early in the session - and Pol Espargaro on the factory KTM.

Quartararo finished 11th, having messed up his final attempt by running wide at Brooklands, ahead of compatriot Johann Zarco (KTM) and lead Suzuki rider Alex Rins. 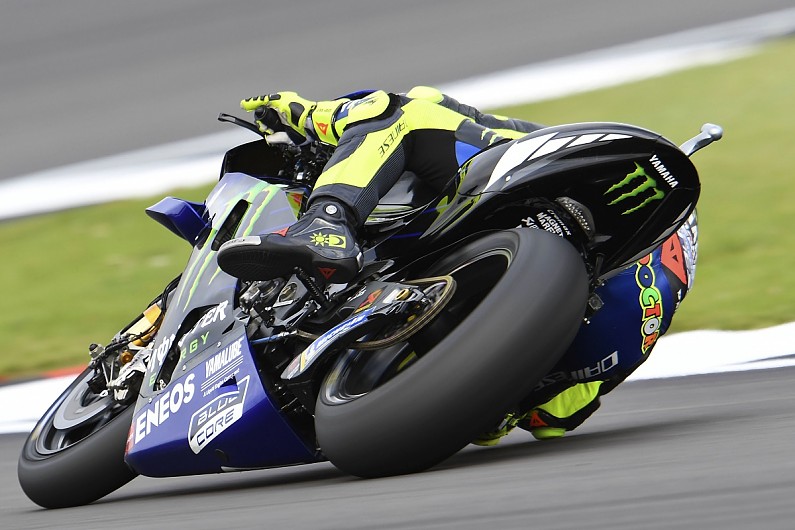 Valentino Rossi was another rider to be stripped of his best time due to a track limits infringement, leaving him all the way down in 17th position and 1.6s off the pace.