Honda rider Jorge Lorenzo says his improved MotoGP form in practice at Le Mans felt like a "small victory" as a change to his bike's seat paid off.

Lorenzo, whose first season as a Honda rider reached an early nadir with a poor showing last time out at Jerez, ended Friday practice at Le Mans fourth overall - just three tenths of a second behind pacesetter Maverick Vinales.

Three-time MotoGP champion Lorenzo had been struggling with corner entry in particular, and pursued changes to the Honda RC213V's ergonomics in order to rectify this.

At Le Mans, Lorenzo said that changes to his bike had yielded "a benefit in terms of comfort, in terms of safety in the entry of the corner", and later confirmed that he had traded the wider Yamaha-style seat unit he had been using so far for a standard Honda version.

"This type of seat from my times in Yamaha, I kept it in [my time at] Ducati, I brought it to Honda," Lorenzo explained.

"But it looks like I discovered that with this bike for the moment it's not working, and the better solution is a standard Honda seat."

Speaking about his improved pace, he said: "We need to put this in a result in the race. If we cannot do that, we cannot be really confident and demonstrate what we are able to do.

"This is just a practice but about the feelings, we make one step. It's like a small victory, but it's going to be a long process.

"As I said yesterday, for me, a small or a medium or big step, feels like a victory, and today I won something - maybe I don't win a race or I don't make a podium, but I won something.

"Hopefully we can keep this level. I don't know [about] tomorrow because probably tomorrow it's going to rain, but in the dry sessions I will keep trying more things to make the step."

Lorenzo's Le Mans weekend had got off to a difficult start when he crashed on the outside kerb at the Chemin aux Boeufs esses in the opening minutes of first practice, which he admitted was "very tough mentally". 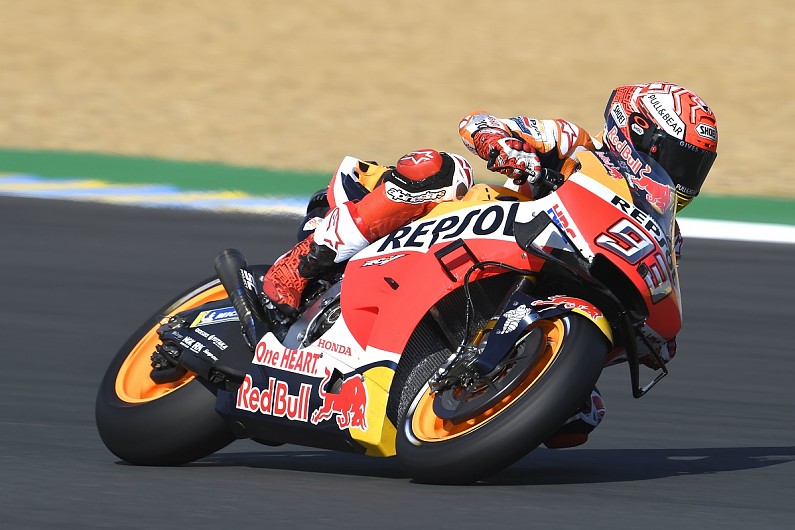 Team-mate Marc Marquez, who finished the day in second overall, nearly fell at the same spot later in the same session, using his body to keep his Honda upright at the last moment.

Marquez then looked close to crashing on several occasions in the afternoon session.

"This morning was the good save, a big save, and difficult - I was on the kerb and I pushed a lot with the elbow to save the crash," he recalled.

"In the afternoon, I was using the hard rear tyre and was good but since you don't get the correct temperature, this first two-three laps were very difficult to get the temperature on the tyre - but if you don't take a risk, then the temperature never arrives.

"[So I] was trying to be aggressive and then this created some slides I did not expect, but always inside the limit."