Reigning MotoGP champion Marc Marquez set the pace for Honda on the first day of 2019 pre-season testing at Sepang despite not being fully fit.

Marquez, who is still recovering from surgery that was required to fix his troubled left shoulder, took over the top spot from Alex Rins just before the halfway point of the eight-hour session.

He ended his programme for the day soon after having completed 29 laps, as he opted to rest and prepare for the second day of testing on Thursday.

Despite this, Marquez's best time of 1m59.621s went unthreatened, even as track activity increased in the cooler temperatures of the session's final hour.

Suzuki rider Rins had to settle for the runner-up spot, a quarter of a second behind Marquez and half a tenth up on Maverick Vinales, who led the way for Yamaha in third.

Avintia Ducati rider Tito Rabat broke into the top 10 late on and then snatched a top-four spot in the dying minutes.

He ended the day as top representative for Ducati, narrowly overhauling works team newcomer Danilo Petrucci, who had headed the session before Rins took over. 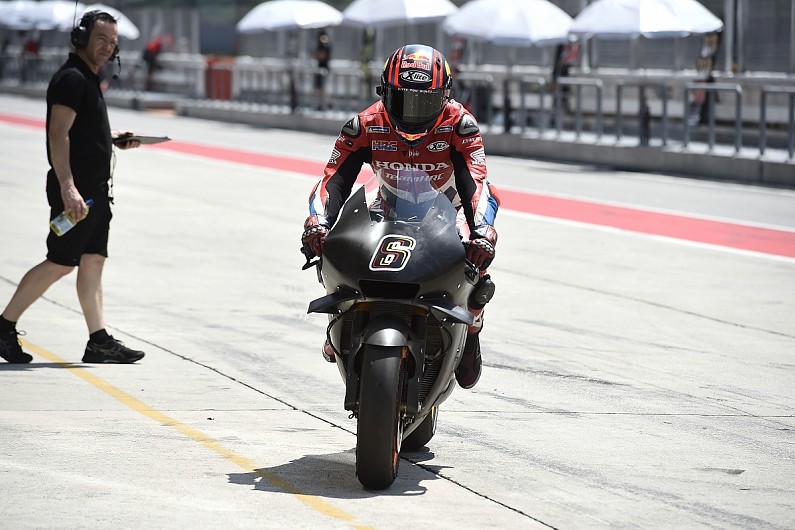 Honda tester Stefan Bradl, deputising for the injured Jorge Lorenzo at Honda in the Sepang test, took the ninth spot.

Early pacesetter Pol Espargaro crashed on a quick lap in the closing stages of the session, but still finished as the top KTM in 10th, beating new team-mate Johann Zarco by over eight tenths.

Zarco, who struggled to get to grips with the RC16 during post-season testing last year, had another low-key showing.

Jack Miller, who crashed around the same time as Espargaro, took 11th for Pramac Ducati, ahead of Franco Morbidelli on the Petronas SRT Yamaha.

Aprilia's Aleix Espargaro had topped the Sepang shakedown last week, but he ended up 13th on Wednesday, while his new stablemate Andrea Iannone had his day disrupted by a crash on his first run.