Valentino Rossi has admitted his podium in MotoGP's French Grand Prix owed more to the Le Mans track layout than any major breakthrough for Yamaha.

The seven-time premier class champion claimed his first top-three finish since the Qatar season opener on Sunday, coming home behind Marc Marquez and Danilo Petrucci after Andrea Dovizioso and Johann Zarco both crashed out.

It followed a tough Saturday for both factory Yamaha riders, as Rossi and Maverick Vinales qualified on the third row while Tech3 man Zarco claimed pole.

Rossi explained that changes made after qualifying made a difference to his race performance, but conceded that the biggest help was the Le Mans track being a favourable one for Yamaha.

"In qualifying I was slow and I started just from ninth position," said Rossi.

"Sincerely I was quite pessimistic because the work that we did on Saturday, at the end was not good.

"But we worked hard and we made some modifications on the bike and they worked well. We improved a lot, improved the acceleration, improved the grip. 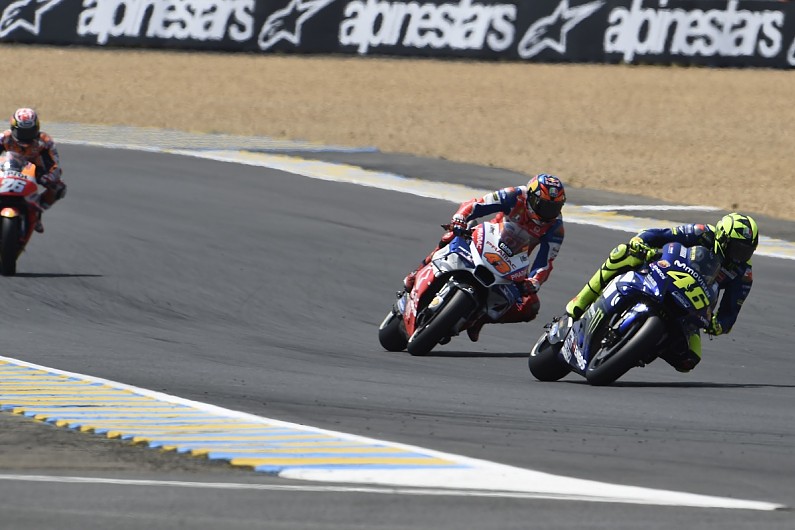 "When you start from the third row, everything has to go in a good way. But I did a good start and I was fast in the first laps and I stayed with the top guys.

"But this track for us is usually fantastic always; last year Yamaha dominated. I crashed, but if not, we'd have arrived first, second and third."

Asked if the breakthrough he made on Sunday morning would help Yamaha for the rest of the year, Rossi replied: "I prefer to [tell] you [that] it is good for the other racetracks, but unfortunately it is the racetrack that helped us a lot.

"We don't have a particular problem, the problem is just our opponents are a little bit faster. We hope that we can improve the bike during the season."