Yamaha MotoGP rider Valentino Rossi says he had to "slow down a lot" after further issues with his tyres during Sunday's Austrian Grand Prix.

Neither Rossi or team-mate Maverick Vinales could mount a credible podium challenge in Sunday's Red Bull Ring race, with Vinales finishing sixth ahead of Rossi.

Both riders kept up with the leading group early on but lost ground after individual off-track excursions and were unable to recover, with the pair following satellite Tech3 Yamaha rider Johann Zarco home.

Rossi and Vinales both chose to use the hard compound rear tyre in the race, but Rossi - who on Saturday blamed his tyres for a "difficult" seventh-place starting slot - said he still experienced a "big drop" in performance before mid-distance.

"[It] was a difficult race for me, also for Maverick, for all the team - we expected and hoped to go faster, to be stronger," said Rossi.

"I think we did the maximum.

"We don't have any regrets about the [bike] setting and the tyre choice.

"On the first lap I was strong and I think the hard for us was the right option; we worked a lot to try to not destroy the rear tyre.

"But after 12 laps I had a big drop from the rear tyre and I had to slow down a lot; the bike became very difficult to ride.

"I also did one mistake in braking, but anyway I was slow."

Rossi said those in-race woes exposed how far Yamaha is behind Ducati and Honda - whose riders locked out the top four finishing positions - with its rear tyre management.

"We have to work because we stress the rear tyre too much - and especially Honda, Ducati are fast without using too much the rear," he said.

"If you look at the fastest lap and fastest sectors, we are very close - two Yamahas set the two fastest laps, me and Zarco - but after we had to slow down and lose the fight.

"A lot of times this year this problem happens; we've worked hard, we try - in some races, we suffer less.

"But when we suffer like this, it becomes very difficult because in the second half of the race we are not strong enough." 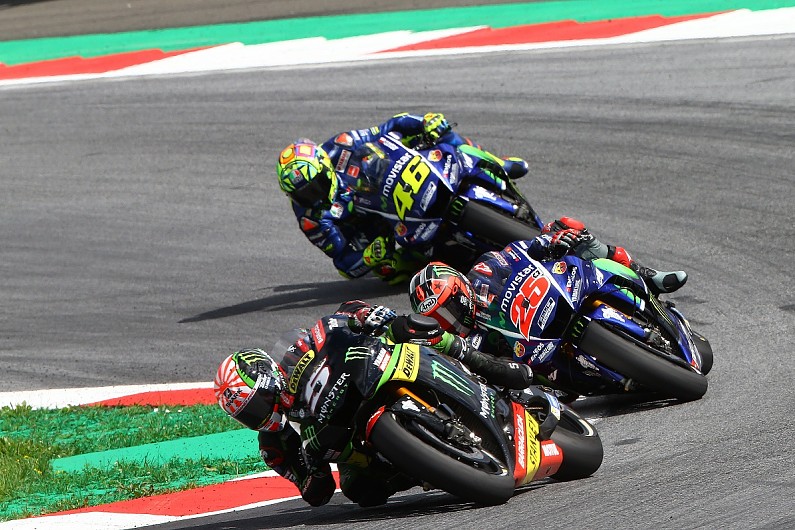 Vinales said he too expected more from the race, but had been hampered by a "strange" inability to make the rear tyre work.

"I expected to be at the front, fighting for the win," he said.

"But we were quite unlucky, especially with the rear tyres, they were sliding a lot.

"Zarco's [2016 Yamaha] bike was accelerating quite a lot, and it's something very strange that the Tech3 is making the tyres work and we can't do it.

"The problem is that we have no rear grip, the rear tyre drops so much and so quickly."