KTM is "starting to see the light" with its new MotoGP project, Pol Espargaro believes, after scoring its first points in the Argentinian Grand Prix.

The Austrian manufacturer acknowledged points would be hard to come by in its maiden MotoGP season, but capitalised on a crash-laden race at Termas de Rio Hondo to score with both riders as Espargaro and Bradley Smith finished 14th and 15th.

Racing at a track where it has not already tested for the first time, the KTM pair qualified 18th and 19th in the wet, and Espargaro raced with Marc VDS Honda's Tito Rabat and Avintia Ducati's Hector Barbera all the way to the line.

"What is the most important for the guys and the whole team is that this is the first time in history that KTM has taken points in MotoGP," Espargaro said.

"But on the other side, I think we had the opportunity to do a little more.

"We are missing some speed in the straight to overtake the two guys I was fighting with, Barbera and Tito.

"It was a shame because I felt faster, and we were faster.

"We could have been in front of them at the end of the race, but it was impossible to do it.

"We still have some weak points, but on the other side, I congratulate the guys, they are doing a good job.

"We are making steps, for sure we are still far away but we are starting to see the light." 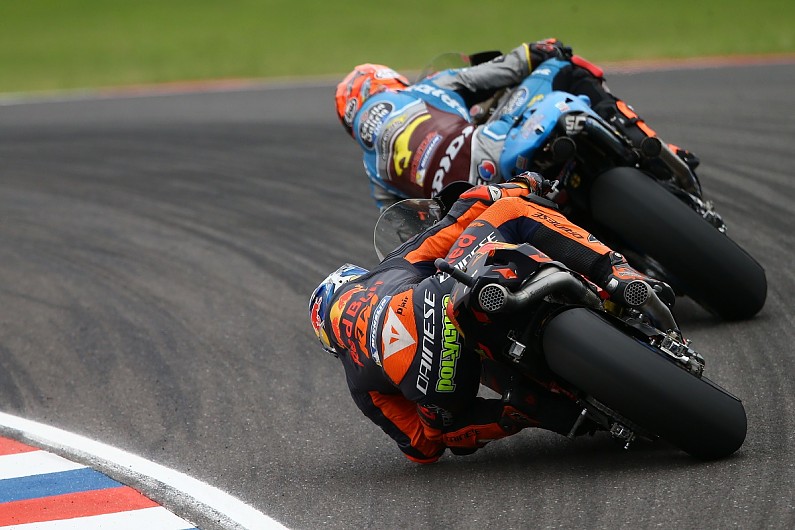 Espargaro and Smith set the 19th- and 21st-fastest laps of the race, 1.318 and 1.583 seconds off the benchmark set by winning Yamaha rider Maverick Vinales.

The KTMs beat Aprilia rookie Sam Lowes home in Qatar, but ran largely on their own in the season opener, and team manager Mike Leitner says actually racing other bikes in Argentina only helps the RC16's development.

"If we do the correct things, we will have more interesting races where we can fight with the other manufacturers and riders," he said.

"This is what was super positive because for the first time Pol was directly fighting with other riders.

"He could see the strong and the weak points of the bike even better and the lap times were acceptable. This was a brand new track for us, and we have to be realistic.

"A lot of tracks we go to now will be new for us. We can only take the positives with us and try to learn, and to improve.

"Then next year when we come back to these places we will have already reached another level in our package."