Honda's Marc Marquez says he felt more pressure in the 2016 MotoGP season than he does this year, facing up to Yamaha recruit Maverick Vinales

Marquez won a third championship in four seasons last year, despite Honda's struggles with acceleration, and admitted it was the first time he really felt pressure.

All eyes are on the Spaniard to fight for the 2017 title with countryman Vinales, who has won the first two races of the season, but Marquez says he does not feel in the spotlight as much this time around.

"Of course you feel the pressure to be there, to fight for the championship.

"They have a really good package, they are really consistent and we need to work together with Honda to try to find a better way to improve our results."

Honda has revamped its engine configuration again in 2017, but engineers are still working to mate the package with MotoGP's control electronics, leaving riders battling an acceleration deficit again. 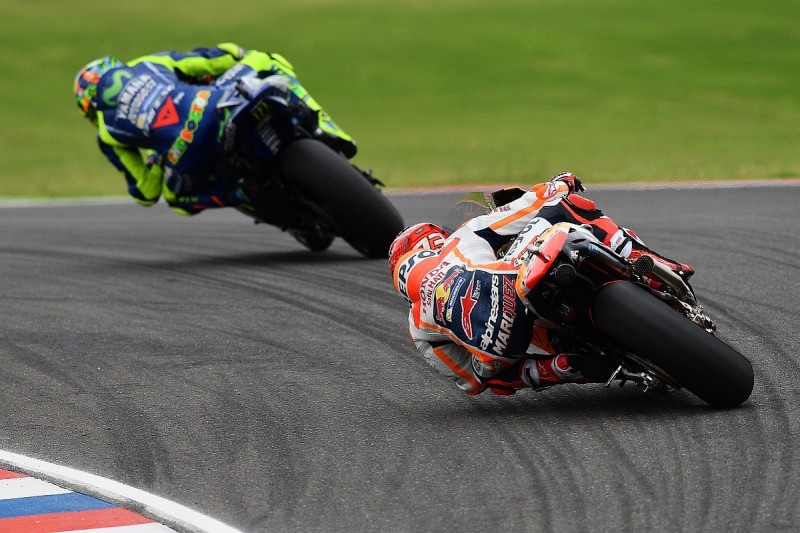 Marquez finished fourth in the season opener in Qatar, but crashed out of the lead last Sunday in Argentina, and sits eighth in the championship, 37 points behind Vinales.

He started 2016 with third in Qatar and victory in Argentina, and scored points in every race until crashing out of the Phillip Island race in October, after he had secured the title.

"In your career you always have good and tough situations - I don't like to say 'bad'," he added.

"But it's in these moments that you have to try to learn and get better. We weren't so good at the start of the last season and we won.

"This year we didn't start in the best way, but there is a long season left. We have to learn what we did wrong to improve the bike.

"I'm eighth in the championship, I'm behind. But is important to know that we are in a good level, because we fell in Argentina in the lead.

"However for now the two Yamahas are very strong, Vinales and Valentino."