Aspar rookie Izan Guevara was declared winner of a twice red-flagged Moto3 Grand Prix of the Americas, which was ended by a horrifying multi-rider crash involving points leader Pedro Acosta.

The race was initially red-flagged on lap eight after a heavy crash for Prustel GP rider Filip Salac, who was launched from his KTM exiting the Turn 11 hairpin onto the back straight.

Aspar rookie Guevara led the field at this point on his GasGas having taken over at the front of the pack with a daring move on Xavi Artigas at Turn 3 on the second lap.

Artigas led off the line at the original start but was deemed to have gone before the lights went out and was hit with a double long-lap penalty.

Championship leader Pedro Acosta found himself in eight and would start there for the restart, putting him much closer to main title rival Foggia.

A five-lap sprint race was scheduled for the restart, with Guevara leading Foggia and McPhee forming the front row. 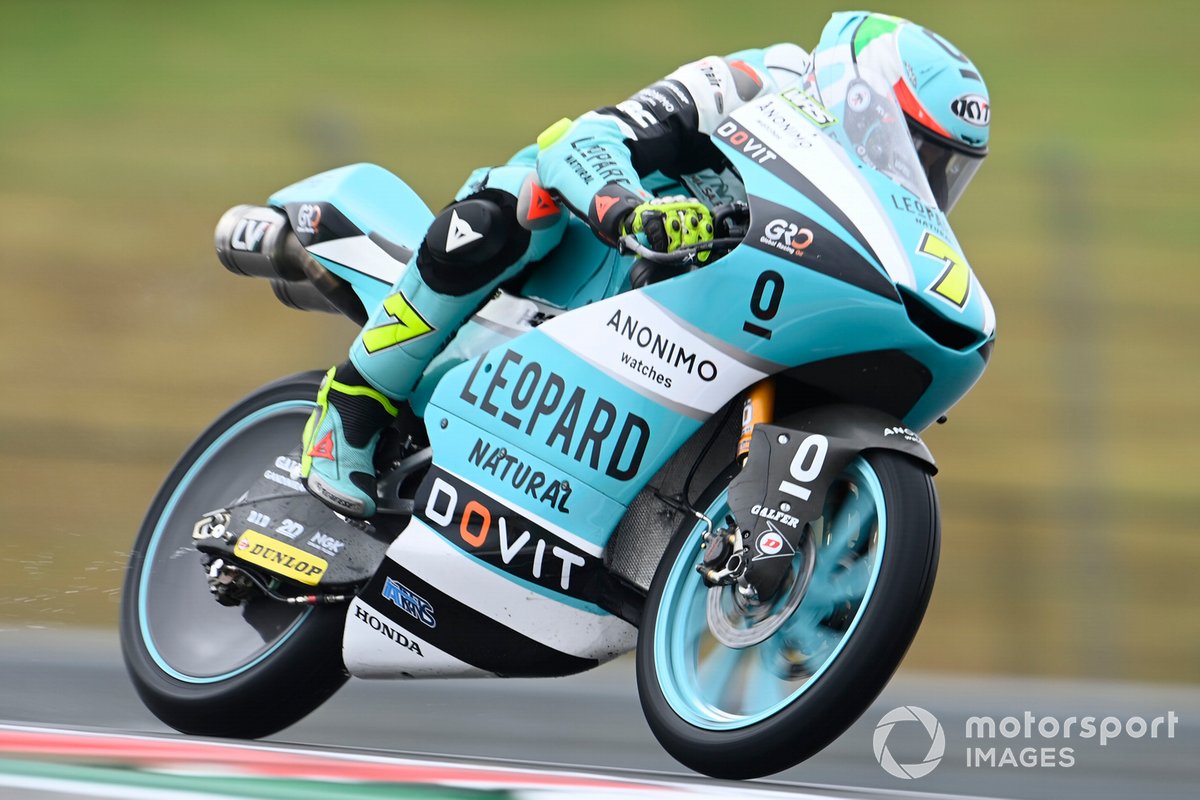 But the race was stopped again on the third lap when Tech3 rider Deniz Oncu clipped the front wheel of Jeremy Alcoba’s Gresini Honda on the back straight.

The Spaniard crashed in front of the chasing pack, with Snipers rider Andrea Migno and Acosta left with nowhere to go – both hitting Alcoba’s stricken machine.

Both riders were launched into the air in a terrifying accident, with Acosta coming down heavily and tumbling heavy across the track.

However, all riders involved miraculously walked away from the incident unscathed.

Confusion followed as to what would happen next as no result could be declared based on two laps of a five-lap sprint.

Following a meeting between the Moto3 team bosses and representatives from the International Race Teams Association and the FIM, it was decided to declare a result based on the finishing order of the red-flagged first race.

This meant Guevara secured his maiden win in the class despite being forced to retire from the five-lap dash on the second lap with a mechanical issue while he was leading.

Foggia was handed his fifth-straight podium and has cut eighth-placed Acosta’s championship lead down to 30 points, after full points were awarded for the result.

McPhee completed the podium for his first rostrum since winning at Misano last year, with poleman Masia fourth ahead of Oncu and Alcoba.

Darryn Binder on the sister Petronas Sprinta bike headed Acosta, with Tatsuki Suzuki on the SIC58 Honda and Migno completing the top 10.

Sergio Garcia’s championship hopes took a knock when he was forced to withdraw from the race after suffering bruising to his kidney in a crash on Friday.

The Aspar rider is now 50 points adrift of Acosta in third in the standings with just 75 left up for grabs in 2021.