KTM Ajo's Raul Fernandez led the opening free practice Friday for the 2020 Moto3 season, after surging to top spot late on in FP2 for the Qatar Grand Prix.

The coronavirus outbreak led to the Qatari government imposing new travel and quarantine measures, which meant the opening round of the year has had to go ahead without MotoGP on the bill.

The Moto3 field was first out on track on Friday at Losail, with last year's Valencia Grand Prix winner Sergio Garcia guiding his Estrella Galicia 0,0 Honda to the top of the pile late on with a 2m05.407s lap.

One-time grand prix winner Tatsuki Suzuki shadowed him at the end of the 40-minute outing aboard the SIC58 Squadra Corse Honda while Alonso Lopez rounded out the top three in his first official session with the Max Racing Husqvarna squad.

VR46 rider Andrea Migno took the ignominious honour of becoming the first crasher of 2020, when he tipped off at Turn 11 in the early stages.

Albert Arenas (Aspar Team) was the other faller in FP1, the Spaniard chucking his KTM at the scenery of Turn 16. 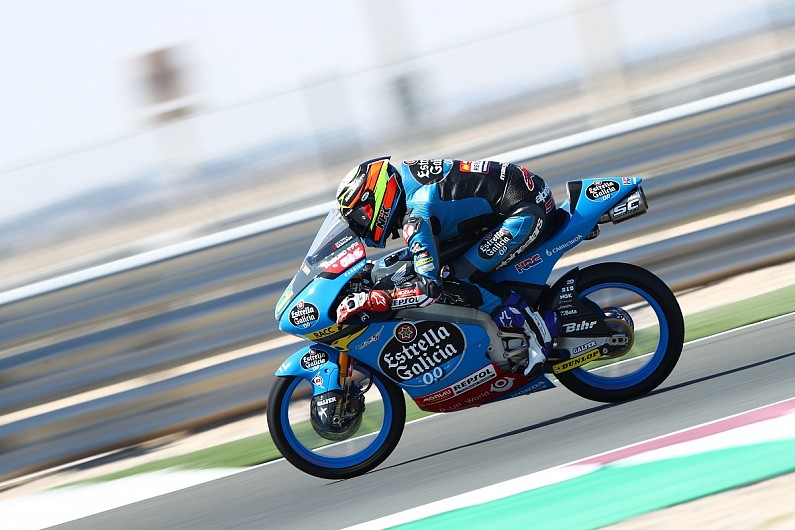 His team-mate Kaito Toba - who has switched from Honda Team Asia this season - would set the best time of the day with around 17 minutes to go with a 2m04.988s.

This was usurped by former team-mate Ai Ogura on the Team Asia Honda in the closing stages with a 2m04.698s, though Fernandez would reassume control on his final attempt with a 2m04.577s.

Ogura was shuffled back to fourth after the final salvo, with Toba, Arbolino, Migno, Leopard Honda's new signing Jaume Masia, the second Max Racing bike of Romano Fenati and rookie Deniz Oncu rounding out the top 10 for Moto3 debutants Tech3.

The top 14 riders at the end of Saturday's FP3 session will go directly into the pole shootout in qualifying.

After suffering in injury in the pre-season, SIC58's Niccolo Antonelli will sit out this weekend's action.