Tatsuki Suzuki clinched the first Moto3 pole of the 2020 season after beating Raul Fernandez by 0.008 seconds in qualifying at Qatar

The SIC58 Squadra Corse rider had to go through Q1 after missing out on a top 14 place across the three practice sessions.

Suzuki set the pace immediately in the second 15-minute session on Saturday evening at Losail, guiding his Honda to a 2m04.815s before bailing back to his box.

No one challenged Suzuki's time on their first runs, though his provisional pole did come under threat late on when last-minute repairs to his seat unit meant he was unable to get across the line for a second time attack.

Ajo KTM's Fernandez found himself a useful slipstream on the run along the massive one kilometre pit straight, but came up just 0.008s short and will have to start from second - his first front row since last year's British Grand Prix.

Three-time Moto3 race winner Albert Arenas (Aspar Team) just made it into the Q2 graduation places at the end of the first session and went onto complete the first front row of 2020 with a 2m04.925s.

Fernandez's late improvement demoted CIP's Darryn Binder to the head of the second row in fourth, with Honda Team Asia's Ai Ogura and the Leopard Honda of Jaume Masia alongside.

Gresini's Gabriel Rodrigo was fastest in Q1, but could only muster 13th by the end having had to abandon his final time attack lap due to a mechanic issue with his Honda machine. 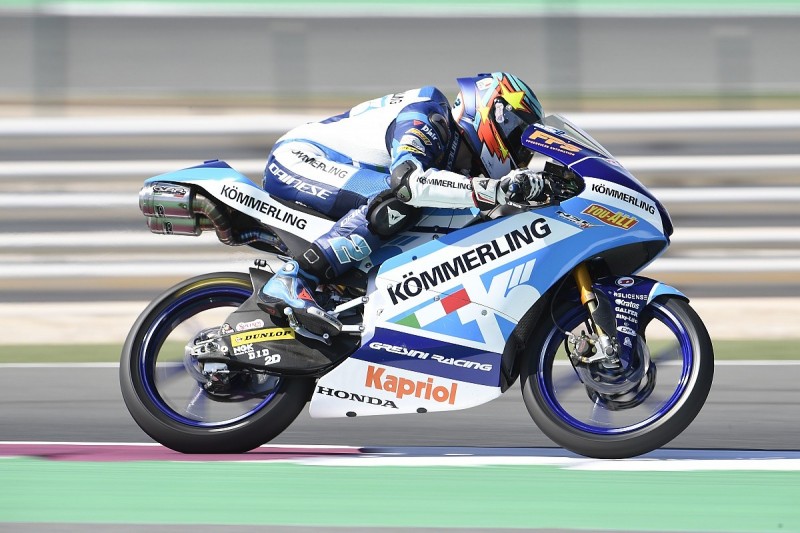 New Leopard signing Dennis Foggia was denied a place in Q2 at the death of the first 15-minute session, with Arenas' late improvement shuffling the ex-VR46 Academy rider out.

He'll start 19th on Sunday, having missed a Q2 place by just 0.035s, while Qatar test pacesetter Filip Salac starting alongside after the Snipers Team rider crashed late on.

Salac tucked the front of his Honda after getting out of control on the way into the Turn 6 left-hander on his final lap and was lucky not to wipe out Niccolo Antonelli's SIC58 stand-in Jose Julian Garcia.

There was controversy at the end of the session, when Alonso Lopez (Max Racing Team) made what appeared to be deliberate contact with Suzuki at the first turn after punching his shoulder in frustration just after the pair took the chequered flag.