Nine-time world champion Rossi entered his own team into the Moto3 class back in 2014, and was immediately a force to be reckoned with - former rider Romano Fenati claiming four wins that season including one at Mugello.

Since winning the 2016 Austin race, times have been difficult for VR46.

Four podiums were all Fenati, Nicolo Bulega and Migno could manage in the remainder of 2016, with long-time Rossi protege Fenati sensationally dropped by the team mid-season amid discord.

Struggles with the new KTM chassis has also hindered the team, with neither Migno or Bulega registering a rostrum in this season's opening five races.

Starting from 12th on the grid at Mugello, Migno quickly worked his way through the massive lead pack and by the seventh lap had found himself in the lead after scything past championship leader Joan Mir into the Luco chicane early in the lap.

As is typical at Mugello in Moto3, Migno's lead was shortlived. Once again he made a move for the lead with four laps to go, but it was not until the final lap that he made a pass stick.

The Italian had compatriot Fabio Di Giannantonio on the Gresini Honda on his tail throughout the final lap, and looked to have called his strategy wrong as he led out of the final corner for the last time. 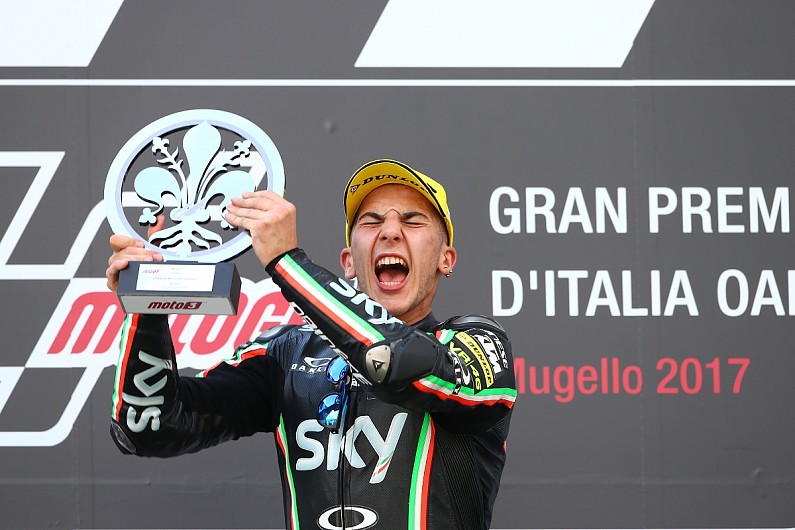 But weaving along the pit straight in a bid to keep Di Giannantonio behind, Migno held on to clinch his first win in the world championship and the first for KTM this season, ending Honda's best season-starting run in the third tier since 1995, as the top 15 bikes finished within 1.5 seconds.

After a tough race for championship leader Joan Mir, who was pipped to sixth by poleman John McPhee, Migno's win moves him up to fifth in the standings and 40 points adrift.

Di Giannantonio's second brings him within 37 points of Mir, while a maiden podium for RBA Racing's Juanfran Guevara keeps him an outside bet for the 2017 title 58 points back in eighth.

Enjoying a strong start to its intermediate class campaign, the team has reached the podium on two occasions courtesy of Bagnaia, who finished second in Spain and again in France after a battle for the win with Moto2 championship leader Franco Morbidelli.

Rossi himself starts his home MotoGP race from second on the grid later on Sunday, despite being injured in a motocross crash last week.