Moto3 championship leader Brad Binder will move up to Moto2 in 2017 with KTM, when the Austrian manufacturer joins the series.

KTM will enter MotoGP - with Bradley Smith and Pol Espargaro - and Moto2 at the same time, on top of its Moto3 programme and its role supplying machinery for the Red Bull Rookies Cup.

Ajo Motorsport will field Binder and Miguel Oliveira on the new KTM Moto2 chassis next year.

The Finnish outfit runs the factory KTMs in Moto3, and is already in Moto2 with reigning champion and 2016 points leader Johann Zarco on a Kalex.

"We see the intermediate class mainly as a platform for keeping riders in the KTM family, which begins with the Red Bull MotoGP Rookies Cup and will run right through to MotoGP," KTM motorsport director Pit Beirer said.

"The WP motorsports department has been fully integrated into KTM, and just as it is in Moto3 and MotoGP, the new Moto2 bike is being developed and built completely in-house.

"Brad Binder has had a very successful season this year and hopefully he will wrap up the championship.

"Now we're happy that he can step up into the new Moto2 team.

"Also, we're very pleased to welcome Miguel Oliveira back into the orange family after one year in Moto2." 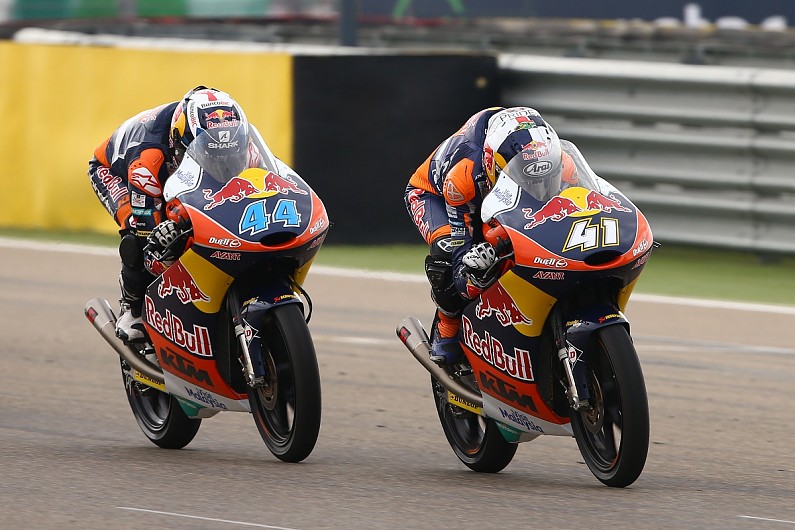 Binder leads the Moto3 standings with Ajo by 106 points, and with only 125 up for grabs over the remaining five races he can wrap up the title at Aragon later this month.

"After how this year has been, there is nothing that could excite me more than staying at KTM Ajo and competing in Moto2," the South African said.

"I know it will be very difficult, but I'm very motivated for this and I am already looking forward to it.

"It will be nice to start in a new class, with everything new and a lot to learn.

"My goal is to go out each day and give 110% to learn as quickly as possible.

"I am very happy to be back sharing a garage with Miguel, I learned a lot from him in 2015 [as KTM Moto3 team-mates] and sure we will push each other; we will have fun.

"Everyone knows that if KTM Ajo make a motorcycle, it will be good."

Oliveira finished runner-up to Danny Kent in the 2015 Moto3 standings, and is currently 17th in his rookie Moto2 campaign.

KTM has already started testing its Moto2 chassis, and Binder and Oliveira will start riding it in the middle of November.