Toyota strengthened its grip on the Le Mans 24 Hours as the race reached the halfway mark, with the #7 crew maintaining the advantage over the sister #8 machine.

With both Toyota GR010 Hybrids on slightly differing pit strategies, the lead of the race changed hands multiple times in the early morning hours following the safety car period at the eight-hour mark that brought both cars together on track.

Mike Conway took the initiative in the #7 Toyota when Kazuki Nakajima came in from the lead to hand over the #8 car to Sebastien Buemi in the 10th hour, but Buemi was able to cut the deficit to around 20 seconds before the gap stabilised.

Conway pitted in Hour 11 to allow Kamui Kobayashi to take over the #7 car, allowing Buemi to close to within four seconds, but Kobayashi soon began to pull away and by the time the Buemi exited the cockpit in favour of Brendon Hartley the gap was back out to over 20s.

As the clocks hit 4am local time, Kobayashi enjoyed a healthy buffer of 1m50s over Hartley, with both Toyotas having made 14 pitstops.

The Alpine A480-Gibson continued to circulate in a distant third place and three laps off the lead, Andre Negrao taking over from Nicolas Lapierre towards the end of the 10th hour.

Lapierre had at least managed to get back in the overall podium positions after a spirited battle with the #708 Glickenhaus 007 LMH of Olivier Pla, which runs fourth and four laps down with Franck Mailleux at the helm.

The sister #709 Glickenhaus of Romain Dumas was six laps off the lead and 10th overall behind a clutch of LMP2 cars. 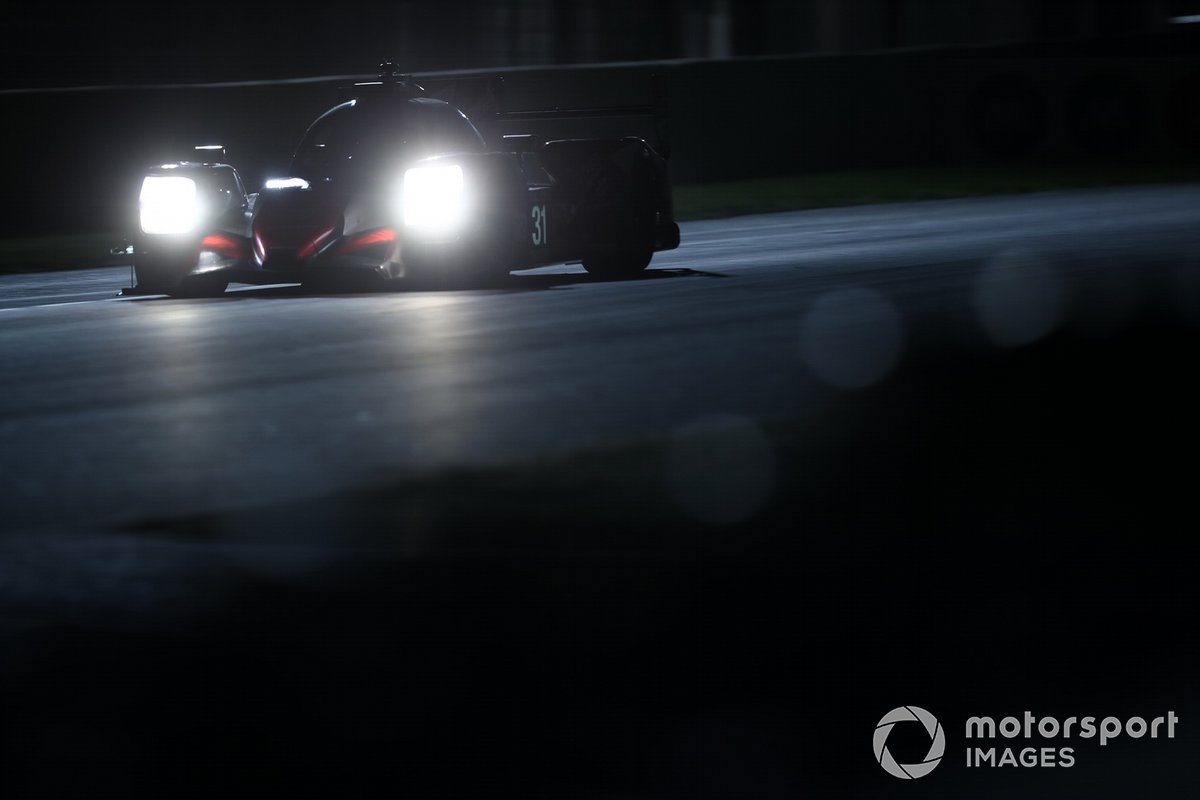 The battle for the LMP2 class lead cranked up as the race hit the halfway mark, with Team WRT’s pair of ORECA-07 Gibsons maintaining their lead.

However, the #31 car that led by almost a minute after the safety car period led by just three seconds in the hands of Charles Milesi ahead of Ye Yifei, who made steady inroads on his opposite number since taking over the #41 machine from ex-Formula 1 star Robert Kubica.

United Autosports’ lead car, the #22 ORECA, was third in the hands of Fabio Scherer, but still 1m49s off the lead fight, while the #65 Panis Racing and #28 JOTA cars made up the top five.

A spin for Esteban Garcia in the #70 Realteam Racing ORECA meant that DragonSpeed took over the lead of the Pro/Am subclass, with Juan Pablo Montoya at the wheel.

Ferrari maintained its control of the GTE Pro class, with its pair of factory AF Corse-run 488 GTE Evos holding a one-two with the #51 machine of Alessandro Pier Guidi heading up the #52 car of Sam Bird by 1m47s but with one less stop completed.

Jordan Taylor had the #63 Corvette C8.R splitting the Italian cars, albeit slowly losing ground to the #51 Ferrari, but the American car slipped to third just after Taylor handed over to Nicky Catsburg - albeit with Catsburg harrying Bird’s Ferrari in the fight for second.

Porsche’s two factory 911 RSR-19s held fourth and fifth places, with Michael Christensen 23s back from the Bird/Catsburg fight in the better-placed car, the #92.

The GTE Pro class suffered its first official retirement when the #79 WeatherTech Porsche dropped out courtesy of a crash for Cooper MacNeil at the Ford chicane in the 11th hour. Repairs were attempted before Porsche revealed that the chassis had sustained damage.

In GTE Am, Ferrari likewise led the way with Nicklas Nielsen in the #83 AF Corse entry around a minute clear of Dylan Pereira in the #33 TF Sport Aston Martin Vantage GTE.