“They called us the twins in the American Le Mans Series,” says Timo Bernhard of his long and fruitful partnership with Romain Dumas, “because we were the same height. I always said he had the prettier face, he thought otherwise!”

It’s rare that two drivers enjoy such prolonged success in as many different cars and settings as Bernhard and Dumas. Together, they notched four Nurburgring 24 Hours victories between 2007 and 2011, as well as winning the Le Mans 24 Hours and Sebring 12 Hours outright and claiming two ALMS class titles in LMP2. The partnership started fittingly too, with Petit Le Mans GT spoils on their first time paired together in 2003.

Bernhard regards Webber, one-third of Porsche’s 2015 WEC LMP1 title-winning line-up with Brendon Hartley, as a team player he “learned a lot from” and particularly cites his “feel for a car at super-high speeds past 270, 280 [km/h]”. Webber’s presence in the team gave Bernhard “this feeling we get extra”.

“And with Romain it was a very similar feeling,” explains Bernhard, who also counts an outright Daytona 24 Hours victory to his name in 2003. “In the end it’s just a fraction of a percentage over Mark. Probably because of the number of years, and also the different championships and types of cars, I would pick Romain.

“With Romain it was like a logical fit; same height, same seat and tremendous success in all areas, in all championships; shorter races, longer races. He was more aggressive than me, but it just fitted together very well. Probably in that era we were the strongest pairing.”

Their ALMS giant-killing displays with the “light and nimble” Penske-run Porsche RS Spyder LMP2 car, a frequent thorn in the side of the more powerful but heavier Audi R10s that culminated in outright glory at Sebring in 2008 together with Emmanuel Collard, meant Bernhard and Dumas were in high-demand. They were loaned to Audi’s R15 LMP1 programme as a package and duly took top honours at Le Mans in 2010 with the revamped R15-plus when they were joined by another old Porsche hand, Mike Rockenfeller. 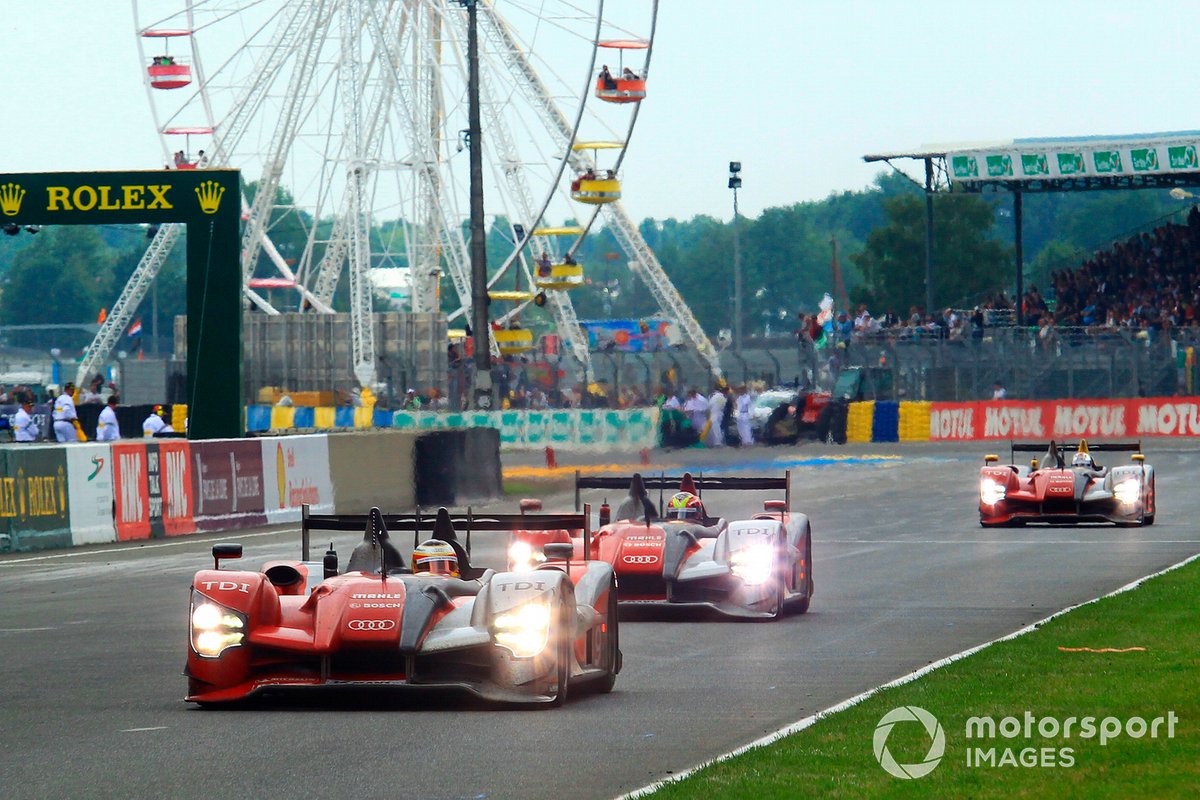 Following a reliability disaster for the faster Peugeot 908s, they set a new distance record of 397 laps that has still yet to be beaten, heading home a 1-2-3 for Ingolstadt over Audi’s next golden trio – Andre Lotterer, Marcel Fassler and Benoit Treluyer. Its leading line-up of Tom Kristensen, Allan McNish and Dindo Capello had to settle for third, after Kristensen was forced off by Andy Priaulx’s BMW at the Porsche Curves and damaged the rear bodywork.

“I think at that time we were really on the top of the pops of our ability but also of our strength as a pairing,” reflects Bernhard. “We smoked the Audis in the ALMS, so we were completely dialled in. When [Audi] got the chance, they were asking at Porsche if they could have us – for this pairing. That’s why they kept us also at Audi as a pairing.

“I think we could have delivered as well individually, splitting up, but they saw the strength and said, ‘We have to keep them together’.

"He drives by feeling and he has his ability to make something out of nothing. That was one of his strengths, so I was not worried at all with him on the Nordschleife" Timo Bernhard

“We got Mike Rockenfeller, who was also out of this Porsche school, so it was kind of the Porsche car inside the Audi team. It was the car which I think over the week at Le Mans [in 2010] was the strongest trio to be honest, and in Audi it was also kind of the running joke that the Porsche car inside the Audi team won. They saw the success and the functioning team that we had, they really appreciated that.”

Racing on the unforgiving, often bumpy and narrow tracks visited by the ALMS – such as Sebring, “where you have to be a little bit freestyle” – suited Dumas down to the ground. And it also served as useful preparation for him to become a modern Ringmeister, as he won on his first 24 hour-race start at the Nurburgring in 2007 as he and Marc Lieb joined 2006 winners Bernhard and Marcel Tiemann in their Manthey Porsche.

Bernhard and his Porsche bosses “pushed for him” before team boss Olaf Manthey relented, electing to field the Frenchman from the start of his first VLN race for which Bernhard had qualified on pole.

“He said for the entire first lap he didn’t breathe properly, his eyes were wide open!” Bernhard chuckles.

Dumas helped Manthey to secure four on the trot by winning on each of his first three starts between 2007 and 2009, adding a fourth victory in 2011 as Bernhard matched Tiemann and Pedro Lamy’s outright record of five wins. 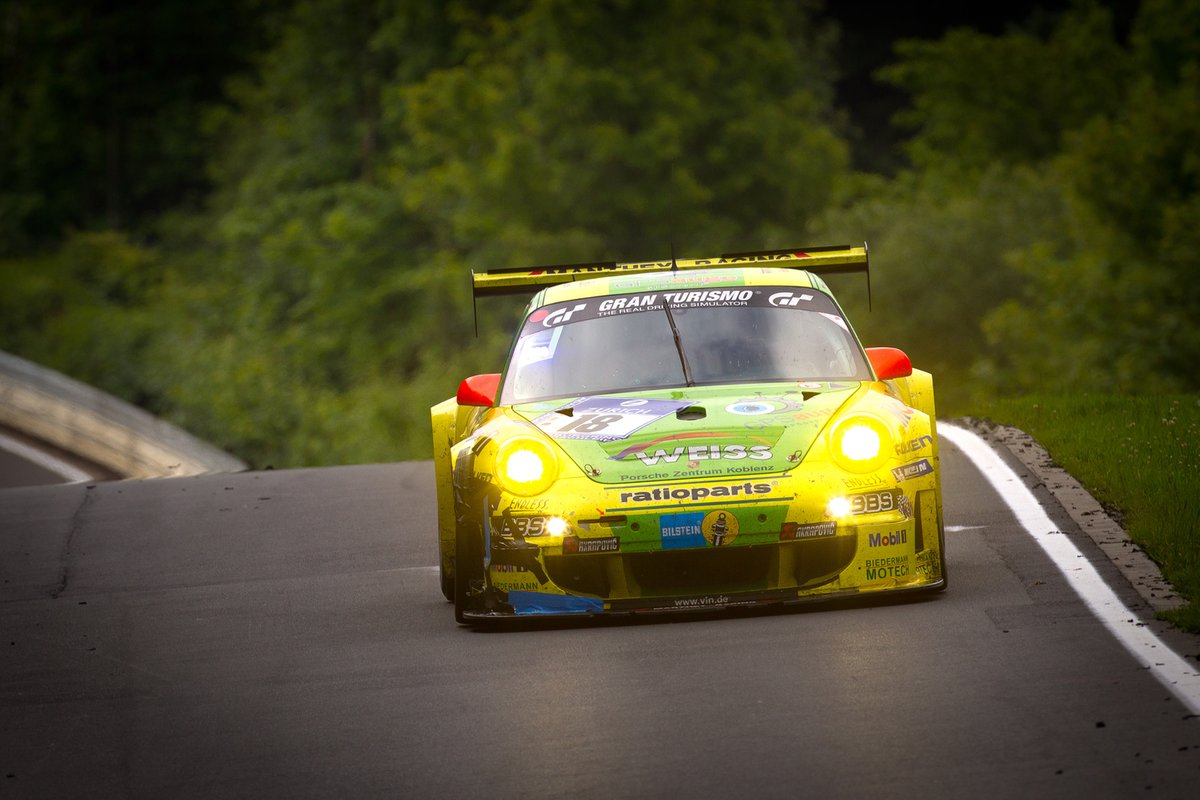 “He didn’t have much time to adapt, but I knew that he had the speed and this ability to adapt quick,” says Bernhard of the Pikes Peak hillclimb record-holder aboard VW’s ID.R electric beast, who also has two Spa 24 Hours victories to his name from 2003 and 2010. “He can also live with a bit of a freestyle, not having every detail of every piece of data puzzled together.

“He drives by feeling and he has his ability to make something out of nothing. That was one of his strengths, so I was not worried at all with him on the Nordschleife. He does rallies, he does all these kinds of crazy things so he knows how to survive in these environments.”

Where Bernhard was “probably more data-driven” of the pair, he appreciated that Dumas had complete confidence in his input.

“There was so much trust on both sides,” he says. “He would look at it, ‘Okay, Timo told me so it must be true’. He followed that and in the end, it just fitted together like a winning combination. Where you see nowadays [Kevin] Estre/[Michael] Christensen, this is something which built up over the years.”

Their long partnership was split by Porsche motorsport boss Andreas Seidl on Weissach’s 919 Hybrid LMP1 programme for 2014, the end of an era which Bernhard recalls “was definitely not easy”.

“In the end, they divided this to strengthen both cars, to split the experience over both cars,” he says. “It was a tough call he did, it was a bit of a sad point in the end. I remember after this call with Andreas, we called each other to say ‘Okay, it’s kind of a tough moment’. We both felt the same that it was like an end of an era in a way.”

Dumas went on to win a second Le Mans in 2016 alongside Neel Jani and Lieb after Toyota’s famous late implosion and secured the WEC title, with Bernhard adding his second the following year in Porsche’s swansong with the 919 Hybrid alongside Hartley and Earl Bamber.

They were reunited for a one-off in 2018 to share a 911 RSR GTE at Le Mans with Sven Muller, but their race was curtailed by suspension issues. But Dumas has driven for Bernhard’s GT3 squad, most recently at the 2019 Kyalami 9 Hours, so don’t rule out further tie-ups in the future between Porsche’s “twins”. 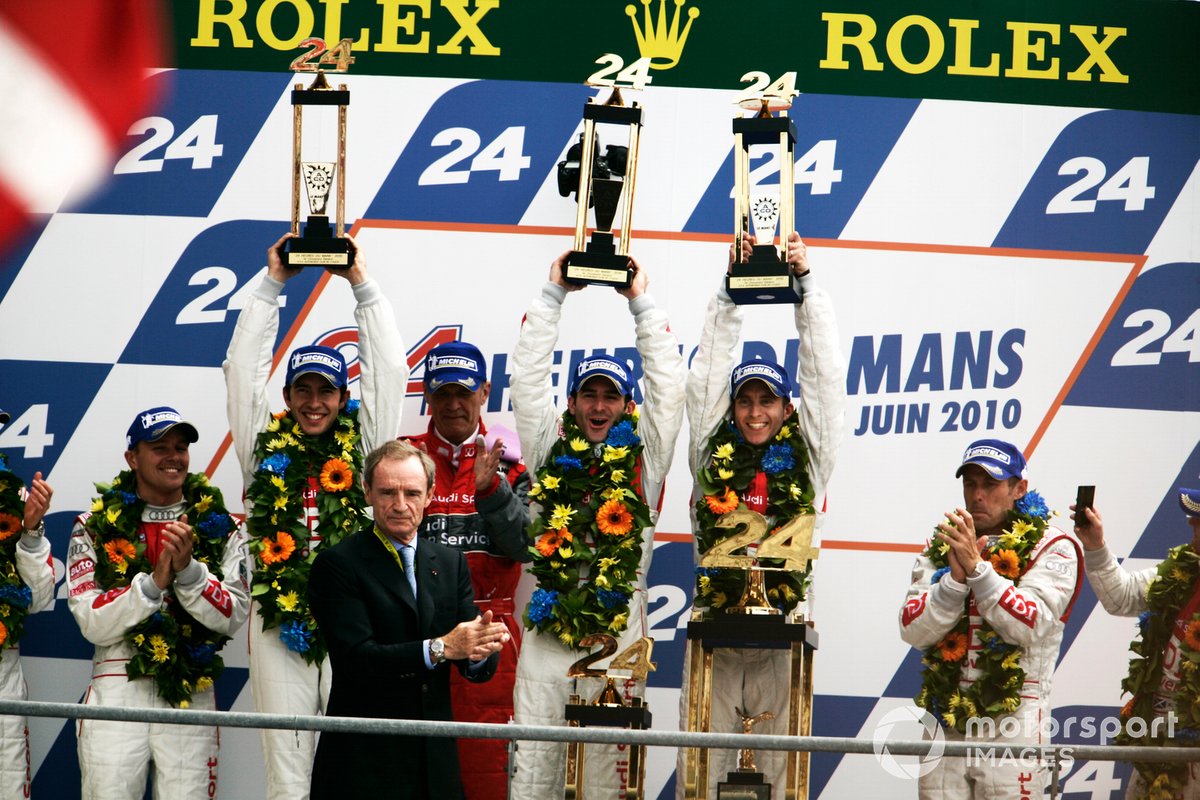 Dumas and Bernhard won Le Mans twice each, their mutual trust and complimentary skills making their partnership a formidable one