The 1967 Le Mans 24 Hours was billed – and is sometimes still remembered – as a Ford versus Ferrari battle. The fact Ford finished first and fourth, sandwiching two Ferraris, tends to support that. But in reality, it was a race that should always have been in Ford’s pocket, a sequence of events meaning that only the MkIV of Dan Gurney and AJ Foyt saved the American giant from an embarrassing defeat.

Ferrari had responded to its humiliation at the hands of Ford at the French Classic in 1966 with one of its greatest sportscars: the 330 P4. It was stiffer and lighter than its predecessor and also appeared more reliable, having humbled Ford by leading a Ferrari 1-2-3 at the Daytona 24 Hours in February.

But Ford’s approach to Le Mans was on an entirely different scale. Having ended Ferrari’s run of six consecutive run of Le Mans success in 1966, Ford entered four works MkIVs and three MkIIBs – essentially improved versions of the cars that had finished 1-2-3 in 1966 – the following year, spread across Carroll Shelby’s team and Holman Moody, Ford’s NASCAR arm.

The MkIV was the ultimate expression of the ‘GT40’ theme, was lighter than the MkIIBs and capable of over 210mph on the pre-chicane Mulsanne Straight, even with detuned seven-litre V8s that produced around 500bhp. Mario Andretti and Bruce McLaren had dominated the Sebring 12 Hours in April, the only other race the MkIV had entered.

Ranged against that onslaught were three factory Ferraris, plus an Equipe National Belge P4. The four-litre V12 was one of Ferrari’s gems, with three valves per cylinder, four overhead camshafts and Lucas fuel injection.

Private P3/4s were also part of the line-up, but these were very much second-string cars, with two-valve, carburettor-fed V12s. If the 450bhp P4s were sophisticated knives in a gunfight, the P3/4s were just there to watch.

The late Chris Amon, who had switched to Ferrari having won Le Mans with Ford the year before, knew which marque was the power to beat.

“As a team, Ferrari went to Le Mans in 1967 with high hopes and confidence, but personally – having driven the big block Fords in the preceding two years – I had serious reservations about being competitive due to the nature of the circuit,” he said in a 2016 Autosport interview.

“I expected us to be at least some 20mph down in top speed and, given the length of the Mulsanne alone, that was always going to be significant. I don't think Ferrari ever appreciated how good those big capacity American pushrod units were.”

Perhaps unsurprisingly, the highest Ferrari, driven by Mike Parkes, qualified seventh, 4.5 seconds slower than McLaren’s polesitting MkIV. But Ford did not have an easy practice.

All four MkIVs suffered cracked windscreens, plus there were tyre and handling issues. To give a sense of the scale of Ford’s 125-strong personnel operation, new windscreens were flown over from America, and a glue expert was brought in from Brussels. Solutions were found… 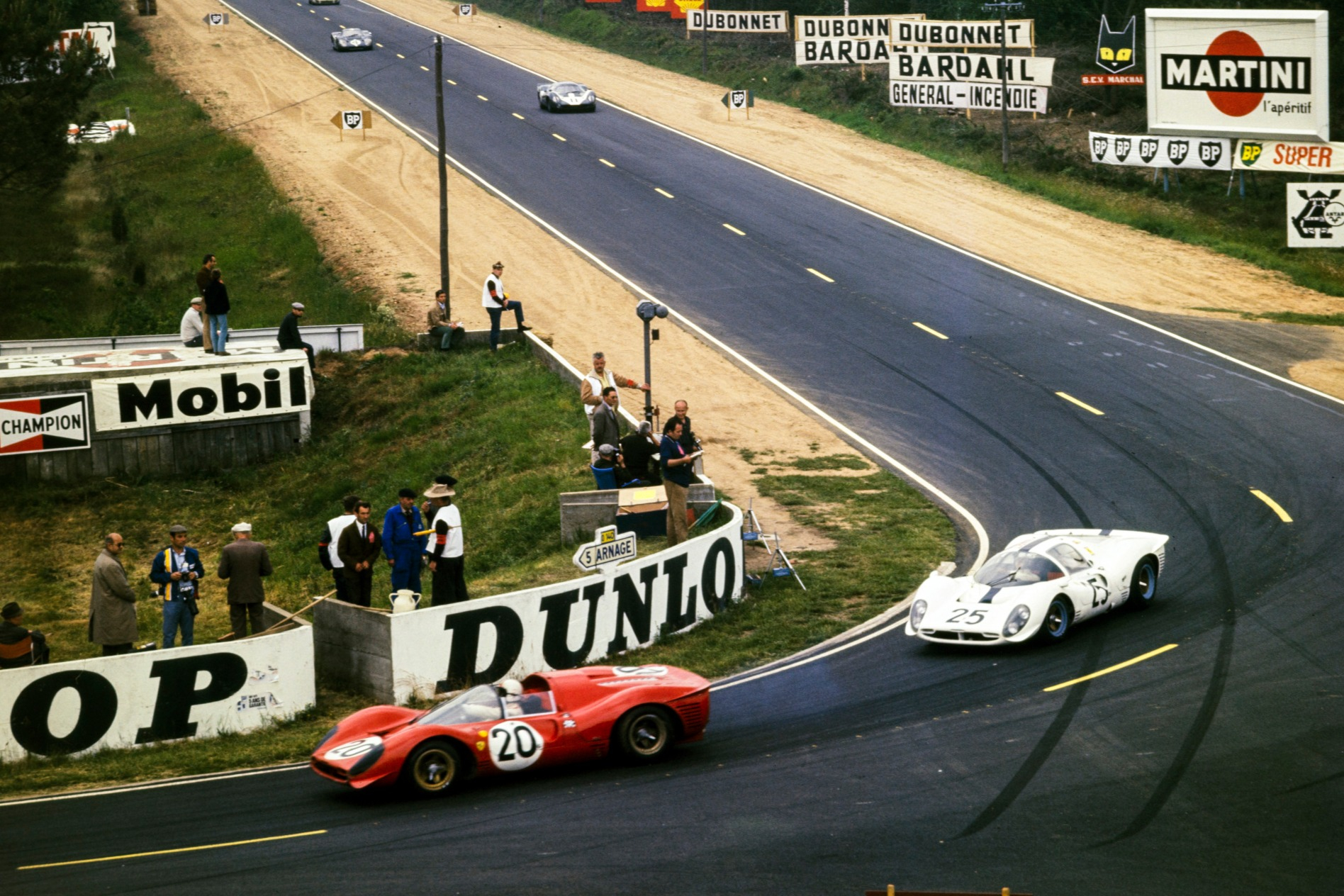 The quickest of the two Chaparral 2Fs – with unofficial support from General Motors – set the pace for most of practice. Only a late effort from McLaren prevented Phil Hill/Mike Spence starting on pole in the seven-litre Chevrolet V8-engined machine, which featured an automatic gearbox and moveable, high rear wing. Gurney, the 1966 polesitter, qualified ninth.

Foyt, in his first and only Le Mans, believes the real threat came from that #7 white car: “The one I was worried about more than anything was the Chaparral. All [marque founder] Jim Hall did was road racing so he wasn’t going to be beat easily.”

A few compromises also needed to be made so that Gurney and Foyt could drive together. “He was so much taller than I was, we had to put in a bubble,” Foyt told Autosport in 2017. “At that time, you didn’t have all these adjustable seats, so I was having to reach my arms all the way out, but we kind of split the difference.”

Then there was the spectre of intra-team rivalry at Ford. “Between Holman Moody and Shelby, it was two different race teams even though it was all owned by Ford Motor Company,” added Shelby driver Foyt. “We wanted to beat them as badly as they wanted to beat us.

“Shelby ran road courses all his life, so he knew what it took to win the race. It was kind of a war between the Fords. We basically had the same car, but I think we had a better one.”

Sure enough, after Ronnie Bucknum’s Shelby MkIIB led the early stages, Gurney moved into the lead and Ford – at least on paper – dominated the first half of the race, despite the presence of the Chaparral.

There were a few issues – Hulme’s MkIV suffered a sticking throttle; Frank Gardner’s MkIIB had its balance weights fall off; a stone broke the windscreen on the Lucien Bianchi/Andretti MkIV, which then had gearbox trouble; Bucknum/Paul Hawkins dropped out of contention with a broken water pipe – but it was an incident in the darkness of the early hours of Sunday that really loosened Ford’s grip on the race. 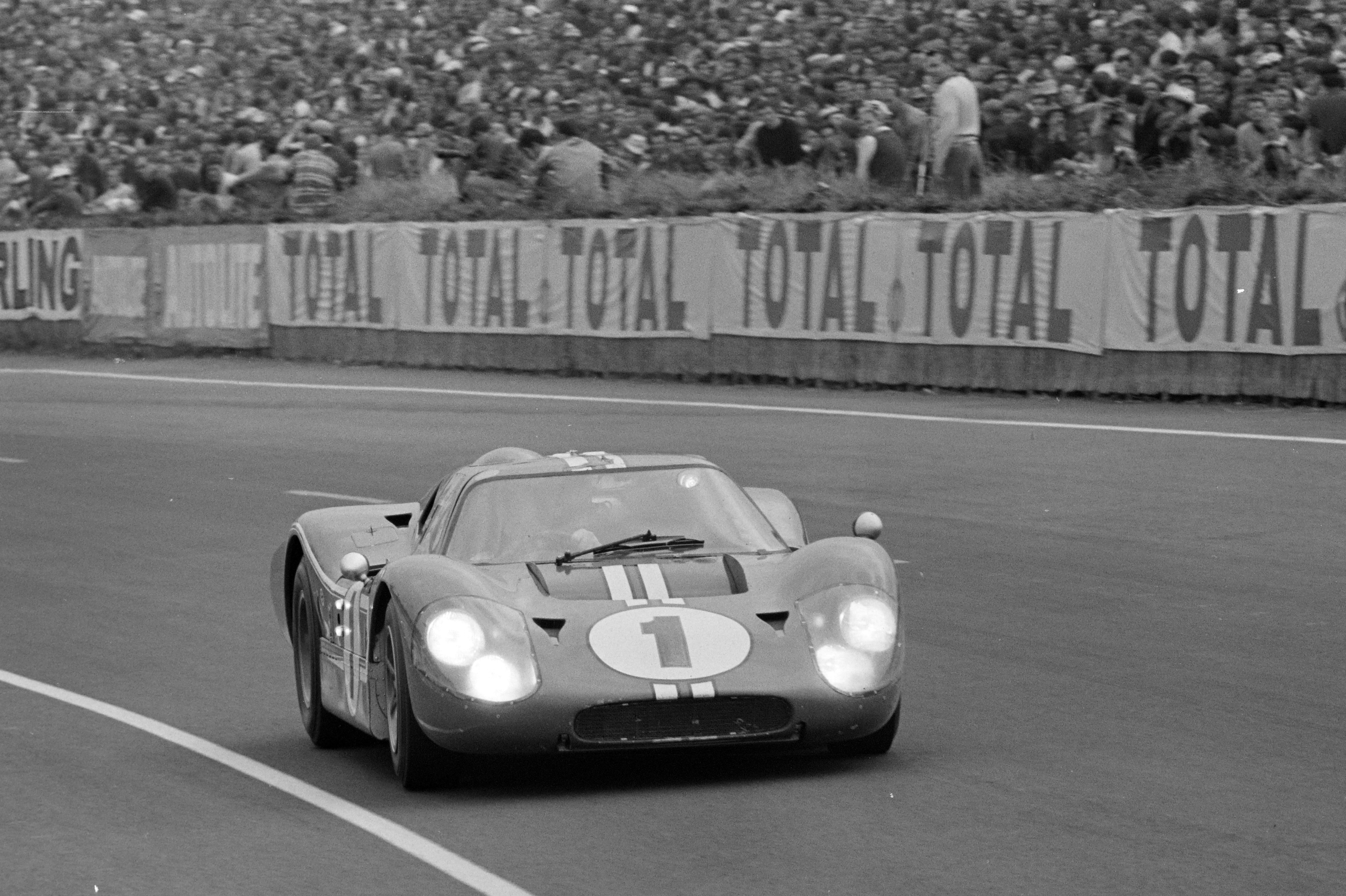 Just before half-distance, second-placed Andretti – on an out-lap after a brake pad change and in a hurry to make up for lost time – crashed approaching the Esses, bouncing between the barriers. Roger McCluskey (running ninth in the MkIIB shared with Gardner) shunted when he arrived on the scene and Jo Schlesser (sixth in the Ford France-entered but Holman Moody-run MkIIB) came over the hill and had nowhere to go.

Andretti and the team subsequently disagreed on the cause of the crash – pads fitted improperly or a driver pushing too hard on new pads – but the result was three (Holman Moody) Fords being eliminated.

"I don’t think that I ever ran over 70%. I know some of the newspapers said we were Ford’s rabbit, but I can say we were just fast and we didn’t have to punish the car too much" AJ Foyt

Ferraris were now in second and fourth, with the Chaparral third, and suddenly Ford looked outnumbered. Ferrari team manager Franco Lini decided it was time for Parkes/Ludovico Scarfiotti to up the pace in an attempt to break the only MkIV now ahead.

“Enough Fords had pitted for the wrong reasons that already people were wondering how long it’d be before Gurney’s bad luck would strike,” reckoned Car and Driver magazine.

But Gurney and Foyt were not about to be drawn into a fight. Despite leading, Gurney had been backing off the throttle before hitting the brakes, particularly approaching Mulsanne Corner, where the heavy Fords had to slow from 210mph to around 35mph, from the start.

At one stage, Parkes tried to tempt Gurney into a tussle, coming up behind and flashing his lights, but Gurney had a novel way of dealing with the Ferrari.

“I had learned from [former Le Mans racer and team boss] Briggs Cunningham, who was always ahead of me at the end of the race, so we never ran it that hard,” said Gurney shortly before his death in 2018. “I just pulled off to the right after leaving Arnage and stopped, and Mike pulled up and stopped right behind.” 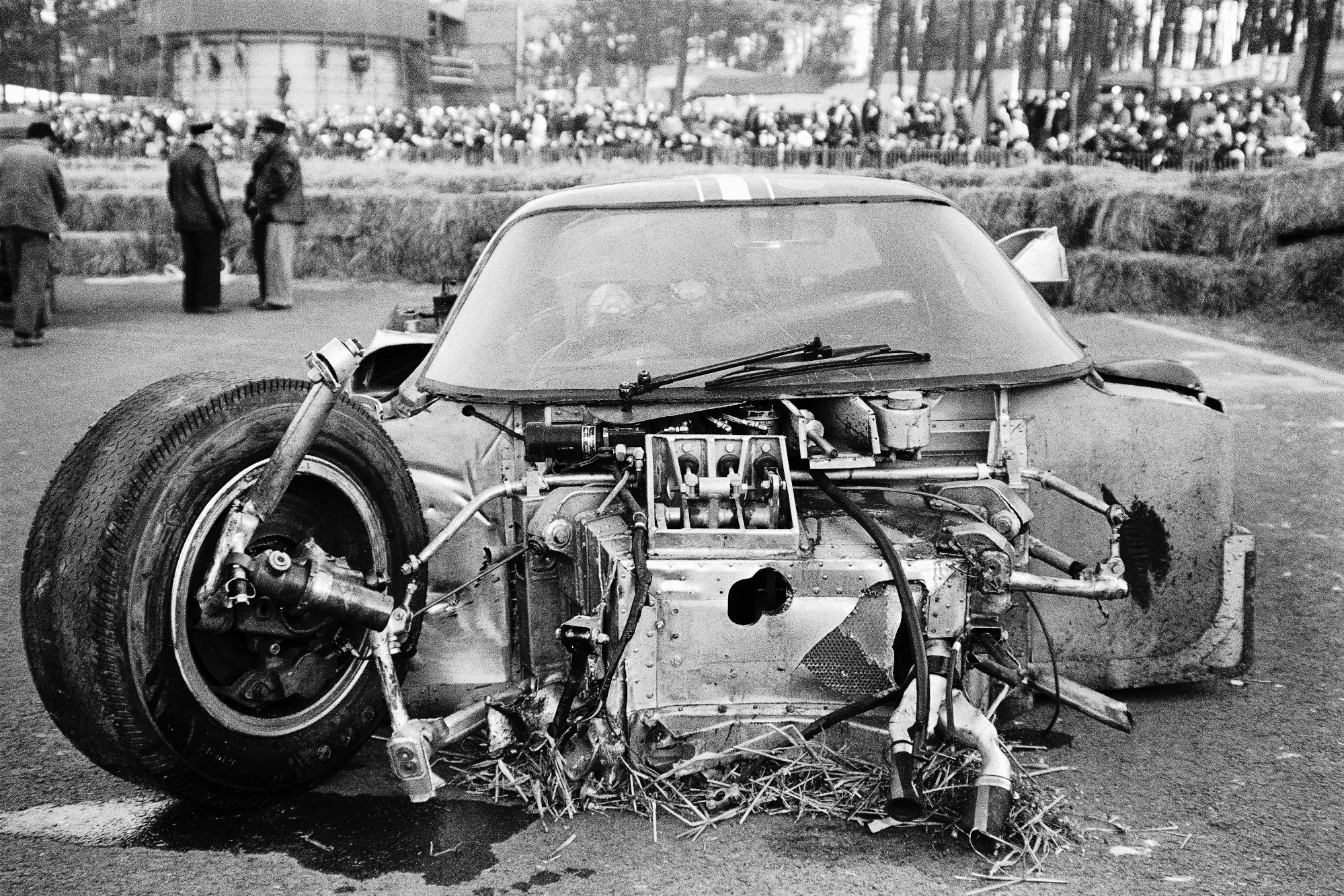 After a few seconds, Parkes gave up and got going again, but was caught by Gurney shortly afterwards.

Despite his reputation as an Indycar hard-charger, Foyt too was conscious of keeping the MkIV in one piece, particularly given the pace advantage it enjoyed: “I don’t think that I ever ran over 70%. I know some of the newspapers said we were Ford’s rabbit, but I can say we were just fast and we didn’t have to punish the car too much.

“You had to be on your toes in traffic. One time I ran up to a bunch and I thought I was going to scatter them all over. I missed them all, but I didn’t think I was going to. We were so much faster on the straight, it was a hairy race.”

The Chaparral’s challenge finally ended on Sunday morning with transmission woes, but Ford’s concerns were raised again with a quarter of the race still to run when McLaren had his engine cover/tail fly off. He retrieved it on the following lap, but now Gurney/Foyt had no support at all, and were called in to have their cover taped up as a precaution. If anything happened to the leader, it would be game over for Ford.

Ferrari had lost two P4s – the Amon/Nino Vaccarella P4 when a puncture caused a fire and the Peter Sutcliffe/Gunter Klass entry to engine failure – but Parkes/Scarfiotti and Willy Mairesse/Jean Beurlys cars kept up the chase.

“Ford may be leading, but there are healthy sounding Ferraris following and the remaining Fords are sick,” said Gregor Grant in Autosport’s report.

The challenge was too great, however. Gurney/Foyt, who had at one stage built a seven-lap lead despite never extending the car, kept going and eased their way to victory. “Somehow none of the myriad troubles and calamities had touched the Gurney/Foyt MkIV, which ran like a perpetual motion machine,” said Car and Driver. 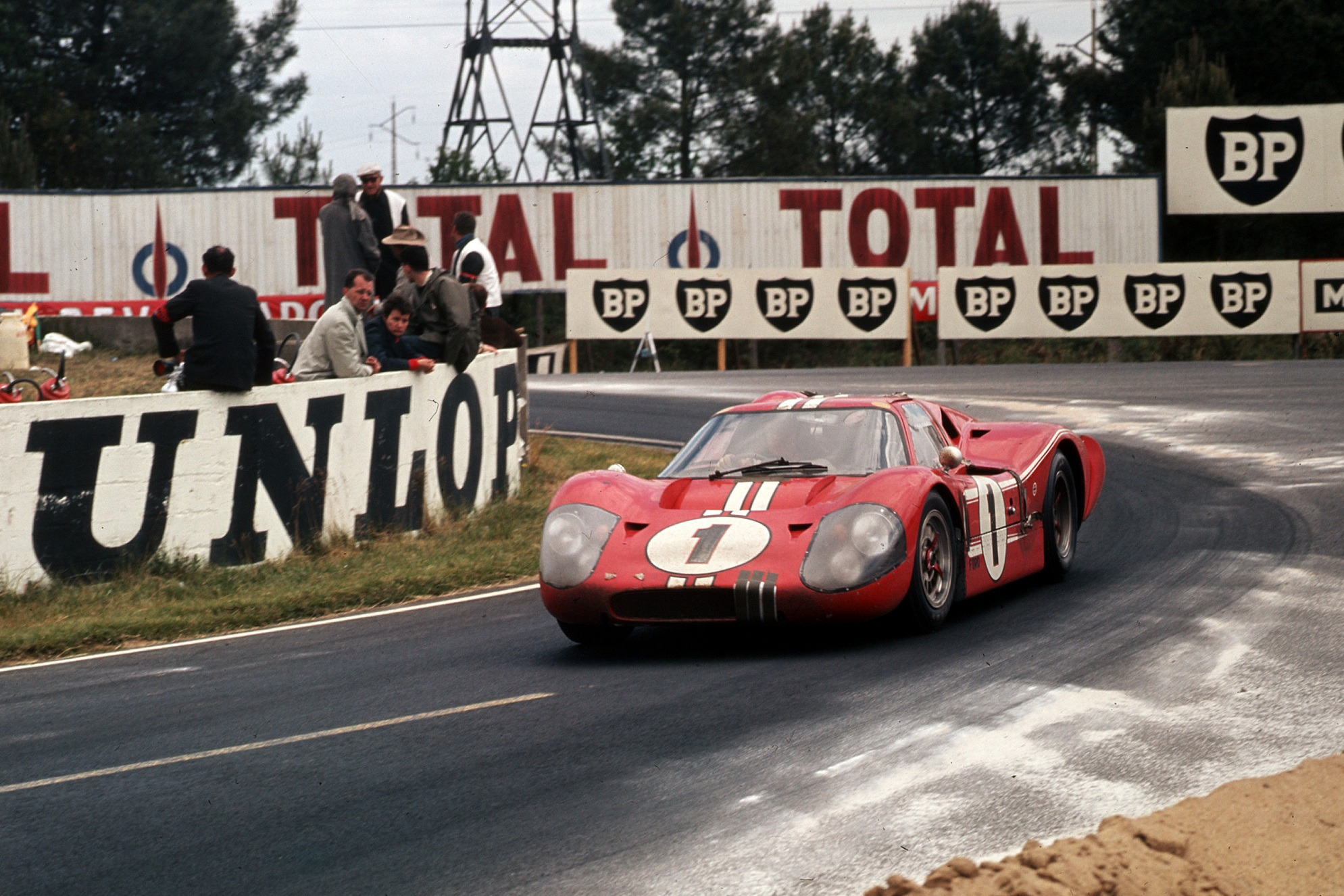 Even Foyt having to do an extra stint, when Gurney could not be found, failed to halt the #1 car’s domination.

In the process the all-American combination averaged over 135mph and smashed the Le Mans distance record – covering 28 laps more than the 1966 victors and 40 more than the 1965-winning Ferrari – to justify Ford’s multi-million dollar programme in front of over 300,000 spectators.

The crushing pace was underlined by the fact that just 16 of the 54 starters finished.

The right car had won, but the P4 had not disgraced itself. The second and third-placed machines had also covered more ground than the 1966 winner – and recorded more laps than any Ferrari had in the history of the race.

Along with the 1973 edition, the 1967 Le Mans 24 Hours is the closest Ferrari has come to adding to its nine victories in more than half a century. 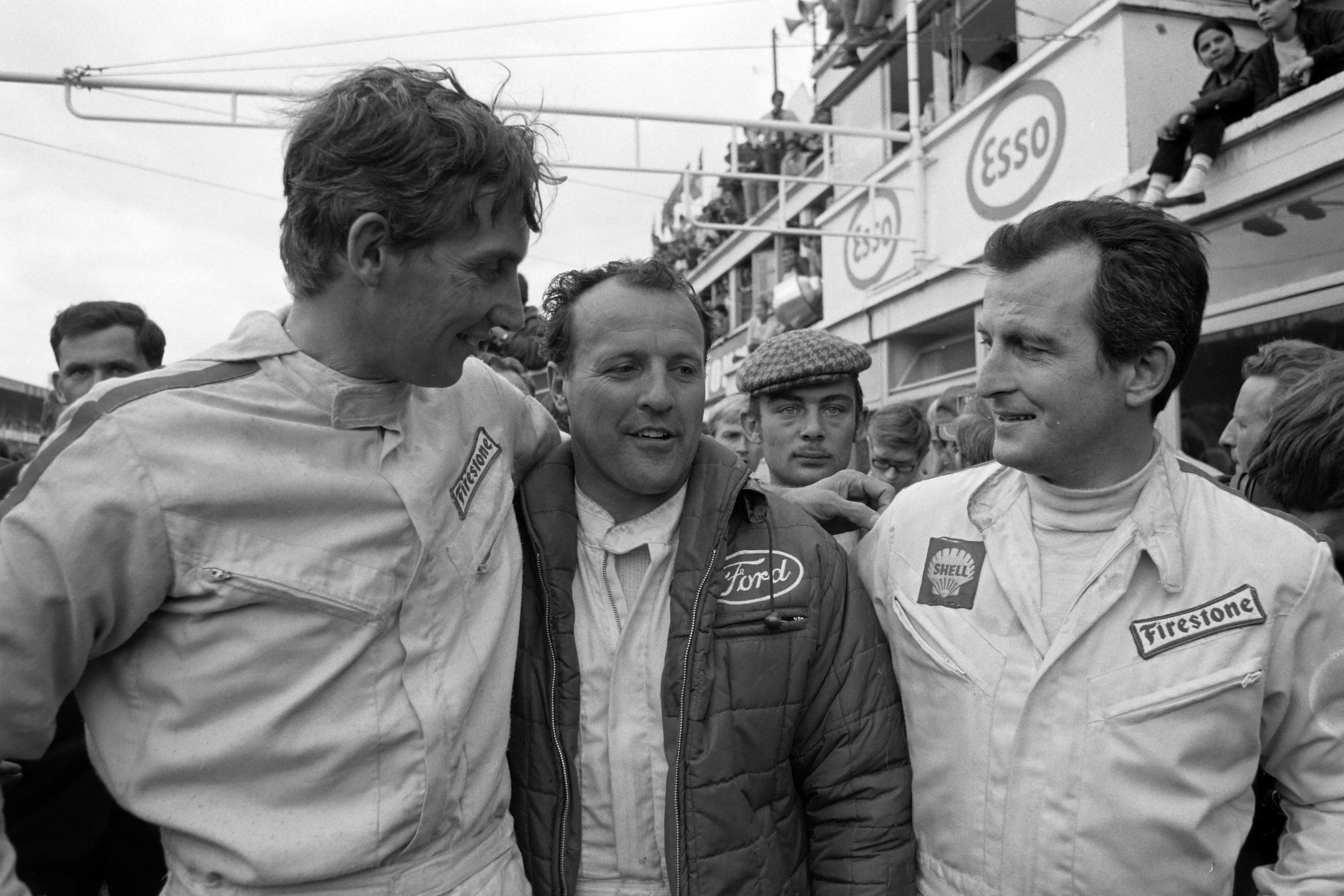