Fernando Alonso found the windy conditions during day three of practice for the Indianapolis 500 "tricky", but described the experience as productive

The McLaren Honda Andretti driver ended the day fourth fastest with a lap of 219.533mph, compared to pacesetter Ed Carpenter's 222.894mph, and on a day when most completed limited running he was satisfied he had put his 39 laps to good use.

"It was tricky, definitely," said Alonso of running in the windy conditions.

"The conditions today didn't help, so [there was] very little running for the big guys, but for me any condition is still a good lesson.

"So today was about that, learning how to drive with these strong winds and how to set up the car corner-by-corner.

"Everything went according to plan. The team used those runs also to test something in the background on engine tuning, so it was a productive day." 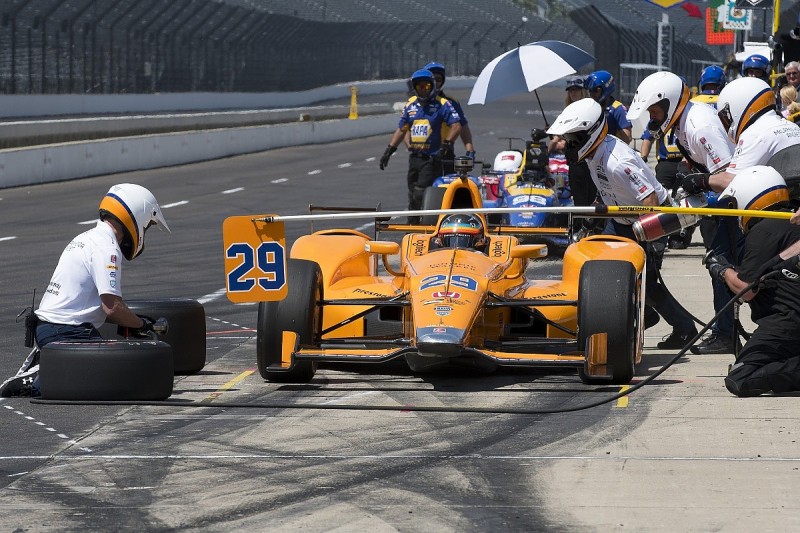 Alonso also completed a series of practice pitstops during the middle of practice.

Even though he was using the practice pit-entry rather than the one that will be used for the race, Alonso believes this will further advance the learning process.

"We used the middle of the day to do some pitstop practice, not only for me but for the guys as well," he said.

"We learned a couple of things on their side and also on my side, how to approach the fast lane, the slow lane, because obviously in practice it's OK but on race day when 33 cars will pit, there will be a lot of traffic here."

Alonso added that he is enjoying the experience of being at Indianapolis, despite the growing fan interest in his participation.

"There is a lot of support here from the fans, they get very close to us here in the pitlane, in the garage.

"It seems that everywhere I go they follow me.

"I think some of the other drivers are taking advantage of that. They wait [until] I go, then they go without trouble.

"That's the way it is, I'm new here so they all need the autograph for the first time.

"I hope tomorrow they don't need it for the second time."

Fernando Alonso won't get help from team-mates in Indy 500