Will Power: Robert Wickens can be an IndyCar champion

Schmidt Peterson Motorsports rookie Robert Wickens can become an IndyCar champion as early as this season, says Penske's Will Power

Power defeated Wickens at the Indianapolis road course last weekend after a caution caused by his team-mate Josef Newgarden created a late dash to the flag.

But that meant Wickens scored his second podium in five races, after taking pole on his series debut at St Petersburg where he came close to winning the season-opener, and did likewise at Phoenix.

Power higlighted Wickens's inexperience in saving fuel, but still believes his rival can be the champion in 2018.

"I haven't raced him enough, but we passed each other twice no problem [at Indianapolis] and it was clean racing," Power said. "He's obviously very good.

"I think big fuel saving is probably a new thing for him - Dixon and myself have been doing it our whole careers and we're used to trying to extract lap time and fuel save.

"But I tell you, [Wickens] has been racing at a high level for a long time. He's definitely a guy that will be a champion in IndyCar.

"I have no doubt in my mind, at some point and in the right situation, and that [title] could be this year."

Power added that the decisive moment in his victory came at the final pitstop after Newgarden's caution, where he beat Wickens out of the pitlane.

"Yeah, that was the key to the win there, my guys getting me out in front of Wickens with that final stop - just literally a nose ahead," he said.

Power had to then fuel save while managing his tyres to avoid a quick late stop for a fuel top-up, but he explained that "every lap felt like qualifying".

"I drove just absolutely perfect all race, just hitting my marks, hitting my brake points and just really extracting the most out of the car," he said.

"You save fuel but you push like qualifying because you've got to make the time up in the corner as you're saving the fuel.

"So it's not like it's easier to go fast and save fuel. It's very tough." 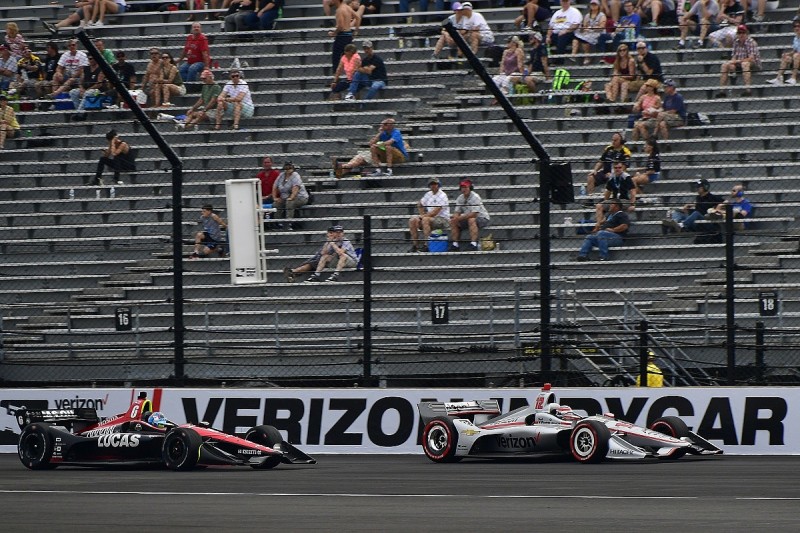