Pagenaud took a 43-point lead into this weekend's double-points decider and then added the bonus for pole on Saturday, when Power could only qualify fourth in a Penske top four sweep behind Helio Castroneves and Juan Pablo Montoya.

That result means Pagenaud just has to finish in the top five to seal his first series title.

"Ultimately I didn't have the pace," said Power.

"I honestly need to win the race to win the championship, and he has to have a bad day."

Last year's championship was settled on a tiebreak, with Scott Dixon's victory tally getting him the nod over Montoya when they finished the year equal on points.

Pagenaud and Power are level on four wins each this time.

Power believes a chaotic race or tactical gamble would be his best hope.

"I think it's going to be a four-stopper. That makes for a lot of interesting stuff to have strategy-wise," he said.

"The last thing we need now is a straightforward race because Simon will be tough to beat if that's the case."

Pagenaud's pole was his seventh of the season and he also set a new track record of 1m16.2530s in the first part of qualifying. 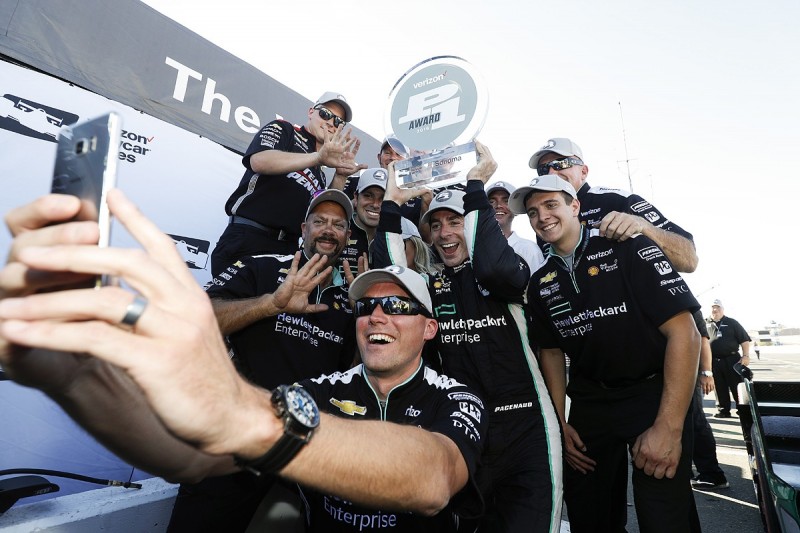 "Obviously the Penske car has been amazing. We certainly prepared really well in practice. Everything went perfectly all weekend so far.

"It was about preparing the car for the Firestone red [softer] tyres, which we know I'm always more comfortable on, so I can always extract a little bit more from myself.

"The first lap I put the Firestone red tyres on, I went on the radio and said 'wow, this is going to be good'.

"Seven poles this season, four wins. No matter what happens [with the championship], it's been an incredible season."

Pagenaud had a muted first season with Penske in 2015, when he failed to win a race, took just two podiums and finished 11th in the championship.

But he was competitive from the outset in 2016.

"I had the time to develop my car into what I like," said the Frenchman, who began Saturday with the announcement that long-time IndyCar team owner John Menard will substantially expand his sponsorship deal with Pagenaud's entry for 2017.

"  Last year was one of those seasons where it was a transition. We found at the end of the season what I really needed to go find a little bit more.

"The Chevy aero package is also suiting my style really well. In addition to that, we've been able to find some little tricks on the set-up.