Castroneves, who claimed his first IndyCar victory in three years at Iowa last weekend, set a best lap time of a 1m01.1211s during the 45-minute session.

That left him 0.3887 seconds clear of team-mate Josef Newgarden, who improved late on to jump reigning champion Simon Pagenaud for second.

Points leader Scott Dixon was fourth fastest and five tenths off the pace after a flurry of laps towards the end of the session hoisted him up the order, with a red flag midway through the session for debris briefly stopping drivers' runs.

Tony Kanaan was eighth and completed only eight laps, with the Chip Ganassi Racing driver opting to save his tyres for further runs in Friday's afternoon session. 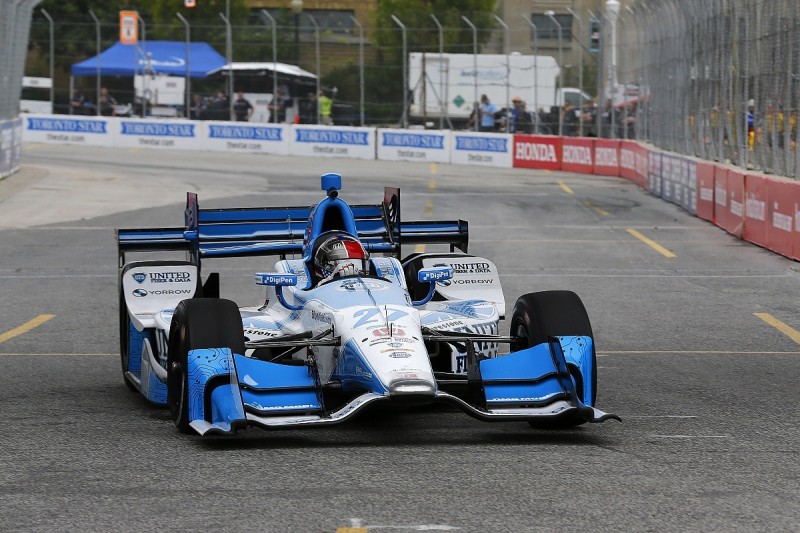 Early pacesetter Marco Andretti looked as though he might round out the top 10 alongside Max Chilton, but the pair were bumped from those spots by Ryan Hunter-Reay and Takuma Sato at the end of the session, who instead slotted into ninth and 10th respectively.

Chilton spun at Turn 8 while on a hot lap and stalled his car, which required the marshals to restart him with just a few minutes left in the session.

He was unable to improve as a result, and dropped to 14th at the finish.

Last year's Toronto winner Will Power was 16th fastest with a best lap of 1m02.224s, which left him a second off the ultimate pace.