The 2004 Indy 500 winner was just 13th in the morning's hour-long session but climbed to the top of the times early in the afternoon.

He was deposed by Chip Ganassi Racing driver Scott Dixon just before the midway point of the afternoon before a yellow flag flew for a track inspection.

The speeds set by the frontrunners suggest that the significant reduction in downforce has not slowed the cars down at Indianapolis, with the acceleration on the straights making up for any cornering deficit.

In a relatively uneventful session, Penske had notably practised drafting and pack running as it briefly lifted Will Power to the top of the times, before Pagenaud asserted his claim to second.

Two last-minute improvements meant that Marco Andretti finished the day in third, having topped the morning's hour for the Andretti team.

Harding Racing, which impressed at last year's Indy 500, went fourth with Gabby Chaves (pictured below) at the wheel. 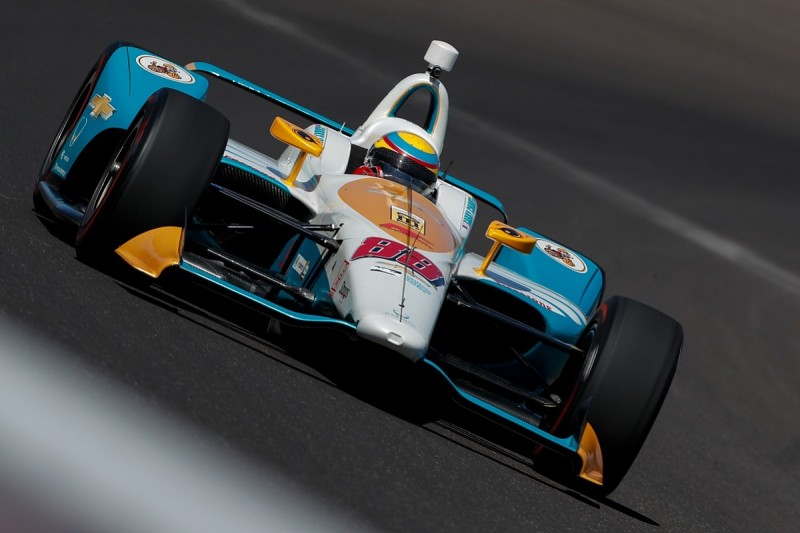 Dixon would end up fifth ahead of the fellow Honda-powered entry of Sebastien Bourdais.

Spencer Pigot was another driver to improve late on, edging out Ed Jones for seventh.

Ed Carpenter's best time was good enough for ninth as his team's Indy 500 addition Danica Patrick watched on from the team's pitwall.

Penske's Helio Castroneves built on his IndyCar return at Barber's open test to go 10th and made it six Chevrolet-powered cars inside the top 10 at a venue where Honda has recently had the edge.

Charlie Kimball was a decent 13th behind Graham Rahal and Power as Carlin languished at the bottom of the times early in the day.

Reigning champion Josef Newgarden was 14th, oddly running one of Power's nosecones late in the day, coming out ahead of defending Indy 500 winner Takuma Sato.

Schmidt Peterson Motorsports brought up the rear with Jack Harvey 20th ahead of last-placed Jamies Hinchcliffe.

The session ended with Newgarden preparing to test the windscreen in its second outing, while on Tuesday Indianapolis will host the rookie and refresher tests.