Penske had taken a 1-2-3 in qualifying with Josef Newgarden leading Simon Pagenaud and Will Power, but two of the leading three were rendered virtual onlookers on race night.

Newgarden lost the early lead of the race due to a combination of significant tyre blistering - requiring an extra stop - and Chevrolet's fuel-mileage disadvantage compared to Honda.

Wickens pitting from the lead at the halfway point gave Dixon the platform to go on to win.

The Ganassi driver, who had not led a lap in 2018 until last weekend's Detroit double-header, cruised to the front of the field.

But his lead was eradicated when Ed Carpenter turned in on the low-running Wickens and wiped the pair out on lap 173 of 243.

The leaders pitted for fuel and tyres under caution and Dixon lost chief rival Rossi due to a slow pitstop caused by the Andretti car's fuel hose initially failing to engage.

Dixon was again forced to hold his lead on a restart when Penske's Will Power collided with Dale Coyne Racing driver Zachary Claman de Melo and set up a 24-lap dash to the finish.

His charge to the flag was then completed virtually unchallenged, meaning Dixon opens up a 23-point series lead, after Pagenaud was dragged into holding off the fast-charging Rossi for second. 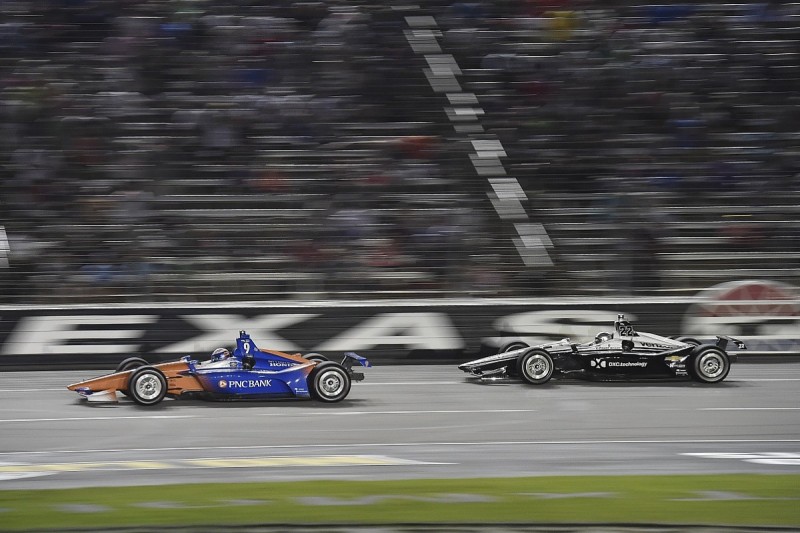 The Penske-run car of Pagenaud was the least affected by the tyre wear, while Rossi again starred on ovals with a series of overtakes that lifted him from eighth into the leading pack for his fifth podium of 2018.

SPM's James Hinchcliffe finished fourth after complaining of a slow car in Friday's qualifying that put him 15th on the grid.

He worked his way onto the lead lap but fell back a couple of places under the late restart.

Ryan Hunter-Reay was fifth for Andretti ahead of Rahal Letterman Lanigan Racing's Graham Rahal who continued his habit of racing well on ovals after qualifying poorly, having started the race in 20th.

His team-mate Takuma Sato was seventh ahead of his long-time battler Sebastien Bourdais in the DCR car run in partnership with Vasser and Sullivan.

Bourdais had been hurt by the Wickens/Carpenter-induced caution having been the first driver a lap down, alongside Newgarden, but recovered prior to the final yellow.

Ed Jones was ninth ahead of Carlin's Charlie Kimball in the British team's third top 10 result.

Newgarden ended the day in 13th after a woeful night was completed with a drivethrough penalty for jumping a restart.

He finished ahead of Marco Andretti, who lost a potential top-five finish to a stall in the pitlane.

AJ Foyt Racing had a nightmare race when Matheus Leist caused the first caution of the day on lap seven when his car caught fire.

Team-mate Tony Kanaan retired shortly later after colliding with the Turn 2 wall in an incident believed to be caused by a suspension-related failure.