Franchitti went airborne when he clipped the rear of Sato's AJ Foyt Racing car on the final lap, the debris also inflicting minor injuries on spectators and one IndyCar official.

"My biggest concern was Dario, the 12 spectators and the IndyCar official," said Sato, "and I hope they have a speedy recovery.

"On Sunday night I went to see Dario, and after his successful surgery on his ankle I saw him at 11pm. We had a nice chat - he is such a strong guy and he was joking and smiling, obviously a little dizzy from the anaesthetic, but we had a good conversation. We need him back in the cockpit soon."

Sato believes that damage from a brush with the wall caused his Dallara-Honda to get sideways in front of Franchitti's Ganassi car.

"It looked like it was going to be a very close finish with Simon Pagenaud [for sixth place], and I didn't know if I could gain a position but at least I wanted to try," said Sato.

"As a result of that battle I put a wheel on the kerb at Turn 8 [on the penultimate lap], the car bounced and I ran wide, I caught the marbles and brushed the wall on the exit.

"Because the field was so close together I lost a few places and we think I might have damaged a toe link at the rear. From there all the way around to Turn 4 on the next lap it's all left-hand corners. I could feel the car drifting and had so much marbles on the tyres.

"At that point, I was just doing what I could to finish the race. But as soon as I got to Turn 5, which is right-handed, it was fully loaded on the left rear where possibly I had the toe-link problem. 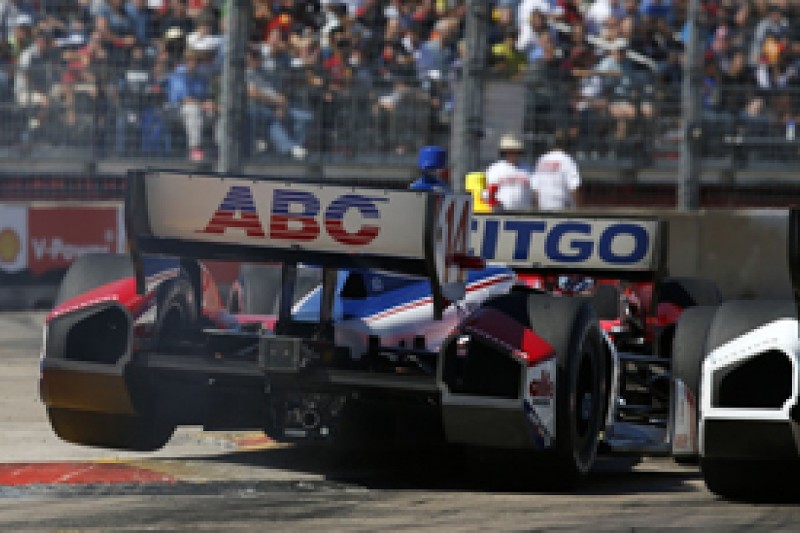 "It's a very tricky corner and I tried to hold the inside line, but unfortunately I had a sudden huge snap oversteer and drifted wide one car length, just as Dario was overtaking me. It was a huge accident at very high speed."

"It was a massive impact," he said. "There's a huge hole in the right-hand side of the car, through the bellhousing.

"It was nearly like what happened in the Austrian Grand Prix in 2002, but fortunately EJ hit me on the hardest part of my chassis, whereas Nick Heidfeld hit the softest part!

"Although it was a huge impact, there was absolutely no damage to the monocoque. I have little bruises, but it's nothing, and I'm very thankful for the improvements in modern chassis design."