Sato employed a three-stop strategy - the approach used by the bulk of the field - from pole position, pitting on lap 17 and 37 of the 90-lap race.

Taking on Firestone's Black tyres on each occasion, the 2017 Indianapolis 500 winner had cycled back to the lead of the field when the caution flag flew for the first, and only time, on Lap 57.

That came following contact between Tony Kanaan and Max Chilton, ending with the Carlin driver nosed into the pit-entry barrier, while further around the track erstwhile front-row starter Graham Rahal came to a halt as race-long engine problems reached a terminal stage.

Sebastien Bourdais, from fifth on the grid, was the sole front-runner to employ a two-stop strategy, which allowed the Dale Coyne Racing man to take a podium finish in third.

Bourdais, who made his second scheduled stop in the caution period, put pressure on Chip Ganassi Racing's Dixon for position on the restart, but was not able to find a way past the five-time champion.

After a troubled weekend, Team Penske, which had won six of the last nine races at Barber, rescued fourth courtesy of Josef Newgarden, who forced his way through the field from 16th on the grid.

Newgarden ran the harder tyres during his middle stint and forcibly passed James Hinchcliffe during the final stages.

Newgarden was the lead Chevrolet-powered driver in a race dominated by Honda, with ninth-placed Penske team-mate Simon Pagenaud the only other of its representatives in the top 10. 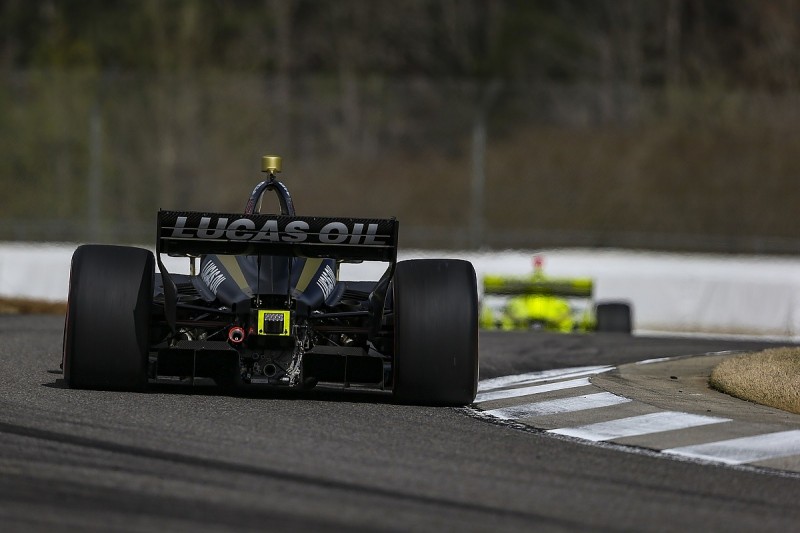 Ex-Formula 1 driver Marcus Ericsson brilliantly executed his own three-stop strategy, rising from 20th on the starting grid to claim a season-best finish of seventh place.

Ryan Hunter-Reay was eighth, ahead of the aforementioned Pagenaud, while Dixon's Ganassi team-mate Felix Rosenqvist capped the top 10.

Will Power endured a tricky race as worsening tyre wear contributed to a lap 28 spin that forced the 2014 champion into a four-stop strategy, classifying 11th.

Austin winner Colton Herta's Honda-powered Harding Steinbrenner Racing machine developed a fuel pick-up problem in the first half of the race, leading to his retirement around mid-distance.