SPM endured a torrid Month of May in which Wickens's team-mate James Hinchcliffe failed to qualify for the Indy 500 and Wickens crashed in practice ahead of the race.

Wickens then ran off-sequence compared to the leaders, meaning he often cycled to the front of the pack, and he was awarded the rookie of the year award for his ninth place finish.

When asked if he found tracking strategy difficult, Wickens said: "For sure. I didn't know who was on the best strategy, when people were pitting.

"We were actually getting great fuel mileage the whole day. We kept on going a couple laps longer than everyone else.

"I think because of the tyre degradation the undercut was actually pretty aggressive. I felt like we had great pitstops.

"The team did a great job there. We never lost spots, but we definitely weren't making progress through the pits.

"It wasn't down to the guys [on pitwall]. I thought it was more tyre degradation.

"The Honda engine was giving us great fuel economy. We were able to push it longer than anyone else most of the time.

"We were lining up there to be pretty sweet with making the fuel mileage, one more stop [after Sebastien Bourdais crashed at three-quarter distance].

"Me and Oriol Servia, we were one-two, maybe we could do something. Unfortunately, the last yellow [caused by Tony Kanaan] made it [the strategy] possible for a lot of people." 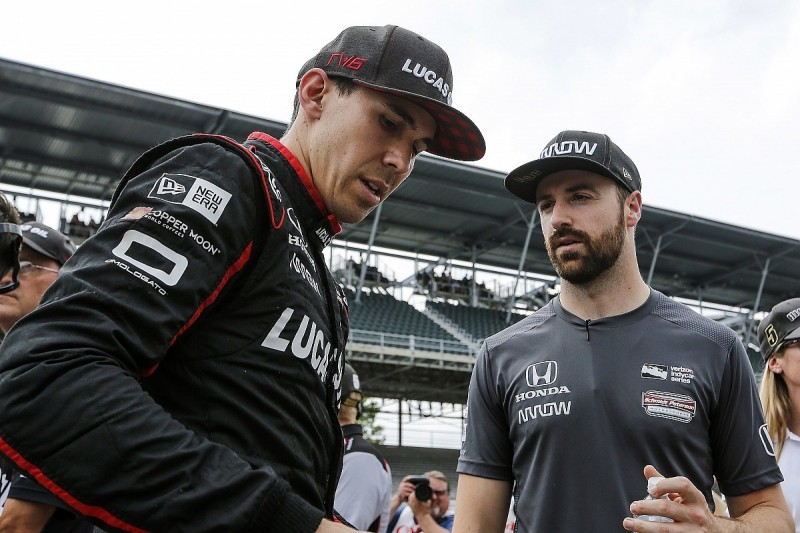 Wickens added that having Hinchcliffe present on race day helped him "a lot".

"Within our structure at Schmidt Peterson Motorsports, there's only one person speaking to the driver," added Wickens. "I actually don't know if James was giving input during the race.

"Having him there, he's probably the most supportive team-mate you could ever ask for.

"Even before the race, I was picking his brain, asking how it is on the outside-right off the start. He was kind of telling me the dos and don'ts, some last minute words of wisdom.

"It helped me a lot, gave me that little bit of extra confidence to sail it around the outside on Turn 1 on the start."

SPM has been the surprise package of the 2018 season, but Hinchcliffe's failure to qualify was followed by the team parting with his race engineer Leena Gade.

Wickens denied that SPM had to recover momentum in the Indy 500.

"I feel like we never lost momentum, that's the big thing," he said. "We're such a strong team.

"We understand what happened on the #5 [Hinchcliffe's] car. I think [it's a] lesson learned. Things are implemented now that will never happen again.

"It's a competitive championship. We learnt first-hand with James that if you're not perfect, you can be at risk of being knocked out. That's what happened to him."

The big talking points from the 2018 Indianapolis 500

Why IndyCar stars crashed out of the Indy 500 - video