As a full-time rookie, Wickens was required to complete three phases of short runs at varying speeds in order to compete in the Indy 500.

He was one of three drivers who ran in the rookie test and was the last to complete the programme after a gearbox problem delayed him.

"James wasn't even at the track when we switched, he had no idea," said Wickens. "Everyone at Schmidt Peterson Motorsports is 'one team, one dream'.

"It's not the first time I've driven his car, it's the third time [having conducted a DTM/IndyCar ride swap in 2017].

"It was a tricky morning. We had a gearbox issue on my car after the first phase of the orientation.

"We had to scramble a little bit to get James's car ready because it wasn't scheduled to be going on track, so we had to do some quick fixes and get everything ready to go.

"It wasn't ideal because we didn't really do a seat fit for me in his car. Apart from the seat going in, everything was more 'get on with it, get the orientation done'.

"We were actually a little pressed for time to get all the phases through in the time allocation we had." 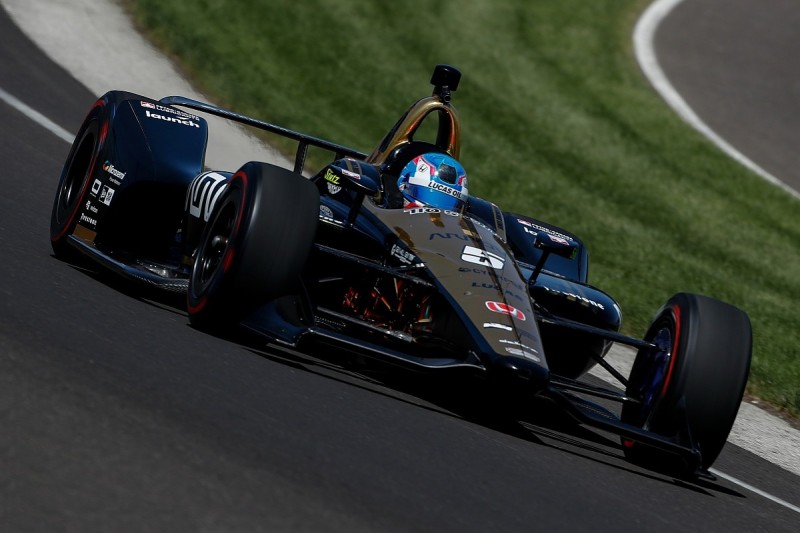 Wickens found the slower speeds of phase one surprisingly difficult.

"It's the first time in my life that I was lifting the entire straight to then go full throttle on a corner, which was a little weird. But then you learn.

"I thought the 210mph to 215mph phase was a really good phase to learn. When you're going that slow, you're not really taking the line, the car kind of just goes where it wants, you're kind of going too slowly.

"Once you got up to around the 215mph mark, it started reacting, feeling balance issues with the car.

"Before you're more or less cruising around at a speed where the car is not happy, they're set to be going 220mph, 225mph.

"We actually have a lot less downforce on the car than what we would be when we're doing normal laps. It was kind of a bizarre feeling."

Wickens switched to IndyCar after being based in Germany for his Mercedes DTM stint. He compared the extensive preparation for the Indy 500 to drivers racing on the Nurburgring Nordschleife.

"It might be a surprise to a lot of people, but to race at Nurburgring Nordschleife, it's like a one-week course," he said.

"You actually have to go around in a bus, get a lesson on every single corner by certified instructors, you have to get a licence to race there. This is no different."